The Quiz has every super-power you haven’t thought of yet. Any power, one at a time, however she wishes. She can :

People aware of the Quiz’s nature may attempt to think about powers to strip her of such, but the list of possible super-powers is essentially infinite.

The Quiz tends to start with simple powers such as laser eyebeams and flight. She’ll then manoeuvre with superspeed or teleportation, using increasingly subtle and weird powers. So for instance she may finish her opponents off with powers such as “the power to create escape-proof spirit jars”.

The Quiz is an unnamed Japanese woman. She was recruited by Mister Nobody, the illuminated surrealist activist and madman, as a part of his first Brotherhood of Dada.

The Brotherhood had a plan – to recover a weird painting mentioned in lost works by Thomas DeQuincey , which supposedly ate people. This œuvre, by the mad Italian painter Piranesi , had been destroyed in 1814. But a duplicate had been made and was ultimately recovered by Horst Eismann, the collector of the strange.

The Doom Patrol intervened and broke the phenomenon, restoring Paris. But much of the Brotherhood of dada, including Quiz, elected to stay within the Painting. It was a dimension  with various subdimensions following the conventions of various art schools.

The freaks, forever rejected on Earth, had found a world that could accept them and which they could enjoy.

The Quiz always floats slightly above the ground.

The Quiz has a strong phobia about germs and dirtiness. Therefore, she lives permanently inside a hermetically sealed suit with extensive air purification equipment. She often attacks to the cries of “Dirty ! Dirty !” and finishes victims stating “Clean now”. These seem to be the only two phrases she knows in English.

While the Quiz only speaks Japanese, she never had difficulty understanding Mister Nobody. Given Mister Nobody’s strange nature, he may be able to transcend language barriers. As to what others were saying – either Mister Nobody told Quiz about it, or she didn’t care.

The Quiz appears to be quite crafty and competent in combat and in the field. She is a formidable, perhaps unstoppable operative for Mister Nobody.

Drawbacks:
CIA toward Cleanliness, MPI, Misc.: The Quiz does not speak or understand English.

“She only has every super-power we haven’t thought of”

The Quiz’s Omni-Power has rather unique modifiers :

As always, big-P-Powers and small-p-powers are different. The Quiz works with powers, not Powers. ”Plasma blasts” and “death rays” are two distinct powers but probably are the same Power (Energy blast), depending on specifics.

Likewise, a given power may need two or more Powers to be modelled. And some powers, such as the ability to turn people into toilets or to create escape-proof spirit jars, may not correspond to any unmodified Power.

When in doubt, assume that things that can be described under one umbrella term are a power – for instance “telepathic powers”.

But even without “telepathic powers”, the Quiz could invoke “mesmerism” or “psionic  abilities” or “the powers of the human mind as it will exist a million years in the future”. Or any other comic book power that uses many of the same Powers as “telepathic powers”.

A given Character can think about and request the neutralisation of two powers per Phase. That number can be Pushed as if it were an Attribute. Characters with Superspeed can cancel a number of powers equal to their APs in Superspeed. Yelling power names so the Quiz stops having them is an Automatic Action.

By Sébastien Andrivet vaguely based on Mayfair. 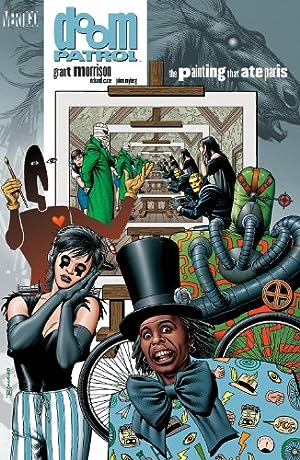