This obscure character only appeared in a few issues of Marvel’s 2017 Black Bolt series, by Saladin Ahmed and Christian Ward.

There isn’t much about her but she’s kinda cool, she’d be handy in a number of space adventures, and she seems straightforward.

Raava is a large, muscular and skilled melee fighter. She looks like she could win high-level caber toss competitions. Do Skrulls toss cabers ?

The unskrulled’s martial speciality is fighting with a pair of large broadswords, with a cutlass-style spiked guard. But she’ll also do fine with a longsword, or even a large piece of sharp, flat metal.

She stated that she was a highly skilled spaceship pilot.

Raava also knew about the physiology of a somewhat obscure humanoid species, about Earth, etc.. She presumably knows about space stuff in general.

She has some sort of direction instinct. Raava always knows where to go to reach her objective. Even in a maze, even if she cannot see anything, even if the environment keeps shifting. This seems to be a super-power.

On the other hand, she never learned to shapeshift. On some panels she seems to be increasing her stature for intimidation purposes, but that barely counts by Skrull standards. And it presumably doesn’t make her stronger.

Still, coming from a shapeshifting people means that Raava is skilled at spotting illusions and disguises.

Raava can arm herself with two energy blades, the Angry Daughter (orange) and the Hungry Son (magenta). Their nature is unrevealed. They might be :

As a third power, Raava seems able to fly – perhaps even in a vacuum. Maybe flight, swords and navigation form a unified theme in her culture. 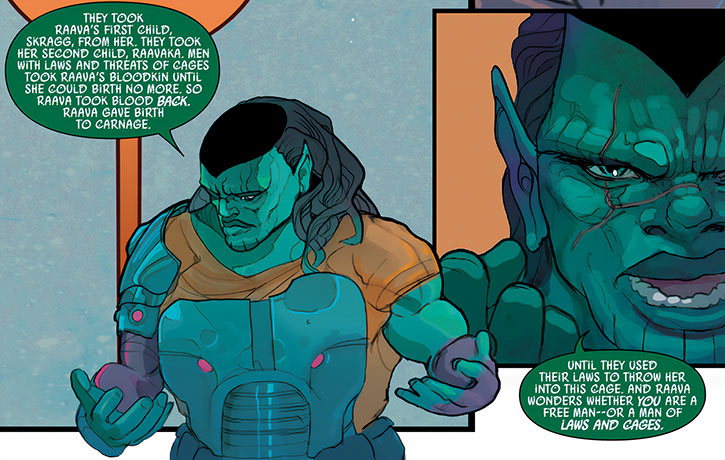 Raava is a Skrull adventuress. As she refuses to comply with any law or acknowledge any authority, she soon ran into severe troubles with the regimented Skrull jurisdictions.

She was branded a pirate, though that may have been baseless. Or heh, maybe she has a cracked copy of Photoshop CS6 😱.

Raava boasted that she had flown ships through the poison storms of Vokkorra-4, and the god-mazes of Yalg. Presumably, she had all sorts of space adventures.

But she was eventually captured. From there she was transferred to a secret Inhuman space prison. Which likely means that her captors really, really wanted to get rid of her.

This may be when she was declared “unskrulled”.

Raava once states that authorities took her first child, then her second child. And that then, “men with laws and threats of cages took Raava’s bloodkin until she could birth no more”.

This led to her striking back. Then, after much violence, to her imprisonment.

Her words are ambiguous :

Within the secret prison, aged inmate the Metal Master (Molyb of Astra) had been plotting. He gradually assembled a gang. Beyond Raava, these included :

Against all odds, they discovered the nature of the prison and its warden.

Once the warden had been destroyed, the elated Raava said her farewells and returned to free space. 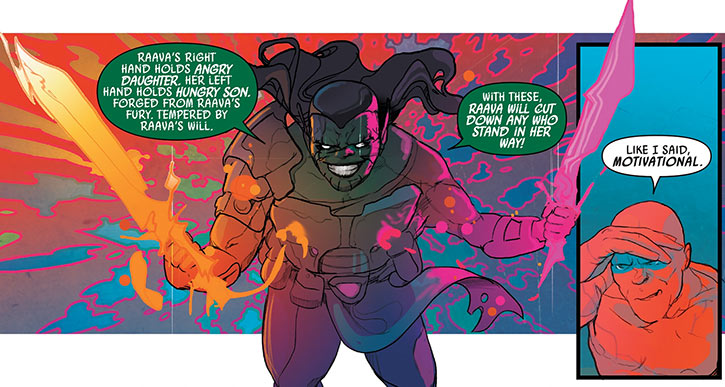 Raava is a sort of Cimmerian barbarian, fiercely forging her own independent destiny and scoffing at “civilisation”.

She’s a rugged survivor, plays by her own (minimal and pragmatic) rules, despises those who follow orders, relishes in violence, etc..

She talks of herself in the third person, with stilted expressions. Presumably, this is because the dialogue takes place in Kree and thus her second language. If so, it’s also possible that she’s speaking in an older form of Kree.

One gets the impression that Raava is violent and ruthless, but not malevolent. She may be more of a hunted rebel figure, whose crimes are committed to survive and thwart the authorities hounding her.

Some of her dialogue gives the vague impression she often works as a smuggler.

Raava dearly loves exploring space. She calls the stars her friends, and longs to travel to new solar systems.

“YES ! Raava is free ! Raava is armed ! Let the men of laws and cages tremble !”

“Raava does not trust your mettle, Earther. But she has few options. And this is the best of them. We would escape this foul place. Are you with us ?”

“Raava’s right hand holds Angry Daughter. Her left hand holds Hungry Son. Forged from Raava’s fury. Tempered by Raava’s will. With these, RAAVA WILL CUT DOWN ANY WHO STAND IN HER WAY !”

She’d be a Khund, and there you go. See the profile for Green Lantern Kho for a bit about khundness. 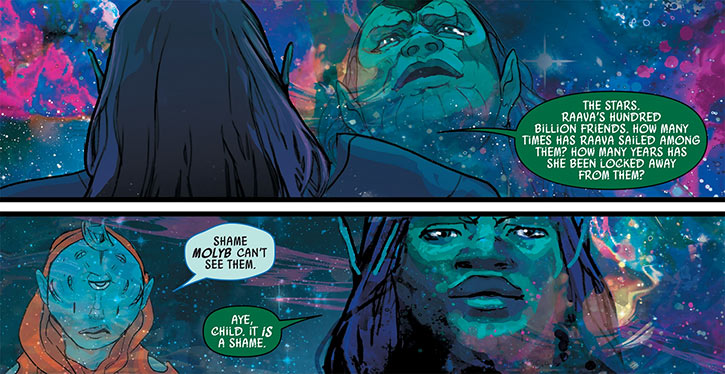 Stats are highly speculative, given the lack of material.

That a good part of the dialogue takes part in Kree is my assumption.

Flight is set high enough that she could fly through space (as she seems to do as she leaves), *if* you use some rules about accelerating in a vacuum.

She may also have Sealed Systems, but we can’t tell from that page. Plus, it might be her chestplate that has a vacuum protection mode.

A recurrent issue with Detect and similar Powers is that APs are both the Range, *and* something for meta-Powers (Neutralize, Drain, Adaptation, Sorcery, Mimic…) to interact with. These usually are orthogonal concerns.

But here it’s just right. Since her direction sense was still up when everybody’s Powers had been bollixed.