If you’re not familiar with these painted comics, you should first check our “base camp” Nocturnals article. It explains the things.

Raccoon is a human/raccoon genetic hybrid. As such he possesses superior strength, senses and ferocity – plus low-light vision. His fangs can tear throats open.

He’s a redoubtable, ruthless criminal operator with nerves of steel. Raccoon shrewdly understand the streets, underworld dynamics, and basic business management. However, his education was limited, and he doesn’t have a large vocabulary.

His cunning is impressive. The Raccoon has an intuitive sense of power dynamics – whom to stick with, whom to betray and when, who’s rising and who’s on thin ice, whether a proposed crime is going to work… He also excels at gauging whether he can take on somebody in a fight.

He’s a gifted combatant. The Raccoon usually fights with the traditional .45 ACP handgun or paired .45s. But he’s no slouch in hand-to-hand.

Raccoon has good contacts with the Freelynchers, a small gang of fellow animal/human hybrids. However, it is unclear whether the Freelynchers still operate together, and how many of them are still in the Pacific City area.

During his plot against Tony Zampa, Racoon was assisted by a synthetic called Lucille. Lucille supposedly was Zampa’s bodyguard and assistant, but she had secretly been working for Raccoon. Though she was referred to as a Torpedo-class synth, Lucille was far smarter and more capable than other Torpedo models in the stories.

The Raccoon was one of the experimental subjects from the Narn-K genetic engineering lab in Pacific City. The team there perfected the art of the chimera, creating many human/animal hybrids. They reached a point where these were healthy, though presumably sterile.

While they were all prisoners, the hybrids were given some education and books. As a kid, the Raccoon thus obsessed about the seminal noir novels – Dashiell Hammett , Raymond Chandler , Mickey Spillane , etc.. He wanted to live in that genre, assuming that the outside world worked just like in those stories.

The bold, resourceful Raccoon was the first hybrid who escaped from the Narn-K lab. But though he dodged every bit of security, he didn’t go that far. When he stumbled upon a road, the Raccoon was hit by a car. Dazzled by the headlights, he had no idea of how to react.

The raccoon was saved by Doc Horror, who had the lab under surveillance.

After treating the hybrid’s wounds, Doc offered to let him join his nascent crew. But the Raccoon declined. He wanted to be the boss, to be feared, to be a killer. He wanted whiskey and slouch hats and femmes fatales.

The Raccoon hit the P-City underworld. Using violence, intimidation and unpredictability, he assembled his own crew. Eventually, he recruited other hybrids. These mostly came from the same lab, as the Raccoon bribed the guards to allow for escapes.

This hybrid gang was known as the Freelynchers. According to the Raccoon, they were exceptionally dangerous. According to Starfish, they weren’t all that – a pack of swaggering toughs without much influence. Their original speciality apparently was hijackings.

This likely was because of the top dogs in the area – the Zampa mob. Even a posse of hybrids could only go so far against them. Especially since Don Lupo Zampa still employed Doc Horror back then.

Mr. Zampa actually liked the Raccoon’s style – and his son Tony Zampa had been a dangerous disappointment. These opinions were shared by most of the Don’s lieutenants. 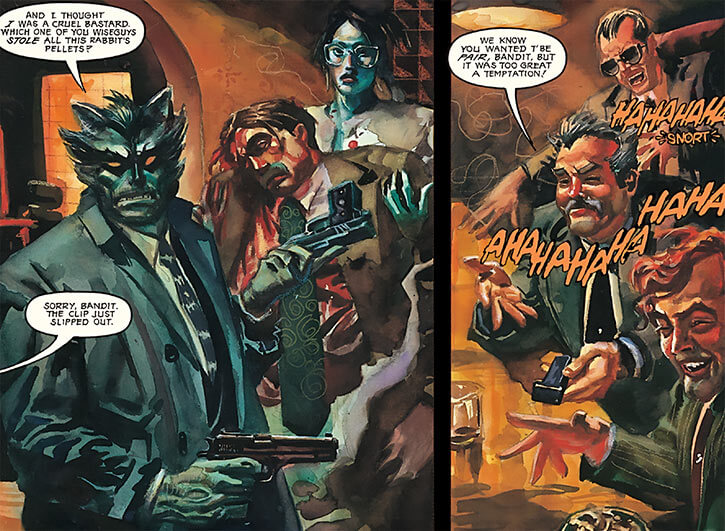 Furthermore, Zampa had a keen interest in the nocturnal world of monsters, witches and chimeras. Especially since having Doc Horror as his retainer made this world tractable, rather than a death sentence.

Thus, the Raccoon’s ties with Zampa grew. He worked for the Don along with Dr. Horror on several occasions. Raccoon patterned himself in part after Doc Horror, wanting to seem as tough and feared as him.

After Doc left, the Raccoon kept on keeping on. Eventually, with the backing of the Don’s lieutenants, he shot Tony Zampa dead.

During this general era he also laundered part of his gains, buying legit businesses in Pacific City. The main ones were his favourite tacos restaurant (“Taco Hell”), a dry cleaner, and later on a small cinema specialising in old movies.

Doc Horror eventually exposed Fane, the Director of Security at Narn-K, as an alien Crim. One of Fane’s Crim hatchlings had been controlling Tony Zampa until Raccoon slew him. Fane also tried to ally with Raccoon and have him replace Don Zampa. But the hybrid intuited that something was wrong and kept his distance.

Despite his wariness, the Crim did get within knifing distance. The Raccoon started dating Lica. Though she seemed to be a Human employee of the Zampa mob, she actually was a Crim infiltrator.

Due to little Evening Horror’s recklessness, the Nocturnals had to fight Fane before they were quite ready.

The Raccoon and his Freelynchers came in in time, mobbing and killing their former jailer Fane. But it had been the Nocturnals who did most of the heavy lifting. And without them, Raccoon would likely have been killed or controlled by Lica.

Furthermore, the Freelynchers lost three of their own, who had been bought by Narn-K to betray the Racoon.

Over the years, the Raccoon consolidated his status as a senior lieutenant and special guy to the Zampas. What became of the Freelynchers is unclear.

He also grew closer to the Nocturnals. It was where the real action was, and they took on menaces that would also harm the Raccoon’s interests.

Another factor was his strong attraction toward Nocturnals member Starfish. Though Starfish wasn’t that interested, the Raccoon stuck around.

During the 2000s and 2010s, with Starfish floating away from the team, the Raccoon increasingly came to replace her in the field.

The opening theme from the movie Usual Suspects comes to mind.

The Raccoon quite resembles the classic Beast (Dr. Henry McCoy) of the X-Men. He has dark blue fur all over, and solid orange eyes. As with many raccoons, there’s a patch of darker fur around the eyes that evokes a bandit’s mask.

He’s usually dressed in 1940s-ish clothes, which seems the norm in the Nocturnal’s world. However, when he’s not running his business, he may simply wear rugged, casual 1990s street clothes with an outdoorsy vibe. This is among the styles of clothes that have changed weirdly little over the last 25+ years.

When going casual, the Raccoon may not wear shoes. His calloused paws make footwear optional. His bushy tail isn’t usually visible, but some of his trousers have an aperture for it.

Evening Horror once commented that the Raccoon smelled surprisingly nice.

During one Halloween, the Raccoon wore an obviously hand-made Black Terror costume. This simple, classic design was also used by DC’s Mister Bones.

Early on, the Racoon was deep into his ruthless, tough, ambitious, masterful, self-centered, brutal criminal persona from an old noir novel. But it can’t be called an act, since he had the skills, nerves and intelligence to walk that walk. There was a “trying too hard” vibe in these early days, but he certainly was deadly and capable.

Early on, Bandit was proud of his ability to betray anyone in two seconds flat if offered a better deal. He saw this as being macho. He eventually came to realise that it’s bloody stupid.

He has some animal instincts, particularly when it comes to feeding (he likes catching crawdads and eating them raw) and fighting.

He also makes semi-frequent references to cleaning things, but that one seems more a bit of flourish for his personal #brand. This is because raccoons famously appear to “wash” their food in some circumstances, though this behaviour isn’t well understood.

As he became “respectable” as a Zampa made man, the Raccoon didn’t want to be nicknamed “Bandit” anymore. However, all Nocturnals continued calling him that, and he soon gave up. 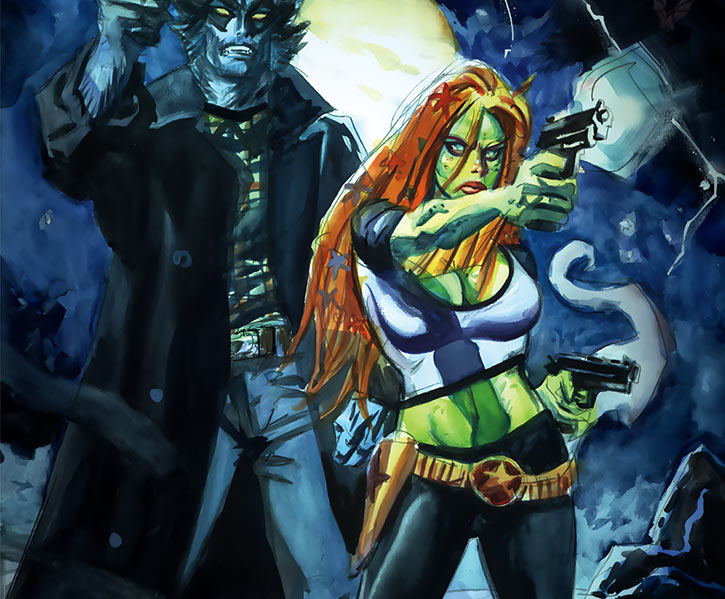 Bandit seems genuinely fond of Starfish, and consistently tried to interest her with displays of smooth manly tough guy charm. This didn’t work that well (in part because it did feel forced), but the moody Starfish gradually accepted him as a friend. She’ll even help him from time to time, but only if she’s got nothing better to do.

The Raccoon also has a somewhat crude, but genuine sense of humour. If he had to fall back or gets defeated, he’s more likely to take it gracefully than go into a frustrated rage. He appreciates wit, and reacts to it in a friendly manner that may surprise those who only see him as a savage murderer.

Bandit sometimes insists that he’s a total ladykiller. But one suspects that it’s simply underworld molls earnin’ a livin’.

“Tony had it comin’. He went behind us on this deal with you. It’s ugly, but it’s our way.”

“Hey, pretty little tree frog. You ever fish the river ? Come out with me sometime. I’ll show you all the best places.”

His scholar is a tad vague, but we don’t have enough material for something more specific.

His hearing powers might have higher APs and/or he might have Directional Hearing APs. And he may have more Thief Subskills. But as usual, we stuck with what’s demonstrated. 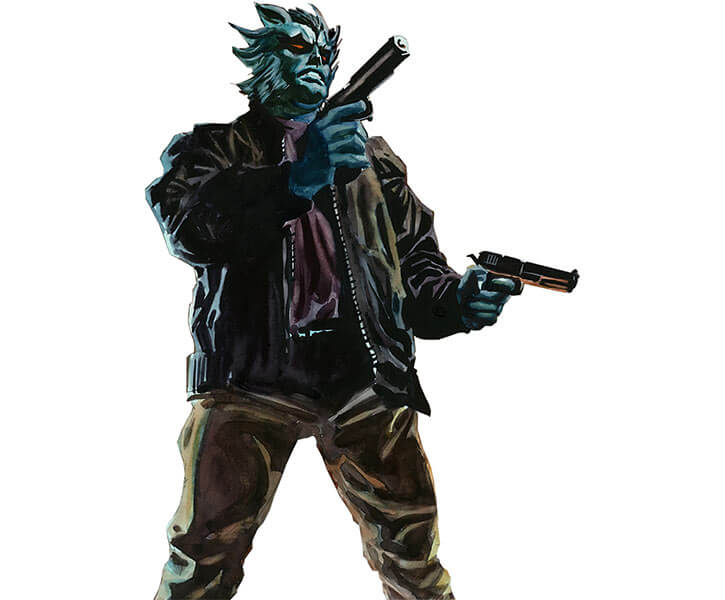 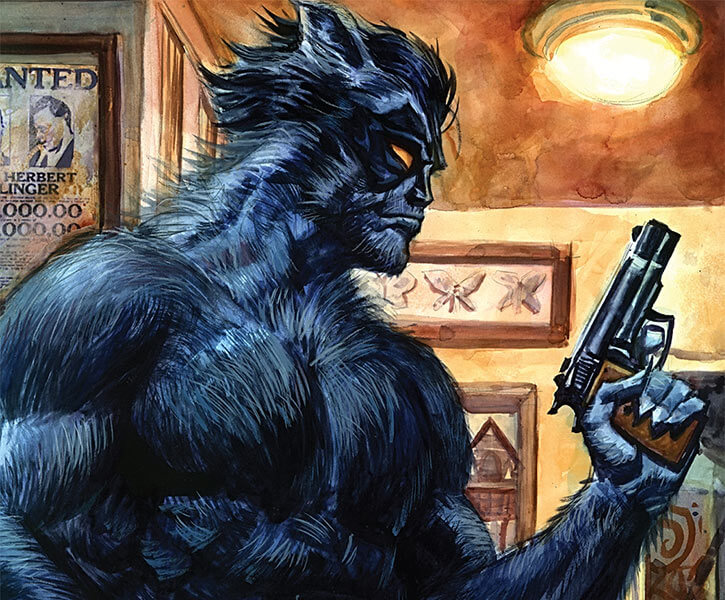