Rag Doll is a Flash villain who appeared in 1942. But this profile is about his son Ragdoll – a modern character who appeared in 2005 during the run-up toward the launch of the Secret Six comic book by DC.

Through a series of surgeries, Ragdoll has had his body altered. He had his biological joints replaced with fully rotating, self-lubricating, artificial ones. This made him more flexible, reproducing his father’s natural abilities.

He can bend, compress and contort himself in extremely unnatural ways. However he requires the use of a special emollient so that his artificial joints don’t tear through his skin.

In combat he usually wraps himself around opponents, and has been shown able of compressing them with enough force to crush battle armour (in DC Heroes RPG terms that’s using Self-Link (Snare) to strangle his victims).

He also wears a pair of knives at the base of his back, which he sometimes uses in heavy combat.

He is also resistant to certain types of damage, surviving long falls of dozens of feet with little apparent damage. He has had his bothersome genitals removed, denying his enemies one vulnerable spot. 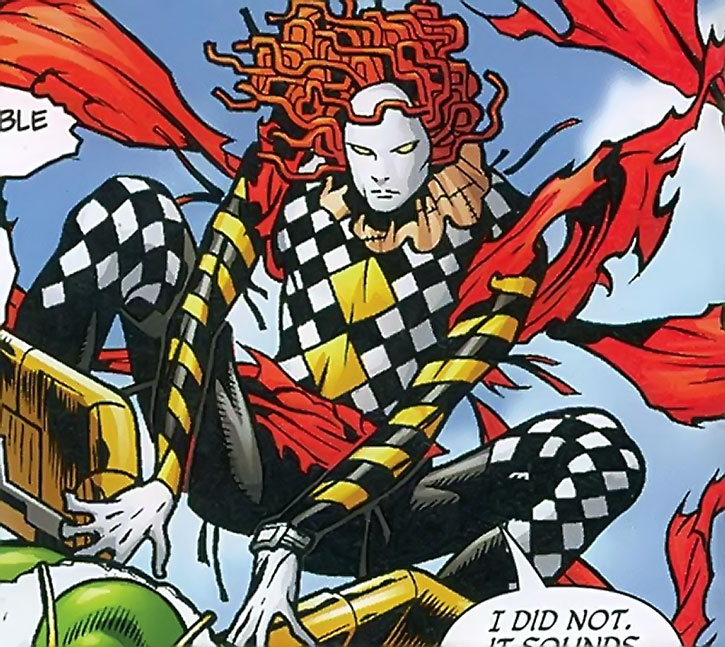 Because of his surgeries, whether from enduring them or due to the changes made, he has a high tolerance to pain. This let him not necessarily react as strongly to it as he might otherwise. Thus, torture will be less effective against him.

Also, his body doesn’t tend to bleed as much, and handles the stress of having hands and fingers reattached with unnatural ease.

(A general history of the Secret Six can be found in the team entry.)

The son of the original Rag Doll, Peter Jr. was a disappointment to his father when he was born a normal baby, without the triple-jointed gift of his father or brother. He was closest to his sister, Alex, but longed for his father’s approval.

Seeking acceptance, Peter underwent numerous surgeries to allow him to emulate his father’s physique. The surgeries left him disfigured, but Peter had little concern, developing an obsession with transforming himself.

He became a mercenary to pay for his operations, and was recruited into the Secret Six. Ragdoll developed an odd relationship with team mate Parademon, who became Peter’s guard dog. Parademon insisted on calling him ’Clown’, claiming Ragdoll was funny. 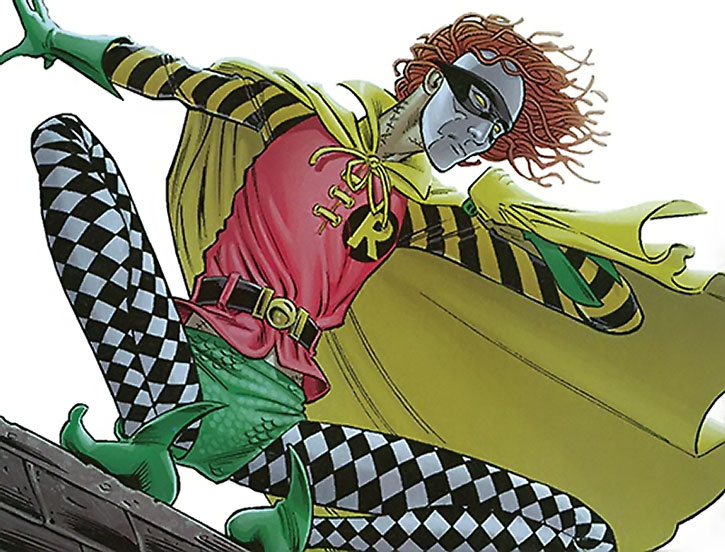 When Cheshire’s betrayal led the hostile Society to their door, Peter briefly clashed with his father. While he survived the fight, Parademon didn’t. Ragdoll had his remains (head and torso) stuffed, and keeps them in his room where he talks to them.

Attacked at a restaurant by Ibac, Ragdoll won the fight by grabbing four high-quality, serrated steak knives, working his hand down Ibac’s throat to his lower oesophageal sphincter, and leaving them there.

Injured, though, he was hospitalised. Visited in hospital by Doctor Psycho, he had a post-hypnotic suggestion implanted, which forced him to attack his team mates during their next mission. They survived, although he did lose a hand in the fracas. 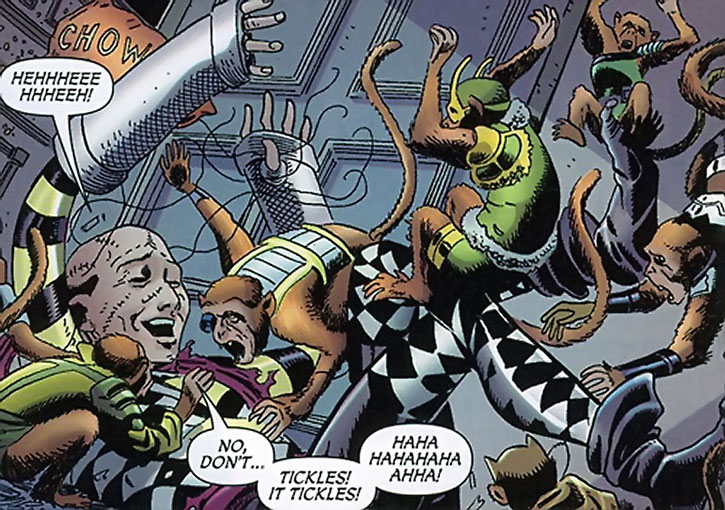 Fortunately his body’s tolerance for surgeries allowed him to quickly recover some use from the reattached limb.

In the aftermath of the battle, Ragdoll spoke with the Mad Hatter, who was happy to have finally found friends. Unfortunately Ragdoll had decided that there was only room enough for one dandy freak on the team, and pushed the Hatter over a large wall, telling the rest of the team the Hatter had decided to leave.

Learning that Alex had mutilated herself and become the monstrous Junior, Peter tried to help her. He also convinced his team mates not to kill her when they could have.

She refused his repeated attempts to aid her, slicing some fingers off him in the final showdown in Gotham, just before she died.

During the escapade Peter was generally bemused by his friend’s ethical quandaries, and didn’t understand why they split into factions.

Teenaged team mate Black Alice has developed a crush on him, at which Peter was slightly flattered. However he’s confused as to how to react to her advances (and she’s apparently unaware of some of the sacrifices he’s made for his art).

Following the mission to Skartaris , Ragdoll began to consider his feelings for Alice, and how she seemed to depend on him. Scared he was going sane, that he would become Peter again, rather than Ragdoll, he became desperate. Ragdoll stole the Card from Scandal, considering using it to get Parademon back. 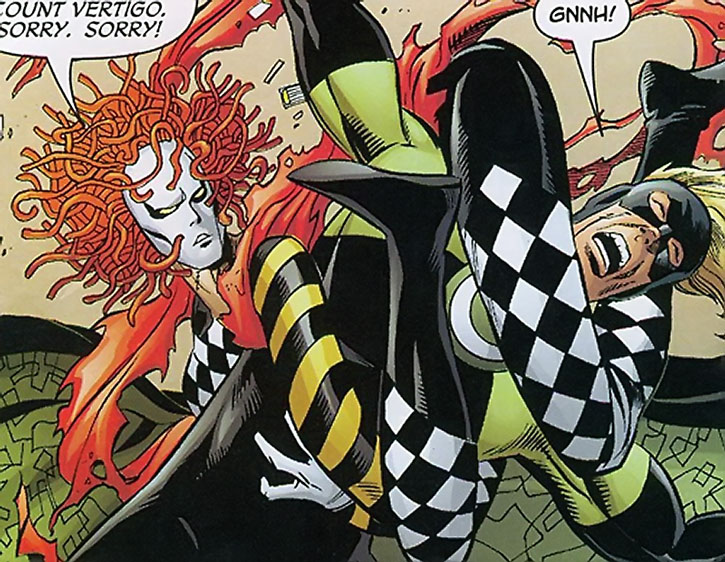 Scandal discovered the theft, and attacked him, seriously wounding Ragdoll. Merkel grabbed the Card and got it to transport him to Hell. He was welcomed by its ruler, Lady Blaze, who revealed that as one of the few people born without a soul he was to be made a prince, and reunited with Parademon.

Opposing the Six when they came after him, since he was unwilling to surrender the Card in case he wanted to escape himself someday, Ragdoll eventually relented and joined his friends. With Parademon happy where he was anyway, Ragdoll gave Scandal the Card back.

Returning to Earth, they found Black Alice had left.

While tall when he stands straight, he rarely does so due to the surgeries he’s undergone. Ragdoll is usually crouching or hunching, and appears to be half a foot smaller.

Oddly nonchalant and always courteous, Peter is dedicated to improving his craft. This is mainly done through additional surgeries to alter his body, to which he seems almost addicted. Despite his politeness, Ragdoll always sounds off in conversation.

He has little compunction against killing when necessary, or just when he feels like it. He seems to have sociopathic tendencies, not understanding what’s going on when his friends have ethical concerns about a mission.

He formed a bond with team mate Parademon. After his death had his remains (torso and head) stuffed, keeping it in his room where he talks to it. He has also adopted a number of small monkeys, whom he dresses up in costumes, and has spent some of the Six’s loot on constructing a monkey house for them.

His relationship with Black Alice is still undefined, and while he enjoys that she likes talking to him, he doesn’t seem to know how to relate to her.

“I’m not dead, Parademon. Neither am I the least bit humourous. And I was going to replace that collarbone anyway.”

“All due respect, Mallah, but you really do have the most appaling personal odor. Like a hippo sty full of rotten fruit. Only gamier and more meaningful.”

(Madman kicks him)
Ragdoll: “I know what you were aiming for. But I’m afraid I had all that bother surgically removed ages ago.”
Deadshot: “You’re one disturbed freak, Ragdoll. But you’re committed to your freakism, I’ll give you that.”
Ragdoll: “Why, thank you, Mr. Lawton.”

“I’m afraid I don’t speak Korean. I feel very rude killing you in my native tongue.”

“I’m buying a monkey house and a variety of little monkey outfits.”

Ragdoll: “My suitcoat. My beautiful tailored jacket. It’s ruined.”
Knockout: “I don’t mean to alarm you, Ragdoll, but I think you have a broken rib protruding through your skin.”
Ragdoll: “Yes, yes, but my jacket, is the point, Knockout. My jacket !”

Deadshot: “I gotta say, hearing you talk to your stuffed buddy there’s about as creepy as french-kissing your sister.”
Ragdoll: “I’ve done that. This is less awkward, socially.”

Ragdoll: “If I’d known we might die, I would have done something filthy enough to shame the heavens as my last act.”
Deadshot: “What have you got left on that list, ’Doll?”
Ragdoll: “Only what my allergies won’t permit, I’m delighted to say.”

Ragdoll: “Our hostage bit me, do you see ? See where she broke the skin ? Then she spat at me. She’s captured my heart fellows. And I have been keeping the perfect dowry in my freezer at home !”
Deadshot: “Dammit, ’Doll ! Don’t tell us these things !”

[Singing in a Robin costume] “Oh, I’m a little sidekick short and lean, I’ll be replaced when I’m eighteen !”

“On my honor, Thomas, I completely sincerely sort of believe you, and your blatantly obvious self-delusion.”

“I know this is my fault, somehow. And rest assured, I will flagellate myself most egregiously.”

“You’re one of those. One of those enemies who think I am only adorable, and not a threat to be measured carefully. A joke, a jester, a jape in ’jammies. Do you know how many of those people are corpses now ?”

Scandal: “Aren’t you cold ? The wind tonight—”
Ragdoll: “I have memories of Hell to keep me warm.”

“I baited my hook with my own underwear. Is it wrong to hope I catch a fish that I can relate to ?”

Drawbacks:
Distinct Appearance, Misc. (Requires an emollient to avoid damage to the skin). 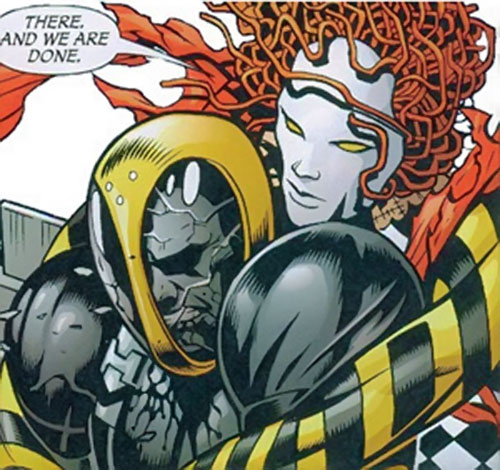 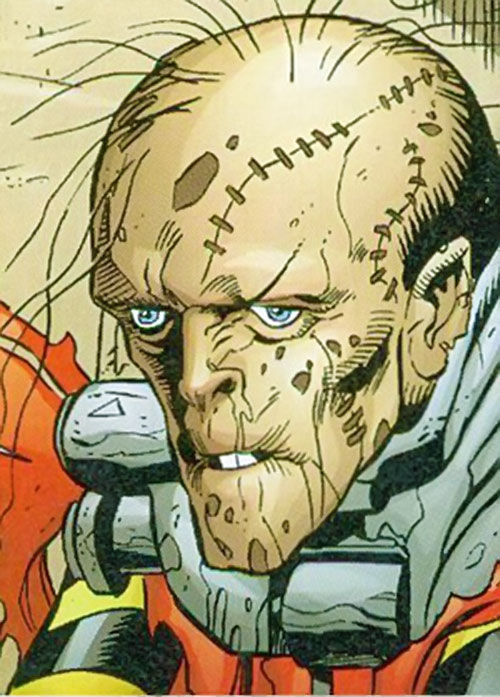 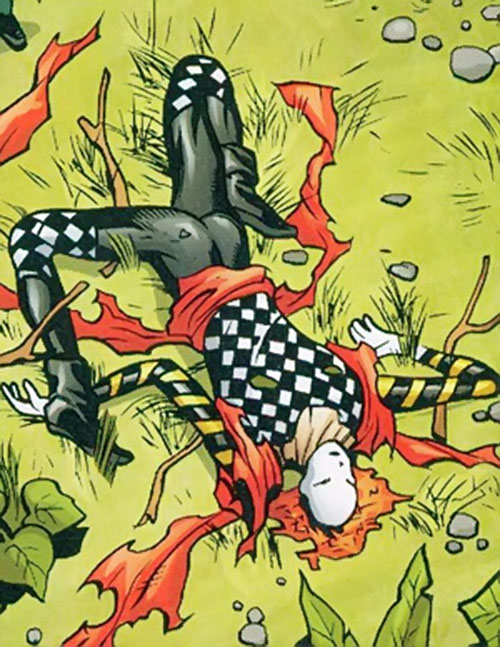 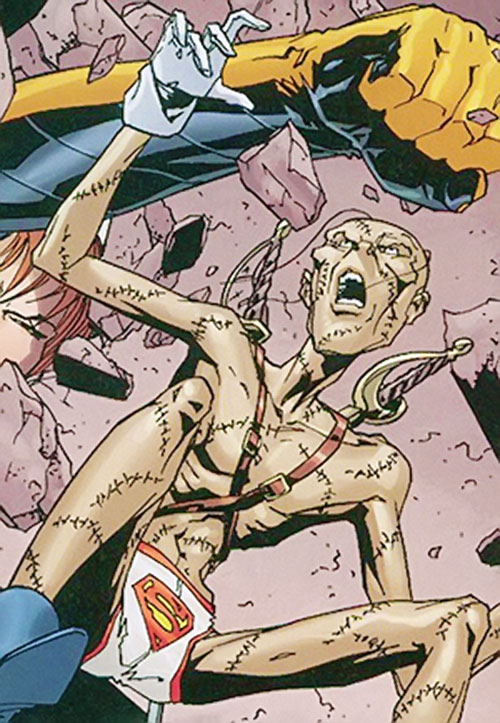