Rage (Elvin Haliday) is a minor Marvel Comics character. He is chiefly associated with the Avengers and the New Warriors, and appeared in 1990.

These are some very old notes, taken early during his career and largely adapted from a Champions RPG writeup. This is one of those “we keep it because it can clearly be useful to somebody, but the goal is to eventually (emphasis on “eventually”) redo it from scratch to much better standards” writeups.

Rage is very big and superhumanly strong and tough. His “rage-powered punches” hit even harder than his nominal strength implies.

Rage was a 13-year-old who, after being chased by some racist street punks, was accidentally buried under toxic wastes. This is how he started mutating into Rage. After his granny explained to him he should not seek blind vengeance, he attempted to become a hero of the ’hood.

He tried to follow up in that by becoming an Avenger. However, being full a youthful resentment, Elvin ended up accusing them of being racist snobs. Despite this friction, Rage performed fairly well during his brief career as a reserve Avenger. However, he was discovered to be a minor, and had to be removed from active duty as a result.

Haliday then fell in with a younger team – the New Warriors. That was during the Folding Circle affair. Rage helped the Warriors by “borrowing” a Quinjet from the Avengers. Rage became a New Warrior, but left with Night Thrasher when the group split.

Haliday later aided Night Thrasher in rescuing Kymaera from the Undertow. He then teamed up with the Thunderbolts, New Warriors, Heroes For Hire, Spider-Man, Darkhawk, the Swordsman and Magdalene in protecting the city from the Elements of Doom.

Rage later was among those Avengers who were captured by Morgan Le Fay and mind-controlled into becoming her personal guard, the Queen’s Vengeance. While under her control he went by the name Blacksmith. He was eventually freed and helped defeat her. 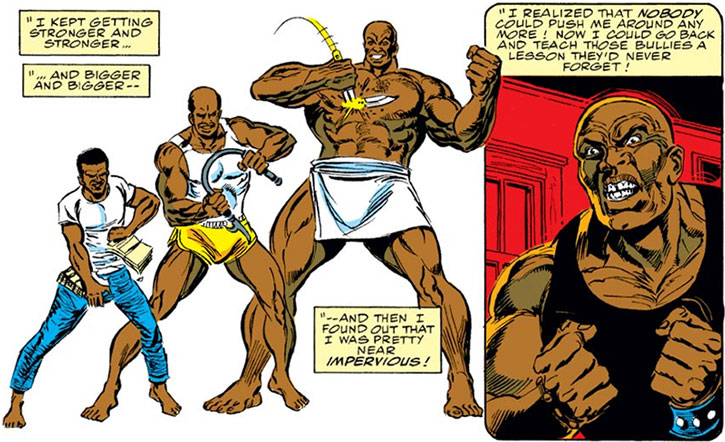 Rage then aided the Avengers in a failed attempt to capture the Whirlwind. From there he returned to the New Warriors. Alongside Speedball, Darkhawk and the Black Cat he unsuccessfully attempted to subdue Wolverine. The Canadian mutant had been possessed by an alien and was then on a rampage.

Elvin eventually gave up his costumed career and enrolled at the Oatridge School for Boys. Despite Speedball’s attempts to get him to rejoin the New Warriors, Elvin declined in order to continue his education.

Rage is 6’6”, 450lbs, Black and bald. Early on he looked as if he was in his mid-30s, but has been looking younger since. His features increasingly matched his actual age, making him look like a hulking teenager.

Rage wears something that looks like a Mad Maxian gridiron football armor. It comes complete with steel mask and spiked shoulder plates, plus chains around his forearms. His prior costume was black leather with a yellow hood, which is what he worn as an Avenger.

Rage is quite intelligent, aware and mature… for a 14-year-old. He thinks he has a cause, fighting for the sake of the ghetto. But it’s not perfectly clear in his mind – especially as to what the exact means of the struggle should be.

One interesting aspect of Rage is his approach to violence. He’s a Sega kid with a Street Fighter/Mortal Kombat understanding of the violence he has to engage into.

“What can I do ? I’ve got super-human strength — I’m virtually indestructible — and I believe in truth, justice and the dignity of man.” 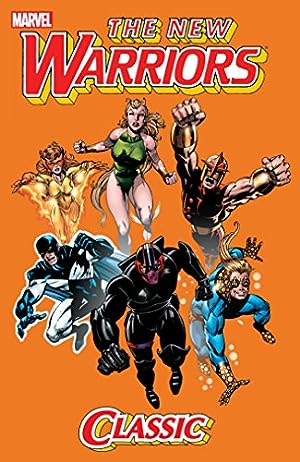 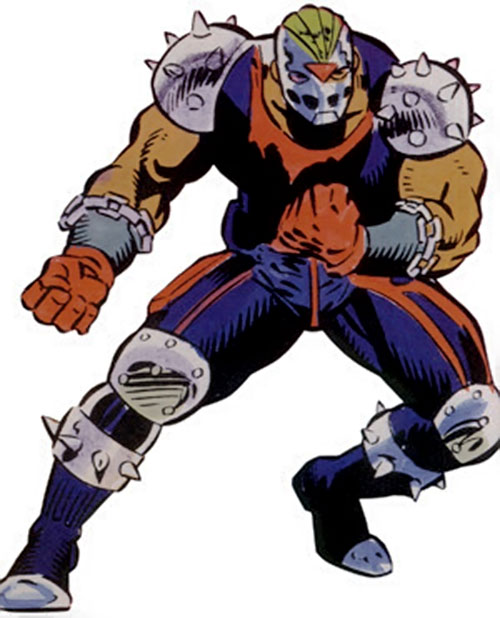 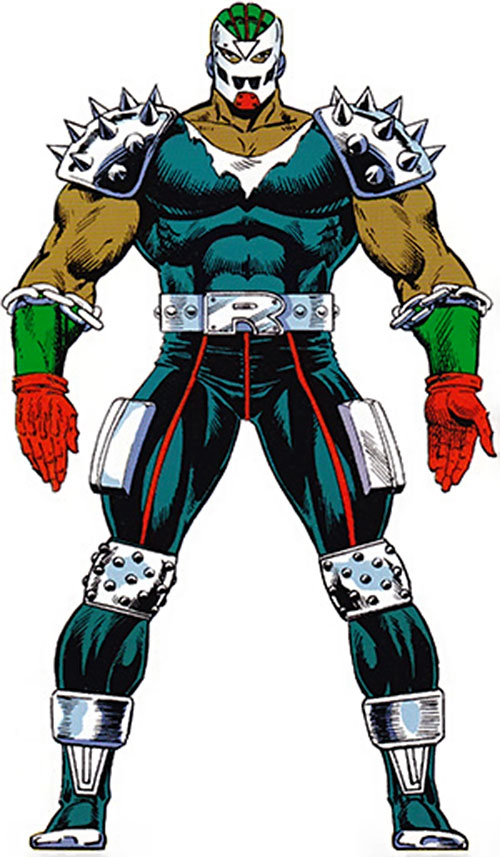 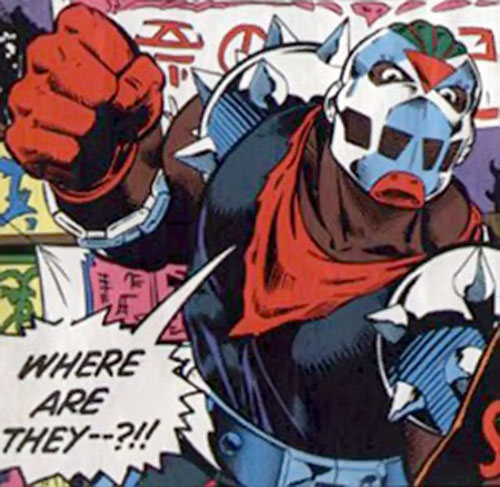