“Hey grump face. Next time there’s a rainbow, look up! You’ll feel better and you might see me too.”

Rainbow Brite was a 13-episode, 1984-1986 cartoon series for very young girls. There also was a movie, the 1985 Rainbow Brite and the Star Stealer. In the chronology of the series, it comes after episode 11.

Rainbow Brite is a young girl who uses a magic belt to protect the colors of Rainbow Land from the evil Murky Dismal.

This article does *not* cover:

“Into a land filled with darkness came a little girl with a mission. After proving herself to be worthy and brave. She became known as Rainbow Brite. Now along with her magnificent horse Starlite and her loyal and true friends Twink and the Color kids. She lives far away in Rainbow land. A wonderful place full of color and happiness using the power of the rainbow her magical color belt and the star sprinkles. Rainbow Brite and her friends protect rainbow lands. Fighting off the forces of darkness and gloom. The devious plots of Murky and Lurky. So, that they can bring color and happiness to people everywhere.”
– Narrator 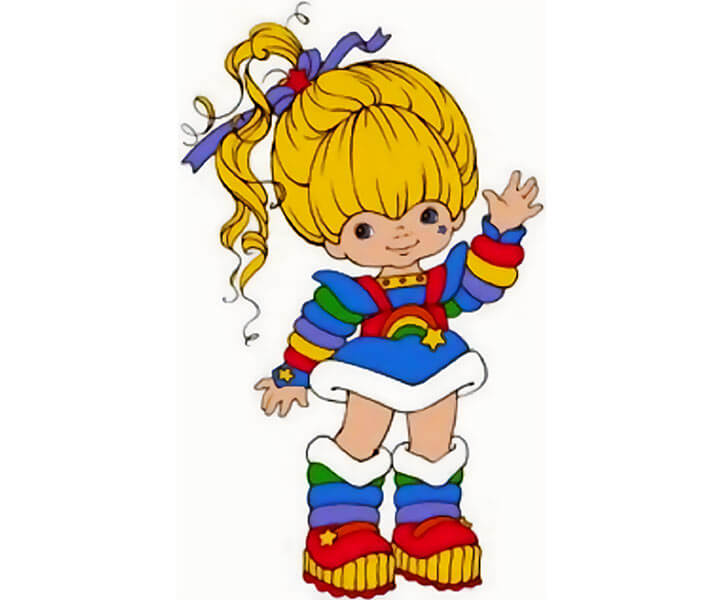 Rainbow Brite, like most residents of Rainbow Land, has the body of a small child. She’s only eight years old, but Rainbow Land is like Never Land. No one grows up.

Rainbow Brite’s strength of mind and leadership ability is well beyond that of an eight-year old. The Color Kids and the Sprites look to her for any important decisions.

Her closest allies are a talking horse named Starlite, and a white Sprite named Twink.

The Color Belt is a powerful artifact. Rainbow Brite uses the Rainbow belt to add color to the world. To create rainbows in the sky and travel between Earth and Rainbow Land.

Color flowing from Rainbow’s belt has a physical quality to it. Targets could feel like it splashed onto them as if it were water. Or it could feel like a wind blowing by. A smack on the cheek when she blows you a kiss, painting lips there. This has a max push of 00 APs (< 50 lbs.)

Over time, she learned to apply much more force. Her Rainbows can destroy barricades, snare enemies, or blast them away. 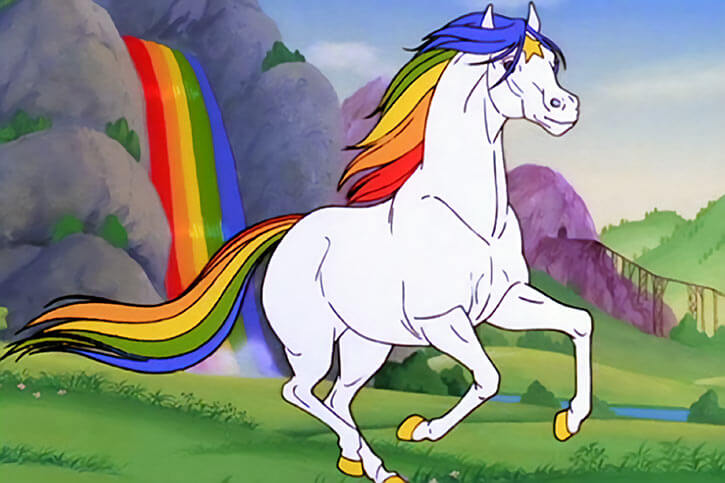 A small child named Wisp came to a desolate and dark land. If she was successful in her mission to release its color and light, the dark land would become Rainbow Land.

Wisp headed for the dark castle where she might find the sphere of light. Dodging man-eating beasts all the way, Wisp befriended a Sprite named Twink.

A talking horse called Starlite also joined her cause. He explained that the King of Shadows had tossed a magic Color Belt into the no-return river.

Once they found the river it washed them down stream. Wisp spotted a strange sight, a baby lying alone on the riverbank! They took the baby into a dry cave. There they discovered the lost Color Belt!

Rainbow Brite and me

The Belt activated and showed Wisp the Color Kids. The King of Shadows had banished these to the seven corners of the land. Only one worthy to wear the Color Belt could set them free.

Wisp with the Color Belt, the baby, Starlite, and Twink traveled to each kid and rescued them. The Color Kids gathered as many star sprinkles as they could. They converged on the King of Shadows’ fortress.

Wisp confronted the King of Shadows and defeated him. He vanished afterwards.

The baby became the sphere of light and the King of Shadow’s fortress crumbled. 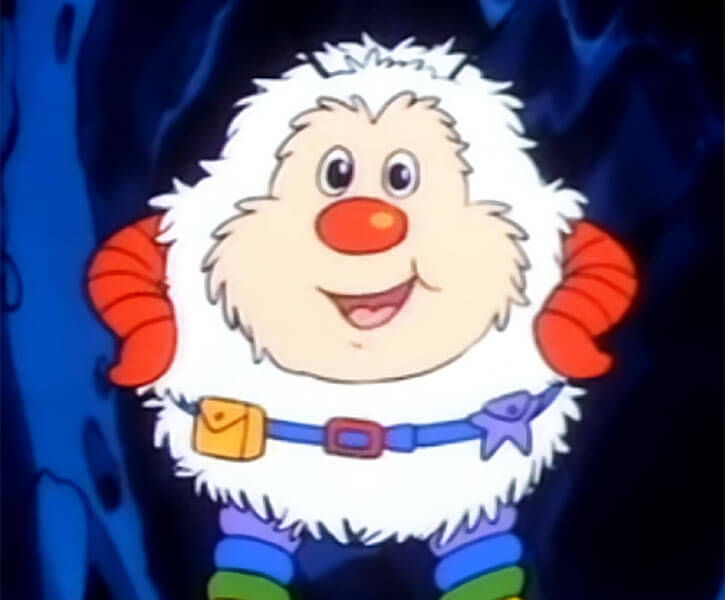 Every morning is a brand-new day

Rainbow Castle stood in place of the King of Shadows’ fortress. The entire land transformed into a bright and colorful land. Rainbow Land!

Rainbow Brite took on the task of coloring Earth and maintaining its beauty. She traveled to Earth with Twink on Starlite’s back. They did their work while staying out of sight.

Until she dropped a rainbow in front of a boy to cheer him up. But he didn’t pay attention and walked right into it. Coloring him like a rainbow! Since she had boosted her Color Belt with star sprinkles, she couldn’t just change him back.

Brian thus became the only human to ever visit Rainbow Land.

In this dark and dismal land lightning strikes continuously. Every animal is carnivorous. The constant cloud cover prevents most plants from growing.

Murkwell “Murky” Dismal, a genius inventor, with his clumsy sidekick Lurky, live in the Pits. Murky built his fortress within the hollow of an enormous tree stump. Murky moved to the Pits after the King of Shadows’ defeat.

Murky desires to remove all color from the world. Everyone will be as gloomy as he is.

His weapons always spew black clouds that control the emotion of those who breathe it. The emotion pushed on them is always gloom.

A joke that’s done over and over with these two is to have Lurky end up falling on top of Murky. 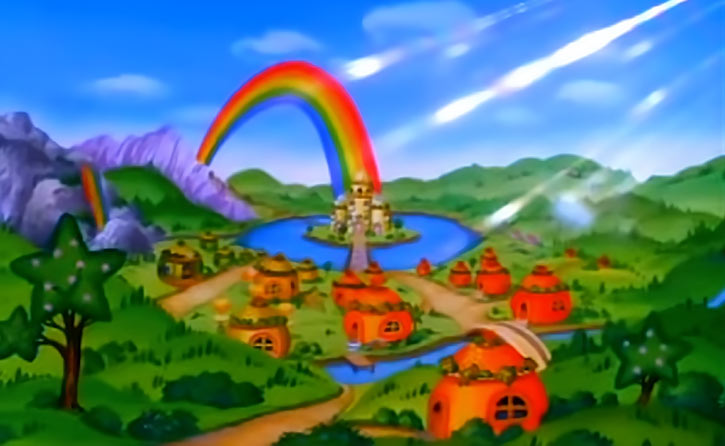 The Color Kids are the seven keepers of the enchanted star sprinkles. One for each color of the rainbow.

The Sprites mine Color crystals from the Color Cave.

Like Peter Pan and the lost boys, the Color Kids, their Sprites, and Murky never grow up.

The Color kids and their sprites:

The Kids have several vehicles and a rowboat.

The Color Kids and their Sprites have a long history with Murky and the King of Shadows. They have clashed for 700 years.

Sprites, like Twink, are small furry humanoids. They may stand on rainbows and star sprinkles. Twink, being one of the few white Sprites, can stand on any color star sprinkle.

The Color Kids may only stand on color generated by their own color star sprinkles. All can stand on rainbows.

At the Color Castle, mined color crystals are crushed, cut into their star-shapes, and heated. This makes them star sprinkles.

There’s a color console used to control colors across the universe. It can be used to send an emergency signal along the rainbow corridor to Earth, sounding an alarm all along it.

The Rainbow River flows from Rainbow Land into the Pits. But when it gets there it turns into terrible raging rapids.

The Rainbow Castle stands in the center of a town full of friendly Sprites.

There are four mystical horses that live in Rainbow Land: 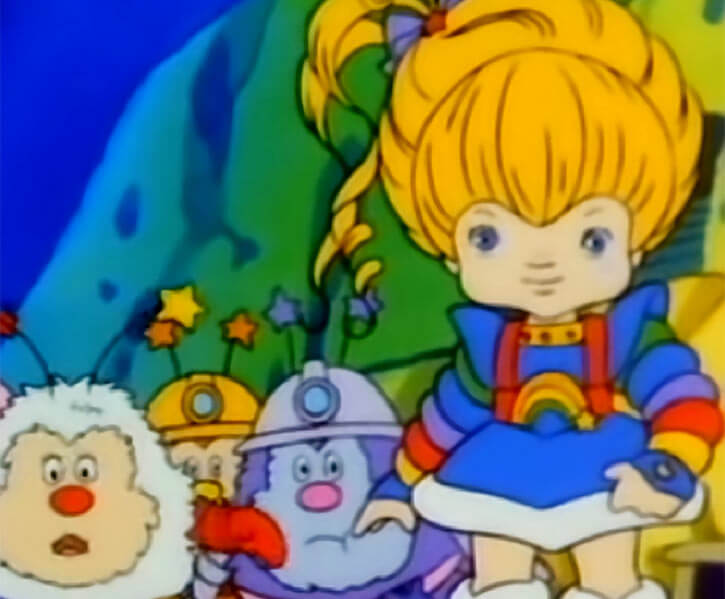 Rainbow Brite has a cherub face with large eyes and big hair. She has a purple beauty mark, a star, stamped under her left eye.

Like the Color Kids, Rainbow Brite has the body of a toddler.

She’s decked out in rainbow colored attire, and around her waist is the Color Belt.

Wisp arrived at Rainbow Land with a mission to save that planet. She is a bright and determined girl.

Strong-willed, happy, optimistic, and incredibly brave. Even after monsters tried to eat her alive. She simply continued her quest without a second thought.

She moves forward when others are too afraid. She never wavers.

“What do I have to do to get that kid (Brian) to look at the rainbow ?”

“We’re from Rainbow land. We put all the color in the world.”

Guiding voice: “You are not little Wisp any longer. You shall be known henceforth as Rainbow Brite. And all the beauty of all the land is entrusted to your care. Protect it well.”

“I have to go spread color on Earth. Bye.”

Patty O’Green: “What are we going to do ?”
Shy Violet: “We must get a hold of Rainbow Brite quick !”

Starlite: “After all, I AM the most magnificent horse in the universe.”

(This section proposes ways of using this character in other fictional universes).

The world of Rainbow Brite would mesh well with My Little Pony, Care Bears, Strawberry Shortcake, and the like. 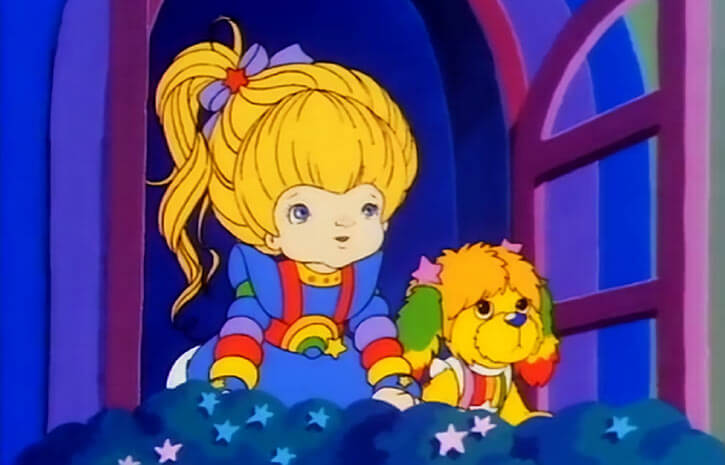 A 267 points Character (without equipment or pets).

Shrinking is always on (-1 FC) and already factored in. 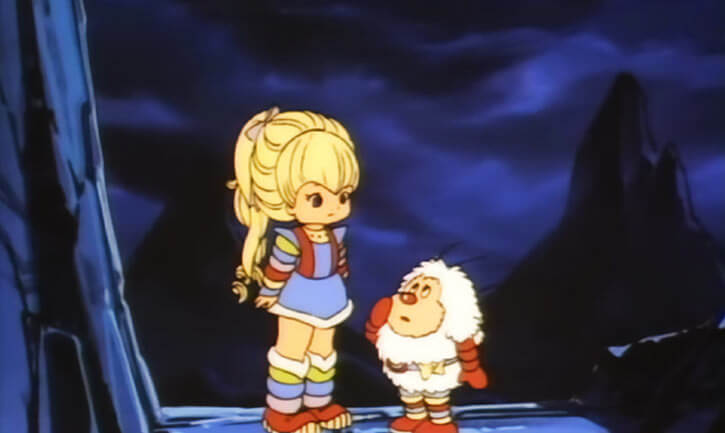 The only white Sprite. Twink befriended Rainbow Brite in her first mission and has been by her side ever since.

A 235 points Character (without equipment).

Twink wears a belt [BODY 02]. On it are two pouches. Twink carries an assortment of Color crystals and Star sprinkles for Rainbow Brite. 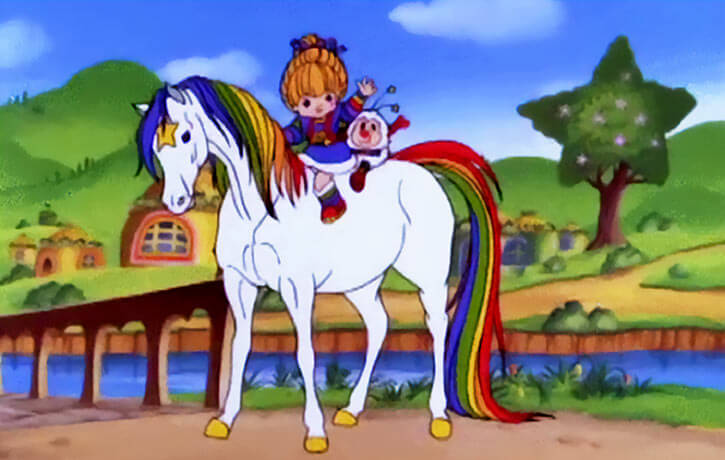 Starlite is a white horse with a rainbow-colored mane and tail. And a big ego. He’s 432 points Character. 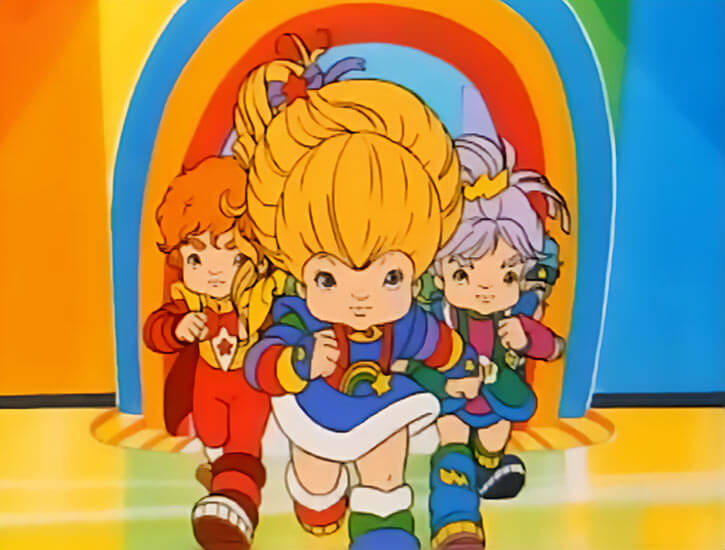 With some Color Kids.

The location of Rainbow Land isn’t known. It exists far away at the end of the rainbow. For this article, I place the magical world of Rainbow Land no farther away than Earth’s own moon (28 APs).

The mystic occupants of Rainbow Land can stand and walk upon rainbows. Traveling on these colorful bows of light is the same as say Iceman riding an “ice slide”. Maximum movement is 08 APs.

The Color power can create rainbows. A rainbow, stripped of its color, will fail and crumble (By defeating the Color power that created it).

Travel to and from Earth isn’t instantaneous. Starlite runs the entire length. It works as a corridor with oxygen (Sealed Systems). Everyone could still talk while in space. Everyone inside the corridor would be traveling very quickly (Flight), even if they are just standing still on the rainbow.

A prerequisite to making this trip would be the ability to stand upon a rainbow.

The Rainbows have STR to hold weight equal to the Color power that created it.

Rainbow Brite sometimes attributes personality to her rainbows. This is her belt’s INT score commanding the rainbow. 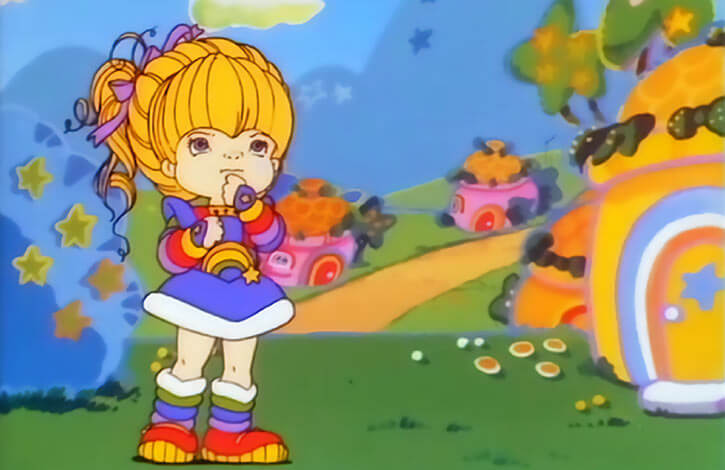 Starlite built a fire by kicking flint to cause sparks.

Both Height and Weight are guesses based on Rainbow Brite interacting with the human boy, Brian.

In early episodes, Twink and Rainbow Brite leaped onto Starlite’s back from a standing start with no effort at all. Later, they vault onto his back using Starlite’s mane.

The Belt will sometimes activate powers on its own. For instance, it activated Omni-Power to use Detect and Remote Sensing to locate the Color kids.

Midway through the series, Rainbow Brite started using star sprinkles every time to boost her belt. Either she had lost confidence in the belts power alone, or more likely, she was testing out her abilities.

Later, she went back to using the belt alone, only boosting when necessary.