It has long been one of the Matrix Corporation ’s desires to have a super-spy under permanent employment with unswerving loyalty to the Corporation. So when the DNAgents Project got under way, they set out to build themselves one.

It was decided that this spy would be female, and she was genetically designed for exotic good looks. Using the, quote, “greater natural psychic potential of the female”, end quote, she was bred for telepathic ability.

For her, there would be no need to plant a listening device or remain within eyesight when following a suspect. By using her mind, she could pick up more about the world around her with her eyes closed than the most observant human being ever could with their eyes wide open. She would be irresistible at interrogation.

By focusing her abilities, she could probe the mind of another person and sort through their thoughts and memories like, quote, “a secretary would sort through a filing cabinet”, end quote. From her, no secret was secure.

A logical extrapolation upon her telepathic ability is her ability to project illusions directly into the minds of others. By rearranging another person’s pattern of sensory stimulation, she can make them see, feel and experience whatever it is that she wants them to. Against her, no one would really be sure what they were up against.

Since Rainbow uses so much of her brain and employs such a great deal of psychic energy in using her abilities, Matrix scientists designed an energy regulator for her to wear, just in case.

Lastly, she was given incredible agility and acrobatics ability. This make her very difficult to catch, also a prerequisite for a good spy. It is for the diversity of her talents and the all-around practicality of them (as well as for her unusual hair color) that she was given the code name Rainbow.

The DNAgents are artificial life forms developed by a shadowy corporation called Matrix Corporation. They have been grown in a vat for five years, and their minds were programmed by Matrix. Yet, they are extremely close to being humans, and have their own free will and personality.

The DNAgents were designed to be a special squad that could take care of Matrix’s dirty work, from espionage to paramilitary action.

At the very end of the series, the DNAgents were captured by Matrix and put back into the vats for future use. Furthermore, Matrix convinced the public that everything to do with the DNAgents had just been a big hoax.

Rainbow is undoubtedly the most mature member of the team. While unafraid of the outside world, she openly questions the practicality of jumping headlong into it. She is the leader of the team and, hence, everyone else’s big sister. This job is sometimes indistinguishable from baby sitting.

Rainbow has developed a strong romantic attachment to Crossfire. She stays in periodic mental contact with him.

Rainbow avoids physical confrontation whenever possible. Her first action in combat is normally to dodge and evade. She relies on her illusionary abilities to frighten off or confuse any attacker. Her main role in a battle is to telepathically take count of the enemy, learn their plan and strategy, and relay that information to the other DNAgents.

She also keeps track of where everyone else is. This prevents one of the other team members from being separated (especially Sham, who may not always be recognizable) and to avoid walking into an ambush.

Also, there was actually an issue of Tales of the Teen Titans where a DNAgents-like group (the RECOMbatants) showed up, only to sacrifice themselves at the end issue. In that month’s issue of DNAgents, a Titans-like group, Youngblood, showed up, dying in a similar manner.

The DNAgents also had a guest appearance in Savage Dragon.

Drawbacks:
Misc : she now has difficulty controlling her powers when separated from Crossfire. Treat this has a Catastrophic Burnout, except that her powers do not shut down, but instead go wild ; Misc : Highly dependent on Matrix, who does not always work in her best interests (10 pts).

Source of Character: DNAgents comics (Rainbow and the DNAgents were created by Mark Evanier). 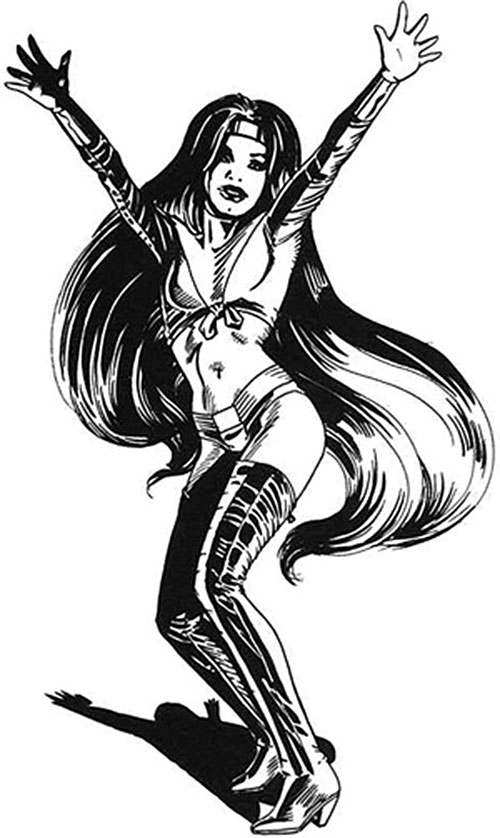