Since SNK seems attached to its old characters, he would eventually return in a major brawling video games series, King of Fighters. Therein he’s fleshed out as a less than serious super soldier of an elite strike force. And he has plenty of interesting teammates to back him up!

Jones’ hand-to-hand skills are primarily the Ikari Warriors style, plus some wrestling techniques. His punches are accompanied by a small explosion. Or a not-so-small explosion in the case of his super-punch, the “galactica phantom”. This blow is reputed for its sheer power.

He’s also a very dangerous soldier. He and his buddy Clark Still have successfully taken on entire armies emerged victorious no less than three times.

He’s proficient with all manor of guns as well as jungle survival. But his weapon of choice is up close and personal with knives.

Jones is said to be an experienced veteran and has earned himself the rank of Colonel. At some point when they were both in their late 20s he and Clark became friends and have fought side by side ever since.

From the dates and events a simple scenario writes itself. It is *absolutely not* official material, but if you need a few *made-up* basics the simplest guesses are:

The Ikari Warriors Mercenary Group to which they belong is an ultra-elite paramilitary organization. But despite being called mercenaries there is no evidence of them fighting for more despite being a very well-funded prominent group.

In fact they behave more like superheroes that have swapped out their spandex for military fatigues.

If anything their group more closely resembles paramilitary black ops group that goes after the worst international criminal organizations. They could easily be a classified branch of Interpol or another international law enforcement organization.

Their mercenary aspect and Ralf and Clark being likely disavowed by the US military could easily be part of a cover to keep them as a sort of deniable asset.

The Warriors are also reminiscent of Dutch Schaefer’s team in Predator. Though of course the primary “inspiration” for the early games were Rambo II and perhaps Commando.

Ralf and Clark summoned to the remote jungle village of Ikari to assist Commander Heidern in putting down a dangerous guerilla rebel force. While the exact country is not name it is most likely Brazil as they would later wound up being based there.

(Commander Heidern was originally named General Kawasaki in his first appearance. The game director Eikichi Kawasaki just couldn’t resist putting himself in the game. He has since been retconned  into being Commander Heidern.)

Their intel proved to be outdated though as the rebel faction had already taken both the village and Heidern. Enroute to their meeting their plane was shot down and after crawling out of the wreckage they elected to shoot their way through an army to reach their objective.

They were able to liberate the village and free Heidern. The Commander in turn thanked them for their service and arranged for a military plane to fly them back to America.

Ikari Warriors 2: The Road to Victory

While flying back to America their plane was hit with a mysterious storm that somehow hurled them thousands of years into the future. When they arrived they were approached by a mysterious creature that explains that the world has been taken over by the mysterious villain Zip Zang.

They succeed in defeating him and were able to return back to their time line.

Ralf and Clark were ordered by Heidern to rescue a young girl who had been kidnapped by the Crime Ghost. The girl was actually the daughter of either the president or a presidential candidate. Sources vary and the official game release doesn’t really make it clear which was correct.

They were able to fight their way through his army of thugs and rescue the girl. So they must have been bad enough dudes, presumably.

Both Ralf and Clark participated in the first three King of Fighters Tournaments on the Ikari Warriors team. They fought along side Commander Heidern in the first two tournaments. In 96, Leona took Heidern’s place the Commander enters semi-retirement.

The team entered the 96 tournament to look into Geese Howard’s involvement. Geese later went back underground without causing too much trouble. So it seemed like a futile mission.

Although they’re said to be one of the higher profile teams their actions didn’t have much effect on the main storyline for the first three tournaments.

It’s worth noting that during this time Ralf and Clark’s nationalities are changed from American to Brazilian. See Clark’s profile for a note about this.

The Ikari Warriors team did well in this tournament and were in the finals. But they had to drop out as during the climax Leona entered the Orochi Riot of the Blood. Unbeknownst to them, the Orochi, an ancient race of demons hell bent on the destruction of the human race, had been manipulating events. That was at first to gauge, and later to wipe out, the strongest fighters. 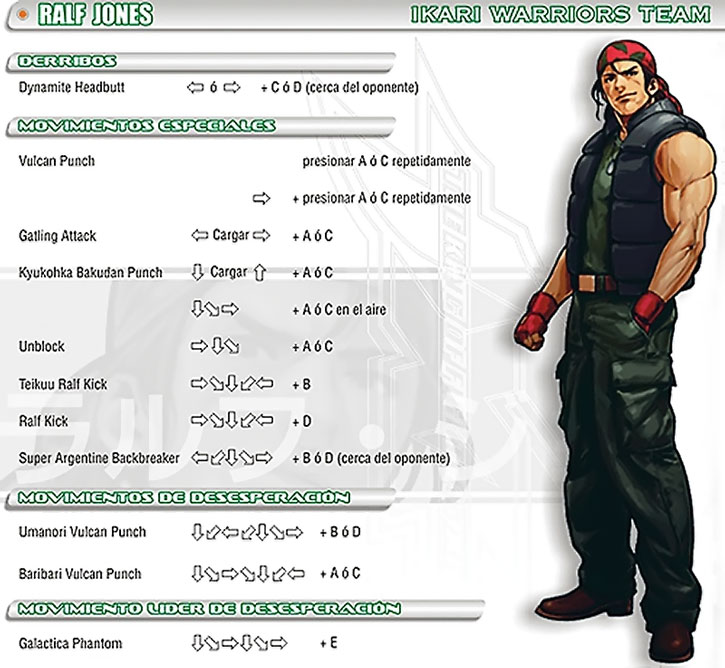 The Orochi made themselves known during the climax. As a result, Leona lost control as she was actually a decedent of their clan. The duo were able to subdue her and helped her come to terms with her dark heritage the following year.

The next tournament changed the rules from three man teams to four man teams. Their fighter was a mysterious new recruit named Whip.

Although she didn’t speak much the team eventually bonded and they grew to consider her a comrade in arms.

Whip eventually went missing during the tournament under mysterious circumstances and the team frantically searched for her.

Whip later resurfaced as part of K’s team along with Maxima and Kula Diamond. The Ikari Warriors had a brief confrontation with them, but K’s team managed to elude them.

Whip was later reinstated and rejoined the team sometime in 2002.

The Ikari Warriors were tasked with locating with locating the Sky Noah, a mysterious ship said to be connected to one of their former nemeses. Due to the Orochi seal being broken again, their mission went awry when Leona once again entered Riot of the Blood. Ralf and Clark once again were forced to subdue her. 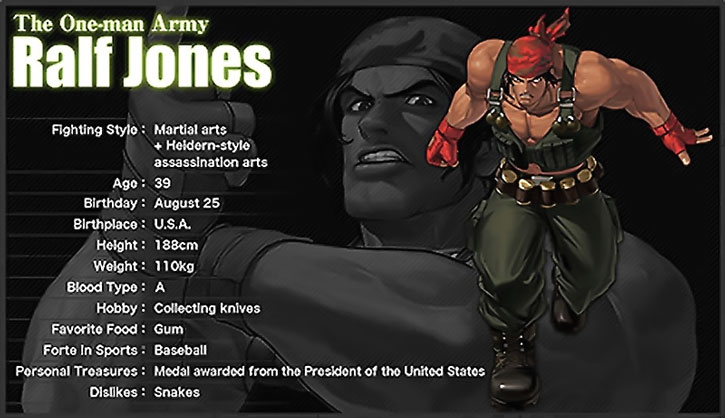 Shortly before this tournament of Ralf and Clark were attending a funeral for their fallen comrade Jim Aldgate. After the funeral Heidern voiced concern of the revival of the Hakkeshu and the breaking of the Orochi seal.

The Ikari Warriors have participated in all of the tournaments after that, but they have not had a major impact on the main storyline. They were able to retrieve the main villain Magaki’s corpse after the dust had settled. However, it was taken from them by two members of Those From the Past before they could send it back to their lab before tests.

Though they likely had a hand in it those plot lines were mostly resolved by other characters.

Ralf has appeared in several Metal Slug games, but these are shooters that involve the heroes fighting off alien invaders and thus in a separate continuity.

Curiously enough he threw exploding knives instead of use a gun. These would just be mini grenades shaped like knives with the dart bonus.

He always dresses in a sort of military style and always wears a colorful bandana to keep his not so military long hair out of his eyes in combat.

Ralf wears a camouflage headscarf, heavy black vest, white shirt (with a bullet belt aligned across it), and jeans from KOF ’96 to ’99.

In KOF ’99, Ralf’s headscarf is plain red, brown pants, a lighter, green military vest (lots of pockets), has no bullets on his shirt, and has two red gloves.

In KOF 2000, Ralf changes his shirt to black, and his dog tag is now exposed.

The Ikari Warriors can be inserted whole cloth. They would likely be tracking Kobra as well cross paths with several other heroes pursuing them.

Equipment:
His equipment in many games *may* be a M16 with a grenade launcher – see our Weapons Locker articles for stats and explanations. On the other hand, based on ammunition capacity and some game box art, it might be a M60 light machinegun.

Armor Ralf appeared briefly in King of Fighters: Maximum Impact: Regulation A, but was taken out later due to the fact that he overpowered the rest of the cast.

If you want the stats for this beefed up Ralf then use the above, but up BODY to 07, and add Growth: 01, Joined: 02, Skin Armor: 02, and Minor Rage and Schtick (pain management {high}). Martial Artist may not be subbed for OV or RV and up MIA (acting impulsively) to SIA.

Basically this version of Ralf could take any attack head on and still suffer damage, but not take any knock or be stunned. So even if he was successfully attacked he could easily take that attack and counter with a lot more force. The only way to actually nail him was with a stronger attack or long string combos.

He also couldn’t be thrown either. The above stats would make it hard to throw him for KOF power level heroes, but certainly not impossible in a super hero campaign. 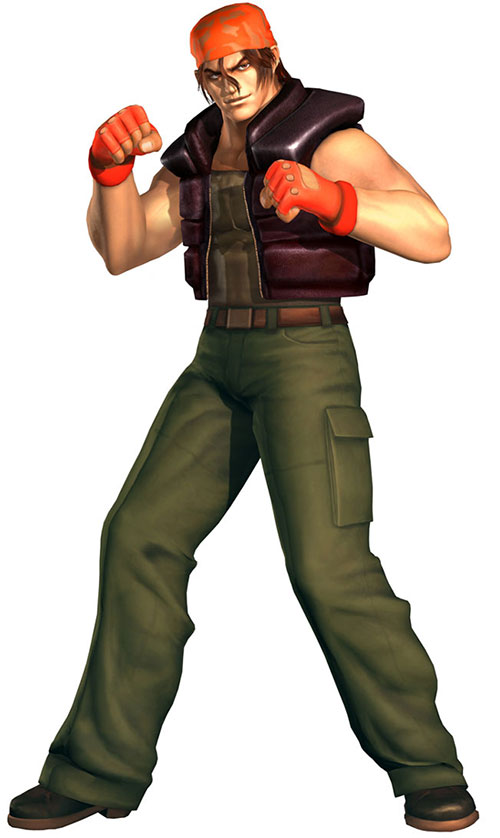 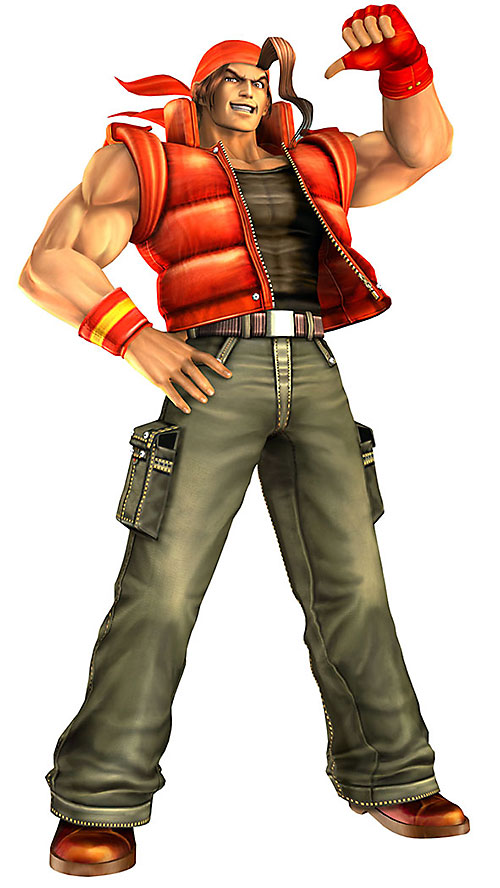