Ram-Man is the lovable buffoon and heroic warrior type. He appeared in the 1983-1984 He-man and the Masters of the Universe animated TV series.

Ram-Man does not appear in She-Ra: Princess of Power.

For more context, we suggest that you first read our primer about the Masters of the Universe world.

Ram-Man uses his spring-loaded leaping ability to aid in his Charge attacks. His legs actually are springs, even making a “Sproing!” sound when he moves about.

His armor protects his head and upper torso. Yet it isn’t heavy enough to hinder Ram-Man from swimming well. He is never seen outside his armor, even when asleep.

Ram-Man is proficient with the many vehicles maintained by Duncan at the Royal Palace.

While Rammy isn’t terribly smart, he certainly is courageous.

Examples of using your head

He-Man took Tri-Klops’ six during an aerial duel on Sky-sleds. But Tri-Klops evaded He-Man’s fire, claiming he could see any shot and avoid it. Yet, Tri-Klops couldn’t see below him. Ram-Man leapt up and destroyed his Sky-sled.

In this instance, Ram-Man leaped so high he needed a parachute after the attack. A parachute isn’t part of his normal gear, but probably should be (“Quest for He-Man” episode).

Ram-Man once outfought the villain Jitsu (“The Dragon Invasion” episode).

Ram-Man once smashed an Indiana Jones-style rolling boulder with his head (episode: “The taking of Grayskull”). 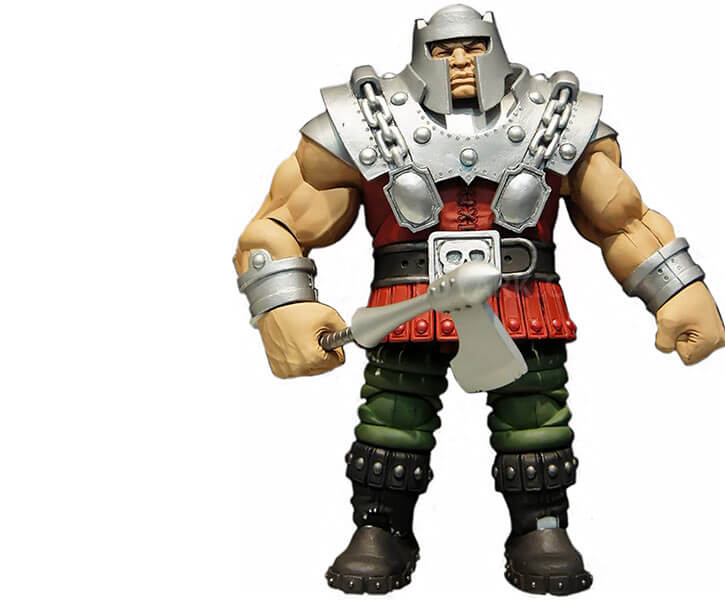 Ram-Man is a heroic warrior with no background to speak of.

In many episodes, Ram-Man is simply along for the ride. Travelling along with the heroes, fighting villains, and making obvious or comical comments.

In early episodes, Ram-Man was often teamed with Stratos.

Skeletor stole many dragon eggs, then used a device to grow them to adulthood in seconds. Beast-Man would then control them and order them to attack.

Soon He-Man, Ram-Man, and their allies had their hands full with dragons attacking all over the land.

With the heroes busy, Skeletor used an artifact called the dragon-pearl to boost his power. He and his evil warriors captured Castle Grayskull. But He-Man guessed Beast-Man was controlling the dragons. Once the villain was out of the way, the dragons became friendly.

Using team-work, the dragons brought down Skeletor’s forcefield. The villains made a stand but were dispersed quickly. Skeletor had to flee.

Loos, a blind kid, gets to go on an adventure with his hero, He-Man. Ram-Man joins them.

He-Man takes Loos into a mountainous region and into a cave with singing crystals. Loos gets to be one of the only kids in Eternia to touch a singing crystal.

However, a crystal falls and bursts with a brilliant light. Both He-Man and Ram-Man are blinded. Being sightless since birth, Loos uses his experience to bring them safe to the Royal Palace. 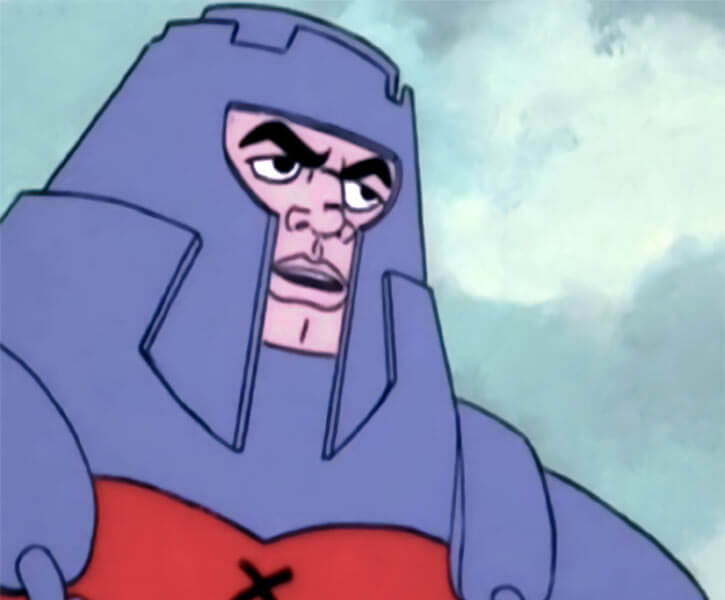 He looks like a D&D dwarf in heavy armor, sans beard.

The massive helm and shoulders of his armor don’t allow for any head movement. It needs to be durable to withstand Ram-Man’s regular attack form.

He has a skull on the buckle of his large belt.

He wears red and black leather under galvanized steel.

He’s an honest man. Ask a direct question and he’ll give you a direct answer.

He is slow of mind, but kind. He has almost a child-like mentality.

He has trouble pronouncing large words like “archeologist”. And doesn’t know their meaning.

Ram-Man is both dependable and loyal. He has a big heart and takes up for his friends. Ram-Man had a disagreement with Man-E-Faces but became one of his best friends (episode: “The Shadow of Skeletor”).

Some have called Ram-Man the most “human” of the heroes.

Surprisingly, he is the only one to wonder aloud why He-Man and Prince Adam are never seen in the same place. 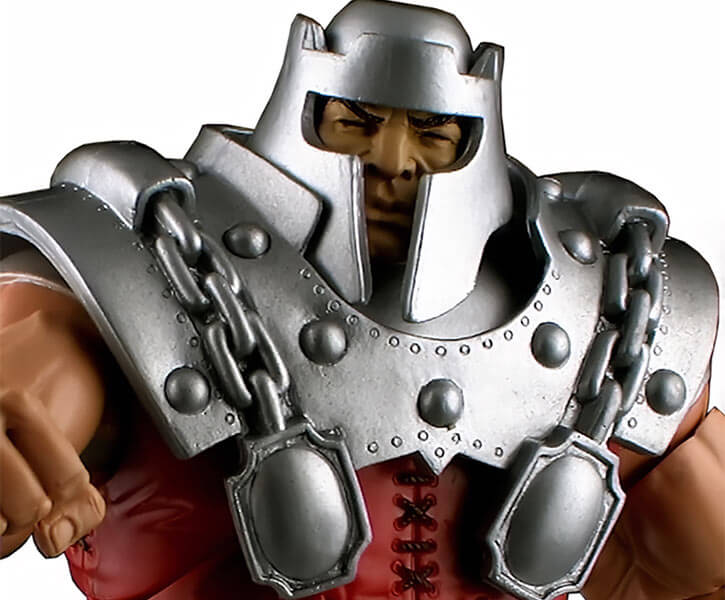 “It’s no trick to be tough, Adam.” (Performs a flying ram attack on a tower) “You just have to use your head.”

“Well, I always like to make a good impression. Haha, get it ? Haha.”

“Ready or not here I come.”

(After two failed attempts at breaking through a blocked stone passageway).
Ram-Man: “I’m more out of practice than I thought.”
Orko: “I can make your job easier.”
Ram-Man: “A mosquito can’t help a hawk.”

Loos (blind, he touches Ram-Man’s armored face): “Gee Ram-Man, where’s your neck ?”
Ram-Man: “Eh, I don’t know. I think it’s under my collar somewhere.”
Loos: “How do you turn your head ?”
Ram-Man: (twisting his body back and forth but unable to move his head):”Uh, well you see what I do…is, uh…I manage.”

“You know some people treat me different because they think I’m stupid but I’m not. I’m not stupid, no, but I am kinda slow.”
Loos: “And a bit clumsy.”
Ram-Man: “No, no, that’s not true either, I’m *very* clumsy.” 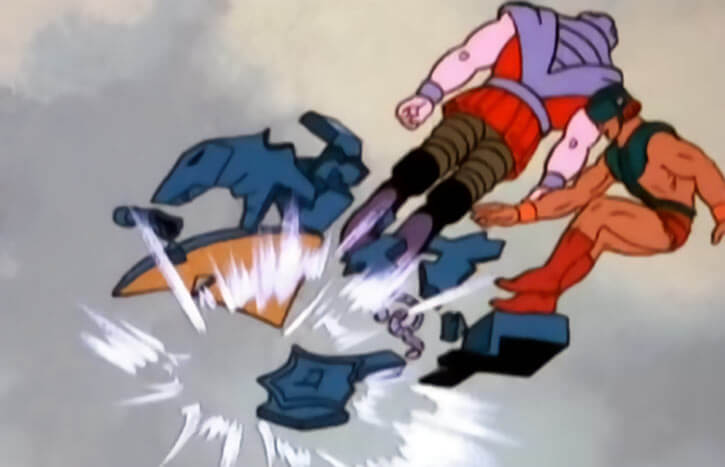 Maybe someone would like to flesh out his history for their game. There are so many questions left unanswered. Why does he have springs for legs? Are they mechanical? Magical? Why does he never leave his armor? 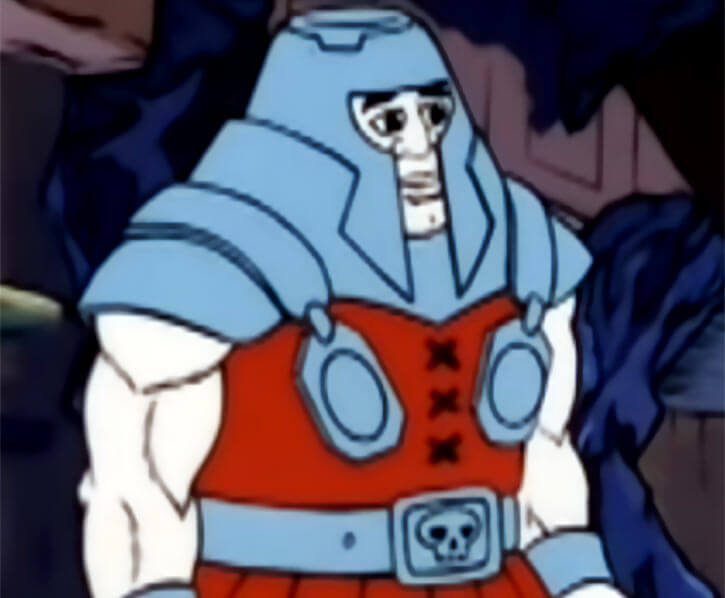 I decided on Minimal Marginal for his Accuracy skill because there are times he certainly shouldn’t have missed. But he did. Like the time he tried to ram Man-E-Faces, who was in rehearsal for a play as a monster (episode – “The Shadow of Skeletor”). A good rule of thumb is he doesn’t use Accuracy against living opponents.

Ram-Man had at least one clue to He-Man and Battle-Cat’s secret. When traveling to another dimension, Ram-Man arrived with Cringer and Orko. He went home with Battle-Cat and Orko… hmmm (“Quest for He-Man”).

Ram-Man leaps great heights. He possibly could reach as high as 13 APs, although that seems a bit much. He has Jumping at this level to match the damage he does with a charging attack.

PSA: A certain moral segment had Ram-Man telling kids not to ram things with their heads. Apparently, this had become a real problem with younger fans of the show (“House of Shokoti Part 1”).

Ram-Man’s action figure came with an axe. Yet he never had one in the Filmation series.

The toy was sold with an all-metal hand-axe. The character doesn’t have one in the cartoon, but if you think Ram-Man should have an axe, give him Weaponry (Melee): 03 and the following Gadget.

Source of Character: The 1983/1984 animated series He-Man and the Masters of the Universe, He-man and She-Ra: A Christmas Special. Voiced by John Erwin.