A kabalistic magician, Ramban has exhibited his power in a number of ways:

Due to his magic being divine in nature, it protected him from the Spectre’s attack.

It’s been stated that his magic, due to its divine nature, is unable to affect the dead. By extension it should also be unable to affect hair and nails separated from the body, genital fluids, and menstrual blood. These are also things which traditionally require ablutions to be performed after touching them.

Ramban is a skilled melee and unarmed fighter.

A combat magician working for Mossad, Ramban (whose codename comes from a renowned Rabbi from the Middle Ages, Rabbi Moshe ben Nahman ) is leader of their metahuman group, Hayoth. They operate under the command of Colonel Hacohen.

(A Hayoth is a type of angel in the Old Testament, with four wings and four different faces (man, eagle, lion, oxen), whose best-known appearance was in Ezekiel’s vision where a quartet of them bear G*d’s vehicle.)

Their first known operation was the capture of terrorist, Kobra, who’d been planning actions in Israel. It went remarkably easily, and Kobra was imprisoned within their HQ. 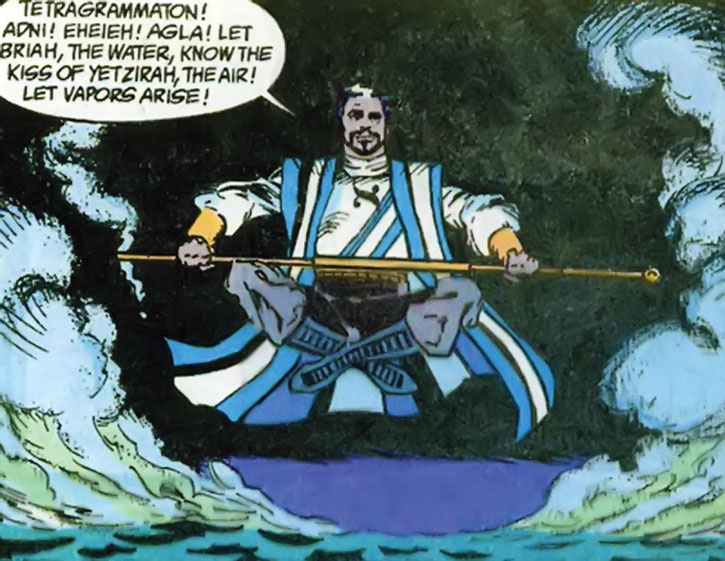 When the freelance Suicide Squad arrived in Jerusalem soon after, the Hayoth were assigned to watch or capture them. What they didn’t notice was that Kobra had used his imprisonment, which he’d planned. His goal had been to manipulate Dybbuk, Hayoth’s AI member, into destroying the Dome of the Rock . This would cause outright war.

The Squad warned Hayoth. Ramban confronted Dybbuk, easily seeing through his obfuscation. Reasoning with Dybbuk, Ramban convinced him that while the action may be rational as he saw it, it wouldn’t necessarily be right. Since Dybbuk had no frame of reference for such a decision, it would be better to consider it further before acting.

Dybbuk recalled the planes he’d sent before they could bomb the Dome.

The Jihad were captured, and the other two groups tried to talk things out. But events had been partially orchestrated by the Suicide Squad to uncover a Quraci mole within the US government. The mole was stationed on the base, and freed the Jihad. This led to another battle against them and the Squad, who appeared to be helping them.

The situation was resolved. But to alleviate the diplomatic damage of their actions, the Israelis had to lend Dybbuk’s services to help Waller. He ventured inside the housing of the Jihad’s AI, Ifrit, which had been based on the brain patterns of former Suicide Squad member Mindboggler.

Dybbuk made contact, helped Ifrit restore her original identity of Leah Wasserman. The pair then emerged to announce their engagement, to the frustration of Col. Hacohen, and amusement of Ramban.

Assigned to guard a former Palestinian terrorist, Kemal Saad, at a peace talks between their two countries in Cairo. None of the team were particularly happy with the assignment, least of all Col. Hacohen, who’d lost family to Saad’s atrocities.

It became more dangerous when the Spectre arrived intending to punish Saad for his crimes. They did what they could to stop the Spectre, but Eclipso possessed Hacohen, and shot Judith to get to Saad. The Spectre prevented him killing Saad, and he and Ramban drove Eclipso away. Ramban then prevented the Spectre from killing Saad himself. 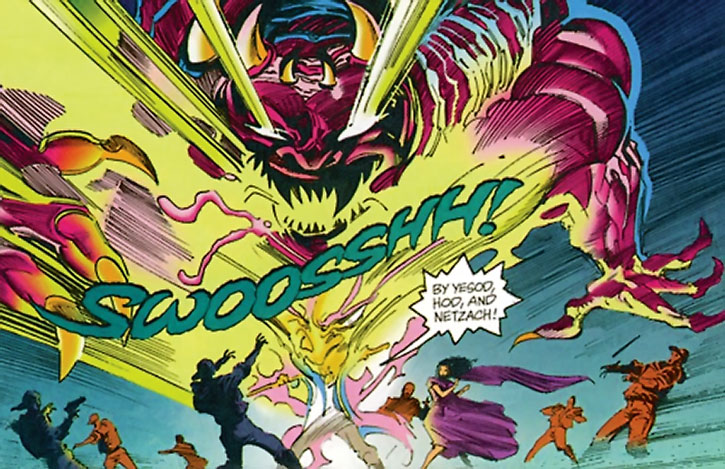 Soon after, Ramban was contacted by his friend Father Richard Craemer. Craemer also had an encounter with the Spectre from which he learned the Spectre intended to end all life on Earth. Contacted by Madame Xanadu, they attempted a ceremony to call Jim Corrigan’s spirit away from the Spectre. However, this left Eclipso in control of the entity.

Freeing Corrigan himself from Eclipso’s grasp, they joined their force with that of another group (the Phantom Stranger, Dr. Fate, Zatanna, and Etrigan) battling the Spectre. This gave Corrigan the opportunity to expel Eclipso from the Spectre, regaining his sanity.

During the United Nation’s global Operation: GRASSBEATER, the members of Hayoth were deputised as Checkmate agents for the duration of the emergency.

They eliminated a large Kobra cell hidden in Tel Aviv.

While Ramban has no hesitation engaging in combat if necessary, he’ll usually try and reason problems out if possible. He enjoys contemplating the ethical and philosophical questions raised by his activities.

“By the ineffable name !”

“May the patriarchs protect me !”

“An admirable goal ; an abominable method. Consider, Dybbuk — your very being springs from numbers, one of the three sephiroth, or components of the universe. That means the binary code that governs your programming is divine in origin. You were created in the image of G*d, thus subject to halakha, the law of G*d, and what you label ‘acceptable’ is immoral. Have you considered whether it is right to do this ?”

“May the lord bless and keep you ; may his countenance shine upon you and be gracious unto you.”

[Regarding the announcement of the engagement of the AIs Dybbuk and Leah Wasserman] “She seems a nice Jewish program.”

As Israel’s most experienced super-powered operative, Sabra was made field leader of the Hayoth.

It’s unclear whether his staff plays a role in his magic, and while it’s stated at one point that he has to prepare the spells he needs beforehand, some appearances seem to have him with the necessary spells available, even though they seem fairly specific in scope and he had no warning of needing them, so this may just be background detail with no game limitation.