John J. Rambo is probably the best, most efficient green beret ever. It was generally accepted he was one of the three finest soldiers ever produced by the US armed forces.

Rambo, John J. was born in 1947 7/6 in Arizona, USA of Indian-German parents. He joined the US Army in 1964 8/6. Entering the Special Commando as a Light Weapons specialist, he received medical training and training in helicopter piloting and languages.

Rambo was one of the great legends of the Việt Nam war, rating 59 confirmed kills and having received two silver stars, four bronze stars, four purple hearts and a medal of honour for accomplished military services. However, this hardened soldier found it almost impossible to fit back in the civilian world, and sound became a miserable drifter.

With deep psychological wounds, unable to hold a job, unwilling to have normal social relations and haunted by the war, Rambo was a typical burnt out vet. During the late 1970s and early 1980s, he was just another somewhat insane prole going from one unqualified job to another.

At one point, his drifting led him to a small American town, where a temperamental sheriff started to harass him. The not-too-stable vet snapped when the police’s attitude toward him reminded him too much of the war. He was soon violently defending himself against his outclassed tormentors – the situation couldn’t be defused before several were wounded and one killed.

The Army, however, now knew where to find one of their once-finest commandos. Hoping to help him come to terms with his ghosts and to unlock a desperate situation, colonel Sam Trautman sent him back to Việt Nam to conduct a one-man combat rescue operation to free some POWs.

The mission was a success, and John Rambo could put himself together a bit. After coming back stateside, he exiled himself again to a Buddhist monastery, looking for inner peace.

Trautman, his friend and mentor, came to him for help in conducting a highly sensitive operation in Afghanistan, but Rambo’s vows made him refuse. Trautman attempted to conduct the op by himself but failed and was captured. Rambo accepted to be infiltrated into Afghanistan, but his main goal was to get the colonel back out alive.

Short, very muscular body, covered with many scars, some recent, some not so recent. Rambo is generally clad in ex-con or miserable vet clothing. When on a military op he prefers combat fatigues, combat boots and a red headband, going bare-chested.

He generally has a low-profile attitude, keeping his eyes to the ground and being quite expressionless. In combat, he has a strange grin, half his face having damaged muscles which do not move well.

Haunted, tired, bitter vet and drifter. He now seeks peace within himself (engaging in Buddhist prayer, meditation and general religious life), but occasionally, knowing full well what skills he has, works as a mercenary and prizefighter to earn a living.

Although having troubles in his civilian life (at least prior to the monastery), and unable to find peace, he handles combat stress and torture extremely well. On a mission, he seems unbreakable. However, even though it doesn’t immediately show, he takes punishment from his war exploits. After the action has died down suffers from serious trouble finding rest and peace.

He’s very professional in performing his work and doesn’t bear a grudge against single individuals who were part of a society that he has fought before. For example, having fought the Vietnamese on multiple occasions, he fell in love with his Vietnamese guide and collaborator.

John, being somewhat clinically paranoid, distrust authority and basically anyone else. The one exception his former mentor, boss and only friend Colonel Trautman. John would go to, and does, to any length, to save the life of Trautman, if need be.

In combat he shows no mercy at all, never hesitates and is nearly superhumanly aware and efficient.

Trailer for the second movie. In 480p, therefore you can see it on this page without missing much.

Although he’s an interesting character, John Rambo has unfortunately become a cliché, and the subtleties of his background are often lost. Thus, he’s a bit hard to introduce. However, you could still have the vet-snaps-against-authority (or crime) situation. The hero(es) arrive, attempt to apprehend the perp, and are badly hurt by the commando.

When they start understanding that he’s the god of guerilla warfare, that he snapped for a reason, and that the situation is much more complex than the routine mad sniper case they thought it was, you might as well have them discover the super-commando-from-Hell’s exact name from his files…

Teasle: “Are you telling me that 200 of our men against your boy is a no-win situation for us ?”
Trautman: “You send that many, don’t forget one thing.”
Teasle: “What ?!”
Trautman: “A good supply of body bags !”

Rambo: (over radio) “Are you listening ?”
Russian Commander: “Who are you ?”
Rambo: “Your worst nightmare.”

(Trautman and Rambo are face to face with a Russian attack helicopter, over a dozen tanks and personnel carriers, and over a hundred soldiers)
Trautman: “You got any ideas ?”
Rambo (thinks for a moment): “Surrounding them is out.”
Trautman: “Hell of a time for humor, John.”

Source of Character: Rambo movies – not the First Blood novel. 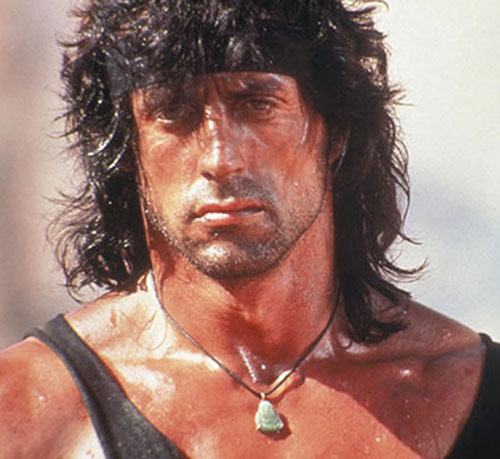 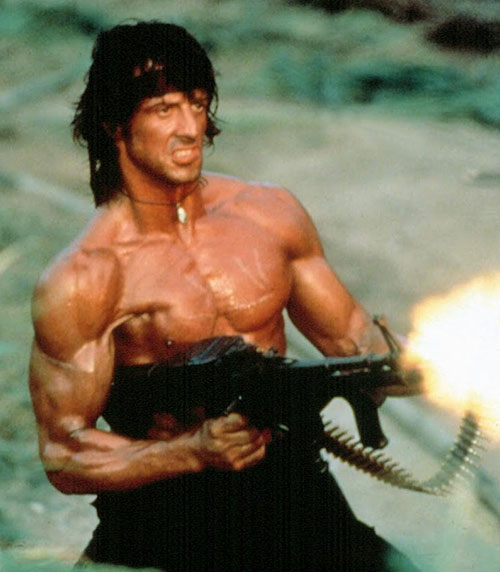 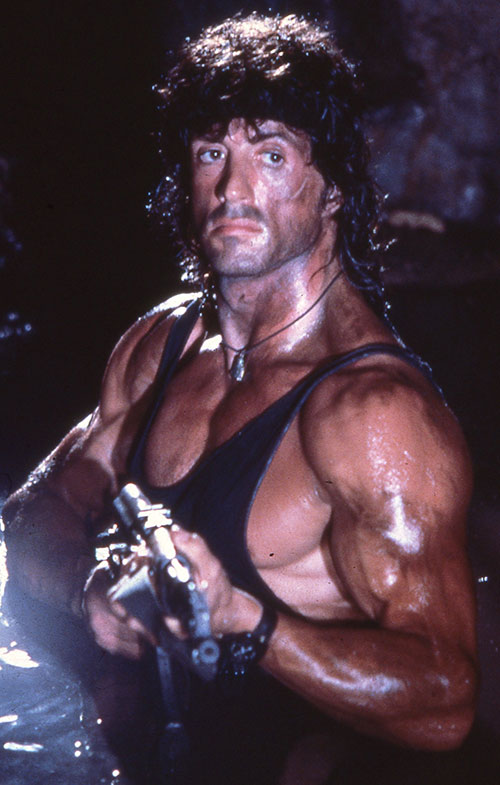