Ramon Bracuda appeared during most of the Showcase ’93 run. Which as you can surmise took place in 1993.

Unsurprisingly, he was never seen again.

Ramon Bracuda is a hardened, homicidal criminal. He has enough juice to command about 40 men in his criminal operations, and a lot of cash at hand. He’s familiar with numerous markets, from dope to car chop-shops and diamond smuggling.

His excellent lawyers have a talent for keeping Bracuda’s hands clean. It’s tough to get him convicted.

Bracuda sports chiselled teeth. These may be artificial or the result of some low-key metagene  expression. These make him even more intimidating (in DC Heroes RPG terms, that’s Distinct Appearance). Furthermore, they are fully capable of ripping a man’s throat out (Claws).

He is a superior, highly trained hand-to-hand fighter. Bracuda is able to threaten even such world-class fighters as Catwoman, and could overcome a young Robin (Tim Drake).

Robin thought for a time that he was some sort of low-powered metahuman given this robustness. Even Nightwing was taken aback by his resilience.

In 1980, Ramon Bracuda was part among the emigrants who left the island when Fidel Castro opened the Mariel port . Presumably, the police heat on Cuba had forced Bracuda to leave, or he was a prisoner who was exiled by the authorities.

US media at that time frequently portrayed the Mariel immigrants as sinful, coloured hordes of barbaric criminals. Bracuda just happens to match this description – no doubt through sheer coincidence.

Over the following 13 years, Bracuda built a series of lucrative operations in Miami, Gotham and perhaps other cities. As part of his Gotham business, he decided to buy out an entire block on Storrow street — in the Brideshead area — to facilitate operations and security. This specific block had a large, open central area, convenient yet invisible from the streets.

Bracuda’s thugs forced the locals to sell their shops and apartments at cut-throat rates. Then they enabled a zero tolerance for crime policy on their new turf. The prostitutes on the block were ousted, and the pushers were shot in drive-bys. The police was also paid off to ignore the block. Bracuda’s thugs ran the shops as fronts.

However, one of Catwoman’s horde of pet cats died after eating cocaine-poisoned food in a dumpster near the Storrow St. block. Arizona, a young friend of the Feline Fatale, investigated. The girl was badly beaten as she got too close to Storrow Street’s secret.

Coincidentally, one of Catwoman’s fences had hired her to take the fall for a theft committed by Bracuda’s men. Between this betrayal and Arizona’s ordeal, Catwoman wasn’t in a good mood.

She stole back a valuable painting while Storrow Street was invaded by Commissioner Gordon and his men. This left Bracuda little choice but to let her go. Robin (Tim Drake) tried to stop the two criminals, but the ex-Cuban took him out with but one kick. But Robin remain determined to get Bracuda.

Robin did intercept Bracuda, and barely won the brutal fight that ensued. But that was for naught – there was no crime that could be pinned Bracuda. Robin worked on accumulating evidence, manipulating Bracuda into mistakes. This was feasible since the crimelord was furious, his hair having accidentally been burned off during the fight.

Robin arranged for Bracuda to attempt a hit on him, then took him down. This time the police had enough proof to arrest him. But Robin’s actions constituted entrapment, and the charges didn’t stick.

He associated with a dangerous killer from Keystone City named Chulo, but both were stopped by Nightwing and Robin.

Bracuda spends most of his time in a luxurious penthouse, wearing but a bathrobe and a loincloth.

If he has to fight he will dramatically take off his bathrobe to reveal his tats and big muscles. His dragon tattoo covers his chest, his back and his thighs.

The loincloth and tats are reminiscent of Yakuza culture, so there might be something here. Or maybe he’s just a fan of Yakuza movies.

A beastly, homicidal, super-macho crimelord. He will make various macho remarks, kill henchmen who failed in their endeavours with his bare hands and teeth, surround himself with molls and tacky but expensive luxury, those kinds of things.

Bracuda seems to spend most of his time smoking cigars and enjoying the attention of escort girls.

(To Catwoman) “If you were not almost a man, I’d enjoy loving you”

(Catching Robin’s bo stick) “Your patterns are too predictable.”

In combat he prefers to sub his high Martial Artist Skill for RV and keep his hero points for LDD. This makes him exceptionally durable.

Bracuda’s HP total assumes that Robin had about 030 HPs during their first clash. 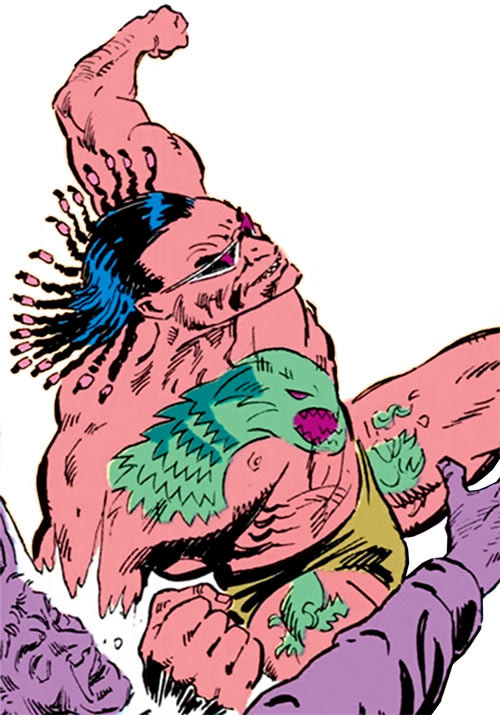 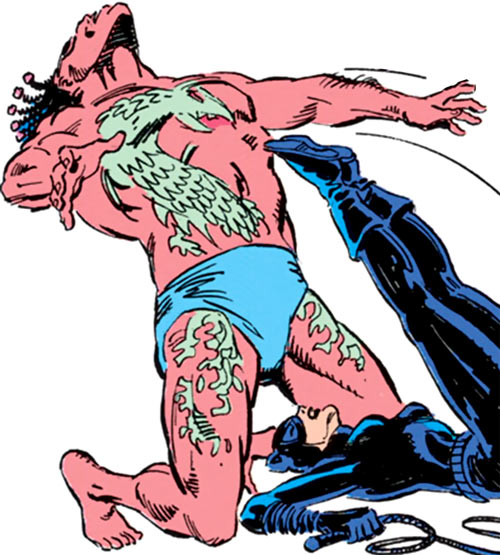 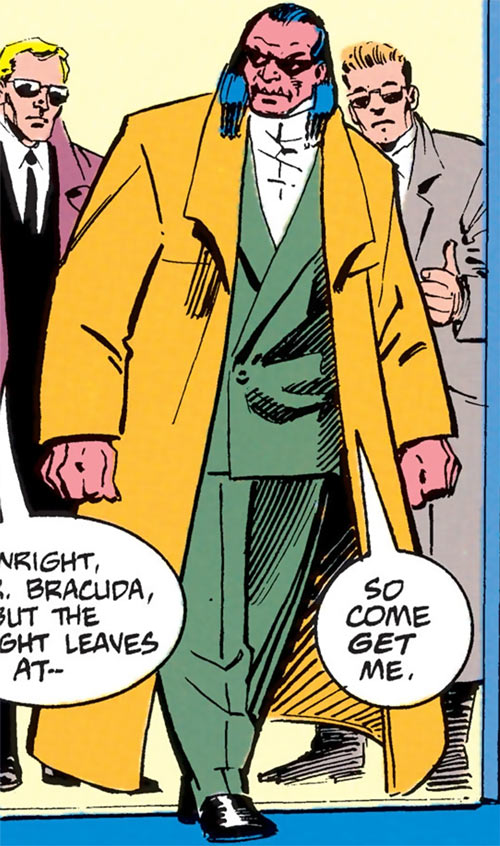