Rancor is an agile and fearsome combatant. Furthermore, she can extend her nails into deadly claws, and regenerate damage at an enhanced rate.

When raging, she automatically exerts a low level force which can increase the aggression level of those around her. It’s uncertain whether she’s aware of this ability.

She also carries around one of Logan’s claws, which she uses as a melee and missile weapon.

Just prior the Martian invasion in the 20th Century, the mutants left Earth to avoid persecution. This exodus eventually led them to a habitable planet they named Haven.

The last surviving member of the original mutants was the long-lived Logan, who was looked to for leadership. He refused, but his descendants had no such reservations. Thus, they have remained in leadership roles, even after his departure.

Over time, their bestial nature has turned them into tyrants. The latest in the line is Rancor, who ascended by killing her father on her 16th birthday.

Game over, man. Game over.

Over time the number of mutants dwindled. More and more of the births resulted in baseline humans, and the mutants became an elite ruling over the humans with an iron hand.

Then came the Guardians of the Galaxy. They had just located Haven, while searching for the long-lost mutants.

Rancor and her lieutenants were suspicious of the newcomers but met with a few of them. When they discovered that other Guardians were meeting with the underground resistance, Rancor attacked them. She also ordered the mutants to put down the revolting humans.

They battled the Guardians, losing two of their number, Rhodney and Blaster, and having to face the threat of a new Phoenix host being empowered. Realising there was little chance of victory, Rancor detonated bombs to destroy the planet, determined that if she couldn’t rule Haven, no one could. She led the mutants to safety.

Meanwhile the Guardians helped the humans escape to safety on Main Frame’s world. 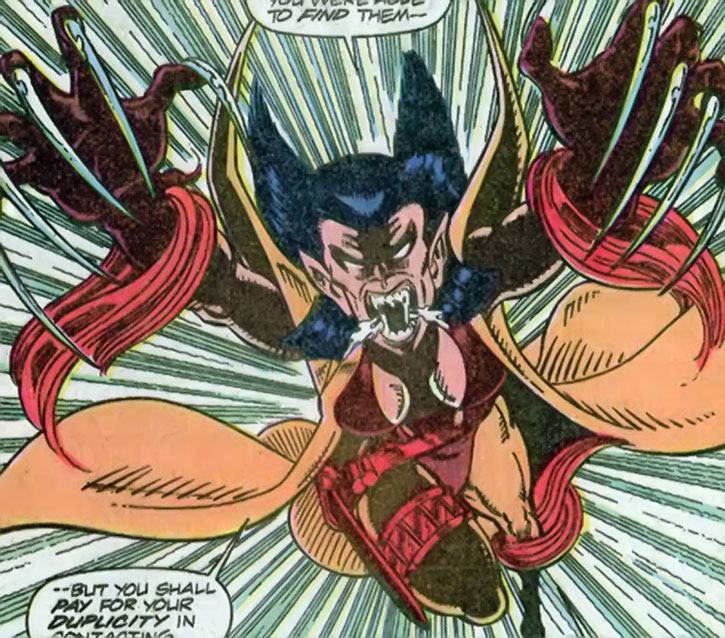 The search led them then to Earth, where they again came into conflict with the Guardians. Rancor battled the new Guardian, Talon, but they were kidnapped by Doctor Doom. He forced their obedience, causing violent resentment in Rancor, who took some time to realize she couldn’t easily kill him.

They worked for him for a while, again coming into conflict with the Guardians. Meanwhile Rancor manoeuvred into a position where she felt Doom trusted her. Using surprise, she stabbed him in the eye with the part of Logan’s claw she had. While it initially appeared that she’d succeeded, Doom soon rose, revealing that his body had long gone.

His brain was now kept in a cyborg body which included the Adamantium  skeleton he’d taken from Logan, encasing Victor von Doom’s brain. They fought, with Doom’s near-invulnerable body giving him the advantages. But Rancor, the better fighter of the two, uses her remnant of Logan’s claw into Dooms vulnerable eye, giving her the opportunity to electrocute him.

Wrongly believing herself victorious, she allows Doom the opportunity to stab her in the back. Doom is prevented from killing her by the Guardian Yellowjacket, who targeted his vulnerable eye socket. This forces the Latverian to flee. Rancor escapes Guardian custody, stealing their med-shuttle, and frees her Lieutenants.

Learning that the Inhumans had recently been abandoned by their dictator, Loki, they took advantage of it by enslaving them. The mutants loaded the Inhumans onto a spaceship they forced them to build, setting off in search of a new homeworld. They found one, naming it Haven II, where they set the Inhumans to work building for them.

Feeling she wanted a child, Rancor arranged to have the Guardians kidnapped. While the other mutants faced off against individual Guardians, Rancor had Talon restrained, where she forced him to impregnate her. Freeing himself, Talon teleported the Guardians away.

Perpetually angry, Rancor insists on dominating everyone around her. She accepts no challenge to her authority, and relies on brute force solutions to problems rather than employing subtlety. She takes whatever she wants, going through whoever gets in her way.

While she can hold her temper in check if she really needs to, such as when she pretended to serve Dr. Doom, she can only do so if she knows she’ll get her revenge on them. And even then it can be a challenge for her to keep it in check.

The only person she has so far shown any softness towards is her son, Talogan. However he’s still just an infant, so this could change.

“Human scum ! I am Rancor ! Rightful heir to the throne of Haven… fifth descendant of the mutant Logan ! I shall not be denied !”

“I will rip your heart out for that, even as I did my father’s !”

The planet which became known as Haven was originally a prison planet for super-villains from Earth, where these unwanted were abandoned to their own devices. A number of the more powerful escaped, but the others were left, and when events on Earth caused the influx of new ’immigrants’, they were completely isolated.

Bonuses and Limitations:
Broadcast Empath is limited to anger (-1), and is only active when Rancor is in a Rage (-1). 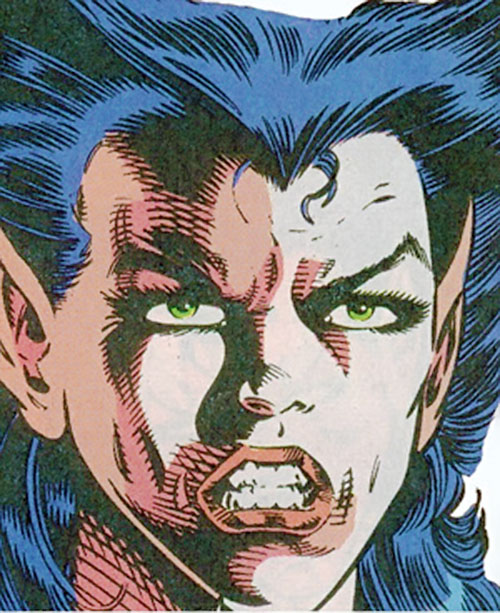