This was the final version of early 2010s experiments in having a DC Heroes RPG random character generation system. It was fun.

Writeups.org has ten examples of characters generated using this method, done as tests.

Roll 1d10 for each Attribute.

At this point we’ll have something along the lines of a “normal human”.

Make the character “special”. The player has one of three options:

Roll to determined the character’s Mold.

The character has no super-power per se. But they have Powers that can be explained as borderline abilities of human beings. Good memory, being huge, running fast, etc..

Roll 1d10/3 to see how many (10 = +1 and reroll). Then follow the general system for “Metahuman” molds taking into account, to see how many APs, the limits of what is “human” in that Power.

The player can choose, instead of a “Superability” to get a +1 to an attribute or skill, proven it doesn’t surpass human limits (GM discretion).

(I’d assume that all fractional results in this system are to be rounded down — Ed.).

Reroll and apply to a gadget/artifact. For this roll, 90-00 is treated as “Mystic”.

If a power AP rating coincides with its Link Attribute value, there’s a 50% the power is linked. 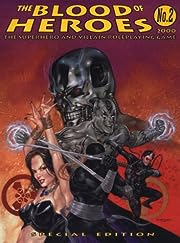 Look at the final index of powers on DCH3rd Edition. Ok, do you see the three columns? Right.

Then on each column, roll 1d100/2, and start counting the powers there, skipping what your GM considers “too powerful” (Sorcery, Omni-Power…), as well as “Mystic Link” and “Self Link”. You can access those by rolling a 100 when selecting powers.

I used another rule: after rolling the column and the d100/2 for the power, I rolled another dice just to see if I started to count upsides or downsides the column (so there weren’t powers that couldn’t appear).

A character has a 20% to have each Skill. If they have a given Skill, they have a 50% to know each Subskill.

If you do not roll any Subskill for a possessed Skill, start rolling again until you get one.

There’s a 75% any given character has at least one Advantage. If they do roll 1d100/4 and count down the DCH 3rd Ed backlist of advantages.

To choose objects of Scholar, Hatred, Attraction, Vulnerability, Connection, etc. I use the following system. Randomly skip through the rules book and pick the first word that catches my eye.

Starting Hero Points: roll 2d10. Take as 1d100 if no doubles. If doubles, add and reroll. For the test characters I raised or lowered the amount to the closest multiple of 5.

Whenever I got twice the same result (same Power twice or same Advantage/Drawbacks without “fill in the blank” object) I negated the first one.

The same would happen if I got two “Mistrust” or two “Unluck” but not two “Alter Egos”, “Secret Identities” or “Irrational Attractions”.