Raphaël has world-class skills with the rapier. Even though he wasn’t quite good enough to best him, he was able to go toe to toe with Nightmare for an extended period of time.

He does also have a fantastic will and drive. For instance, Sorel was able to drag himself back to his mansion despite having nearly mortal wounds.

His education and privileged upbringing gave him a surprising array of skills. That includes both medicine and financial management.

Lastly his charisma and cunning should be underestimated. He was a master at largely staying out of trouble through political wheeling and dealing. He was later able to charm his way into a wealthy man’s good graces. Then he poisoned his benefactor and convinced the rest of his servants that the man had simply taken and an unexpected trip.

As a result of this murder, Sorel commands his victim’s vast wealth.

Raphaël was originally more of a typical classic Power Lust villain when he was first introduced. But after Amy saved him he grew into more of a Psychopath due to his unhealthy obsession with the girl.

Being exposed to the taint of the cursed blade and developing vampirism didn’t really help improve the situation. 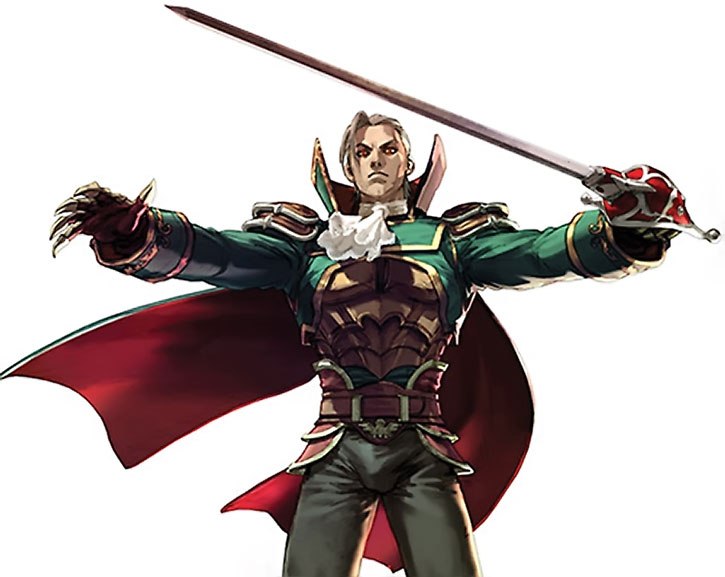 Namco rather tastefully doesn’t really go into exactly what sort of an obsession he has with the girl, whether it’s more of sycophantic one or whether it’s a full on Lolita complex. They kind of leave it up to the viewer to decide. But in any case, it’s quite clearly an unhealthy one.

Why not just drop him in as is? He’s clearly insane so having him believe that he’s some sort of fugitive noble on the run isn’t too much of a stretch even in modern times.

Amy might not even be real and could perhaps be only a delusional figment of a deranged man’s imagination.

Bonuses and Limitations:
Vampirism has No Range.

Drawbacks:
Creepy Appearance (glowing red eyes), CIA toward Amy, CPI (obsession with creating the perfect world for Amy and him), Minor Rage, Misc. Advantage: Raphaël receives a +1 CS OV/RV penalty to any action taken during the day due the Soul Edge tainting him.

Equipment:
Flambert [BODY 05, EV 05, R#00]. This long rapier is an heirloom in the Sorel family. Before cutting all ties with his family and leaving aristocracy, he managed to steal it. The rapier is considered a masterwork weapon and thus has slightly higher stats.

Raphaël’s Wealth score has been all over the place. It’s not unreasonable for his Wealth to have started out at a 10 or even a 12 given that he was the head of one of most powerful and influential family of French nobility. After he went on the run his wealth score was likely very low as he had next to nothing.

After befriending the wealthy nobleman and stealing his estate his resources has consistently been pretty comfortable despite the fact that he’s had to run several times.

It is generally assumed that he always keeps enough ill-gotten gain around to live comfortably. In his last appearance he was able to employ at least two servants, so 6 may very well be lowballing his actual wealth.

Likewise he has often had an Expansive HQ, with excellent facilities (most notably libraries full of rare and hard to find books) as well as other perks, but he seems to keep losing these whenever his enemies catch up to him.

On the matter of his Arch Enemy it always seems that someone somewhere is always out to get him, usually an angry mob, and they often force him to exit post haste and leave a lot of his recourses behind.

It seems that this is a common theme for the character to basically every adventure he should have some sort of Arch Enemy after him although it’s unlikely to be the same person.

Likewise Raphaël didn’t start out as an insane megalomaniac. He gradually grew to fill the role as his misfortune and prolonged exposure to the Soul Blade’s curse drove him to it.

In his first appearance in SC2 he would have an MPI and a MIA, but this had grown into an SPI and a SIA by SC3 when he also acquired his Minor Rage. By SC4 he’s completely lost it and has the above stats.

Likewise his appearance and demeanor also gradually got creepier. It wasn’t severe enough to gain the actual Creepy Appearance Drawback until SC4.

Finally the focus of his obsession, Amy, isn’t actually a Dependent. By SC3 she is a playable character and thus capable of fighting and taking care of herself.

The only real Dependency she has is all in Raphaël’s head. He’s actually the one who is dependent on her to give his life meaning and not the other way around.