Centuries of selective breeding have endowed Raphe with superhuman strength, endurance, and intelligence.

The Establishment is a secret British government-sponsored super-group. It has been protecting Britain since the 16th Century. Two of its founders, Mother and Dr. John Dee , also began a program of selective breeding, designed to create an army of supermen.

Equus is the end result of the experiment. Whether the program continues or whether any other subjects remain alive is unrevealed.

While attending a party he met, and fell in love with Scarlet Fantastic. The two were eventually married. They also became part of the modern incarnation of the Establishment.

The Establishment wades in

He took part in fighting the Daemonite invasion at Hobb’s Bay, and the subsequent battle over London. These resulted in the Establishment’s existence becoming known to the public.

They soon met the returning astronauts from a mission to Venus in the 1950s. But these turned out to be artificial recreations of the astronauts, created by the organic nanite Venusians. These then burst open into a constantly growing swarm, adapting all matter they came across.

Mr. Pharmacist managed to destroy the Venusians. The Establishment then used their technology to saturation bomb Venus with a biological agent designed to eradicate the Venusians. This wiped them all out, or so they believed. A few of those on Earth had actually been acquired by Dr. Orwell.

On a road to Nowhere

The Establishment were asked by the Russian government for help battling an outbreak of zombies. They discovered that Russian scientists had travelled to Dead Space, and creatures from there had begun travelling to Earth. They managed to close the portal.

When they returned to Nowhere, they were met by Mother, its creator. He warned them that his brother, Dr. Orwell, was travelling to the end of the universe to replace Metavac.

The Establishment accompanied him. But when they reached the end of the universe, they discovered that Dr. Orwell had been replaced in his own scheme by the Venusians. These proceeded to try and destroy Metavac.

While unable to defeat them alone, the Golden bought time for Charlie Arrows to contact Metavac, and protect it from the Venusians. Equus presumably died at the end of the universe.

Raphe plays the part of a proper English gentleman. He always maintains an aristocratic detachment from event, except when alone with his wife.

He is a patriot, devoted to the protection of his country, and will happily leap into battle, even if it does destroy his immaculately stylish clothes.

All members have communicators, which allow instant communication with Nowhere from any point on the planet [Radio Communication (Scrambled): 20]. And they can all access a storage system, the Floating Arsenal, to access equipment that they may need on a mission. Each member can access an 8AP ABCD Omni-Gadget. 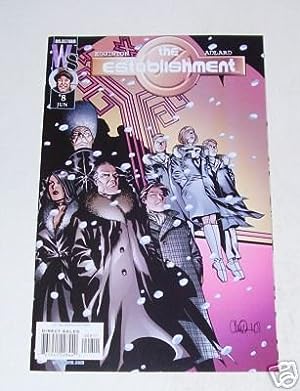