Rapture seems to have been modelled after the abilities of Angel and Nightcrawler. She possesses the former’s wings and the latter’s blue fur, acrobatic prowess, and swordsmanship.

Her wings allow her to fly with great manoeuvrability, and she always carries her sword into combat as her primary means of offence.

Rapture is actually an artificial being created by Cerebro when it gained sentience and took on a physical body.

She was given a physical body and artificial memories, believing herself to have spent her recent years within a nunnery. She remembers living a quite different life prior to this, which hasn’t been revealed. Yet it should prove interesting since it will have to incorporate a rationale for her swordsmanship.

Cerebro first sent them to attack a group of X-Men on board a cruise ship, to abduct Shadowcat. Hostilities erupted between the two groups, seriously damaging the ship. They managed to escape with Shadowcat as their captive, taking her back to the hidden bunker they were using. There she met Cerebro, who appeared as Professor Xavier.

After Shadowcat helped Cerebro, believing him to be Xavier, overcome programming left in him by Bastion. The new X-Men were then dispatched to ambush the real X-Men, blowing up their Blackbird in flight, and attacking its occupants. The real X-Men were saved when Colossus and Nightcrawler arrived in another Blackbird. But that was then shot down by Mercury in Cerebro’s X-Men’s Aurora.

When Shadowcat broke free, they tried to recapture her. But they failed, earning themselves Cerebro’s displeasure.

He next dispatched them to the Cape Citadel space centre. The mission was to stop the launch of a space shuttle carrying a Mutant Defense Net. This technology was designed to keep track of Mutants, and eliminate them when possible. They again come into conflict with the real X-Men. 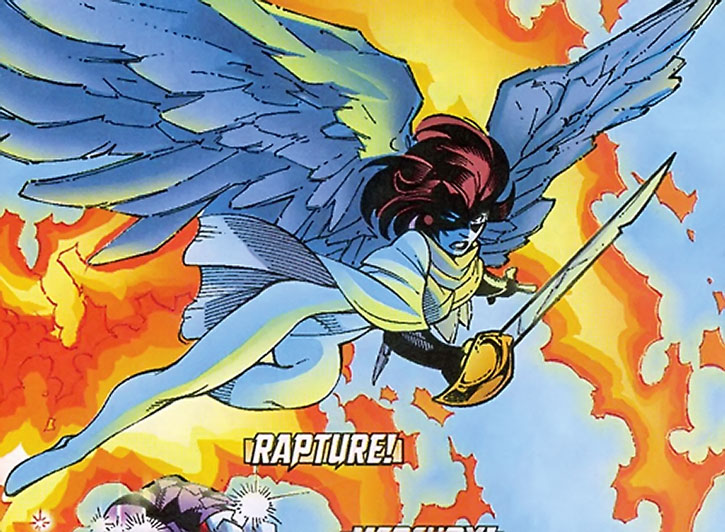 During the battle, Cerebro reveals its true nature. This gave the team time to escape with the satellite from the shuttle. However, the real X-Men intercepted them before they could get far. They caught the ersatz X-Men by surprise and destroyed the satellite.

Cerebro transported the team away, soon returning them to digital storage.

Deeply religious, Rapture seem a calm, compassionate, and sometimes nearly timid, individual. When in combat, however, she throws herself into the action, happily leading the attack. She has discovered a mutual attraction with the Grey King.

“Ask your questions of God, upon meeting him.”

“Surrender and survive, or persist and perish !”

“Your cut is a vulgar gash, whereas the cleave of my sword will be a holy rending of your soul — leaving it to ascend or descend depending on the type of man you are.”

“Beloved ! We are with you ! The heathens will not destroy our dream !” 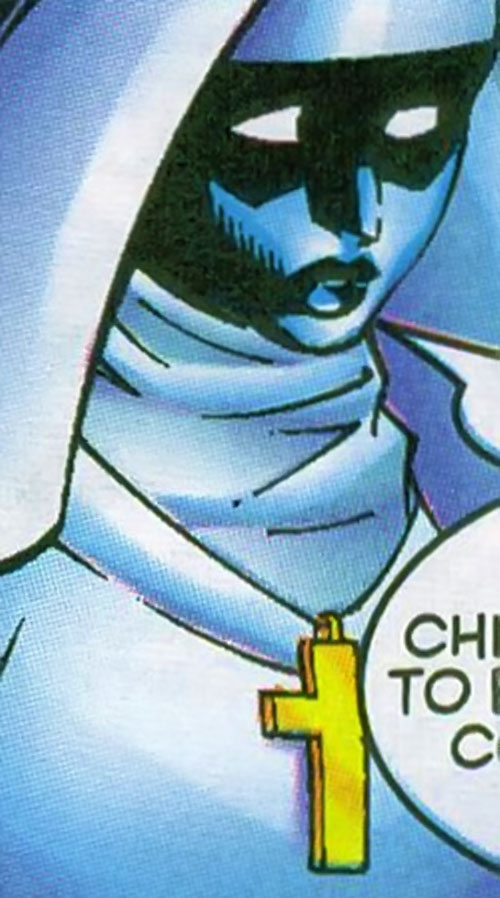