These are their stories.

This profile is a “semi-technical” one. Meaning that it is laced with technical game data, but people who skip those should still understand the material.

This version appears in 1970. They were a very brief random encounter on the path of Captain Mar-Vell (Captain Marvel v1 #20).

The Kree warrior spots a tornado whilst flying across the US. He then notices the Rat Pack rolling in to pilfer a town devastated by the twister before the National Guard can arrive. Mar-Vell beats them up and resumes his flight. Go Mar-Vell !

This version of the Pack consists of five men in fully-covering green uniform, armed with rifles, and operating a speciality vehicle. They quickly deploy in small towns stricken by disaster and grab the cash, medical supplies, valuable raw materials (such as radium) then run away before well-armed authorities can arrive.

They are led by a sixth man, who has a revolver instead of a rifle, a Weaponry (Firearms) Skill of 05 and about 005 HPs to his name.

They were defeated within Phases by Mar-Vell. 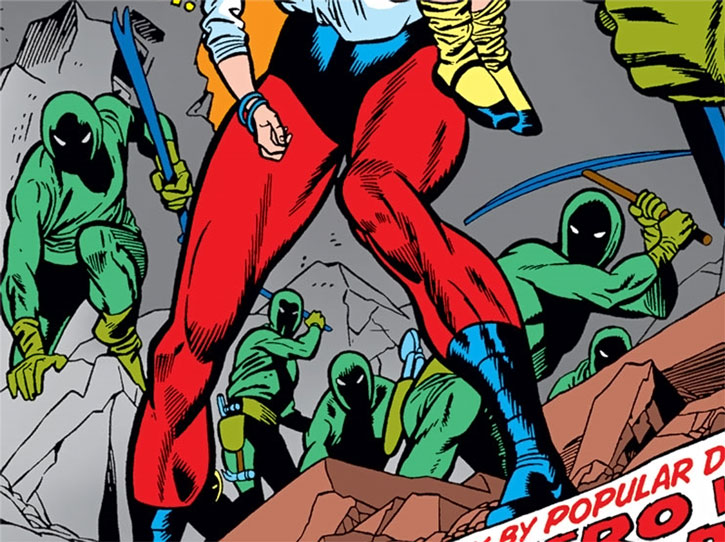 This version of the Rat Pack conducted numerous successful raids, easily thwarting the police. They had at least one secret high-tech base hidden in the desert, and access to superior equipment. They were run as a paramilitary unit, though there was considerable friction among its members.

This Pack was assembled by “Joshua Plague”, a dangerous fellow wanted in a different countries. As it turned out, Plague did not actually exist. It was an alias used by the shape-changing Super-Skrull.

This gang dispersed when they discovered that their leader was a metamorphic space alien. I don’t think its members have been seen since. However, they were quite competent and there’s a good chance they’ve had interesting activities since.

This is this version of the Pack that started having its members refer to call each other by a number.

Advantages:
He seems to think he has Leadership, but I’m doubtful.

Notes:
Number One is the leader of the former version of the Rat Pack, recruited by Plague to be his second-in-command. Tougher than before and much better-armed, Number One really wants to be the field commander of the new Rat Pack and to have a clear chain of command. He resents the secrecy that surround Joshua Plague.

Number One considers himself to be an unhesitating, military-style commander and a pragmatic, tough leader. He was still bitter over the first Pack having been so casually steamrolled by Captain Marvel, and seemed quite ambitious.

Notes:
Number Two is Marie Duchailu, aka Madame Menace I, aka the Crime Queen of New Orleans. The Maggia took over her Big Easy turf, forcing her to flee and eventually join the Rat Pack. Madame Menace is a superior martial artist, a shrewd manipulator, and presumably a competent crime lord.

She has an honourable, frank streak. Thus, she was fed up with the masks and secrecy of the Rat Pack. She likes to fight one-to-one with her bare hands (and bare feet, I might add). She does not normally kill, in order not to worsen her rap sheet – though no one else in the Pack cares about that.

Madame Menace was busy manipulating the various Pack members to be on their good side. Presumably she wanted to ensure that they’d be willing to help her with later plans. One imagines that it involves reclaiming her New Orleans turf.

Notes:
Number Three and Number Four are brothers. “Joshua Plague” recruited them by busting them out of death row, so they likely have a long, shared criminal career.

Notes:
Everyone thought that #5 was just a dour and obedient criminal with some sort of super-strength ability. But he was secretly a robot in the service of the Super-Skrull. His true nature became evident when he was accidentally electrocuted whilst fighting the Red Wolf. #5 was then wrecked by Tigra, though he presumably could be repaired.

Number Six was Jules Bannion, a spy working for “Joshua Plague”. No other gang member knew anything about #6. Number One resented Plague’s secrecy about #6, especially as Number Six provided precious information to direct the Pack’s strikes. Bannion was masquerading as a well-connected philanthropist with some exotic contacts (including the Cat People community on Earth).

Bannion was not present when it was revealed that Plague was the Super-Skrull. After the gang fell he had no idea what had happened, and nobody knew anything about him.

There is no known connection between this Rat Pack and its predecessors. However, their modus operandi as pillagers and profiteers was similar to that of the previous two Packs, and they used methods and uniforms quite similar to the second Pack’s.

It is quite possible that their Number One is the same Number One as the second Pack’s and the leader of the first, but this is an unsubstantiated hypothesis.

The first documented operation of this Rat Pack took place in 1997 (Thunderbolts v1). In the wake of the Onslaught crisis, an army of Sentinels had occupied and damaged New York City. Geneticist Arnim Zola hired the Pack to deploy quickly in the wake of the disaster and procure human subjects for his experiments.

On the side, the Pack members also pillaged for valuables, looted corpses, and the like. 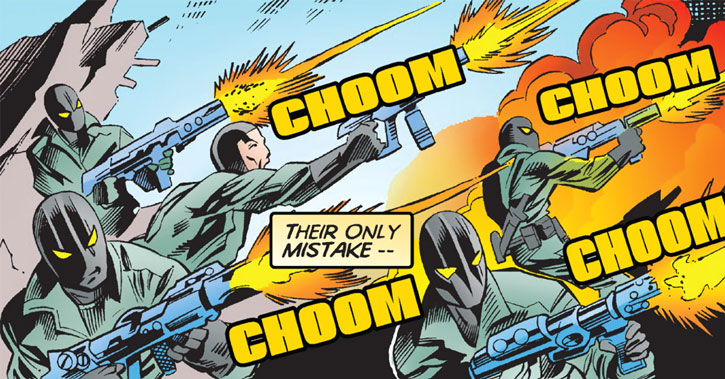 The Pack’s mission was generally successful. One of the subjects they captured was Hallie Takahama, who would become Jolt. The newly-formed Thunderbolts attempted to stop the Pack, but the pillagers escaped in the nick of time.

They resurfaced hours later, but only to lead the Thunderbolts into a trap. Zola had apparently hired the Rat Pack to fly away as soon as they saw the Thunderbolts, and lead them to an ambush site manned by the Wrecking Crew.

This Rat Pack has not been seen since.

Update – Our esteemed Marvunapp colleagues  recently asked Mr. Busiek  about the Pack. He said that :

These operatives sport fully-covering uniforms (except for #1, who operates mask-less). They are highly-trained and experienced at their grisly trade. The refer to each other by number (for instance, “Number 14”), and are confident and disciplined. They compare well with an elite infantry force. 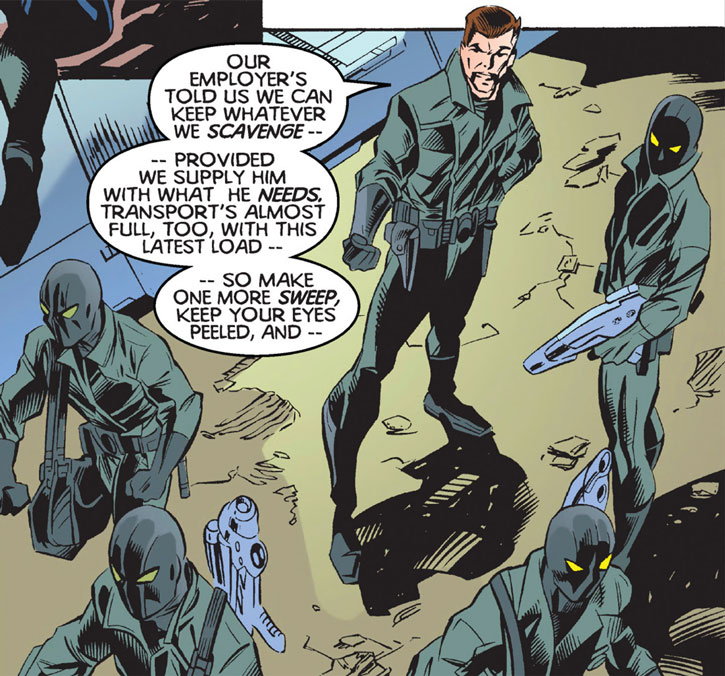 This Rat Pack’s first priority is to complete the mission through any mean necessary. Its own safety comes second. However, they plan for it. Their standard M.O. is to have escape tunnels throughout their zone of operation.

How these tunnels are dug is unknown (perhaps they have specialised robots digging while they work ?). But they can be used to evacuate very quickly and will immediately be closed using pre-placed explosives. The order to perform such an evacuation is “mousehole”. If tunnels are impossible, they will use individual jet packs to fly away.

The captions noted that #1, an experienced and able commander, was not the first man to head this Rat Pack. That implies that the previous #1s had been too weak and lacked professionalism, leading Pack members or circumstances to put an end to their leadership. 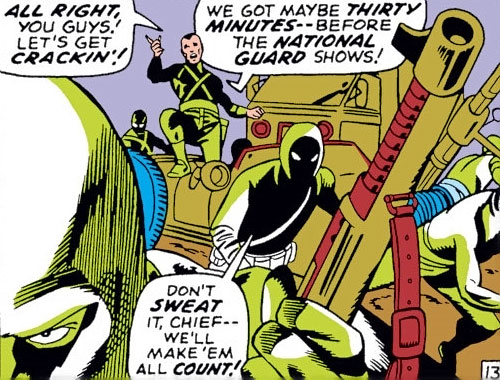 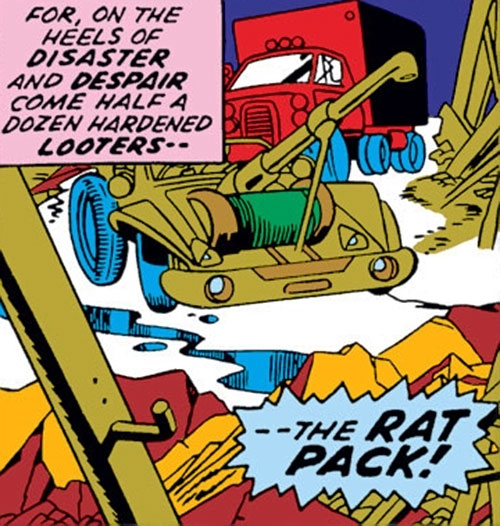 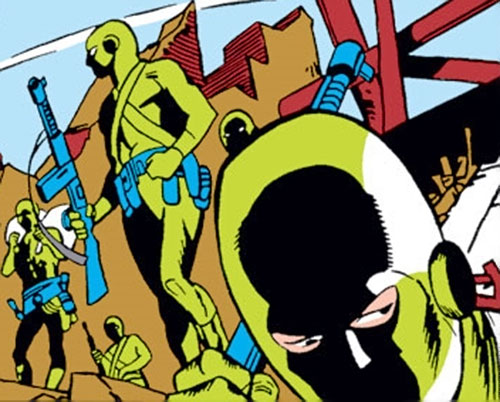 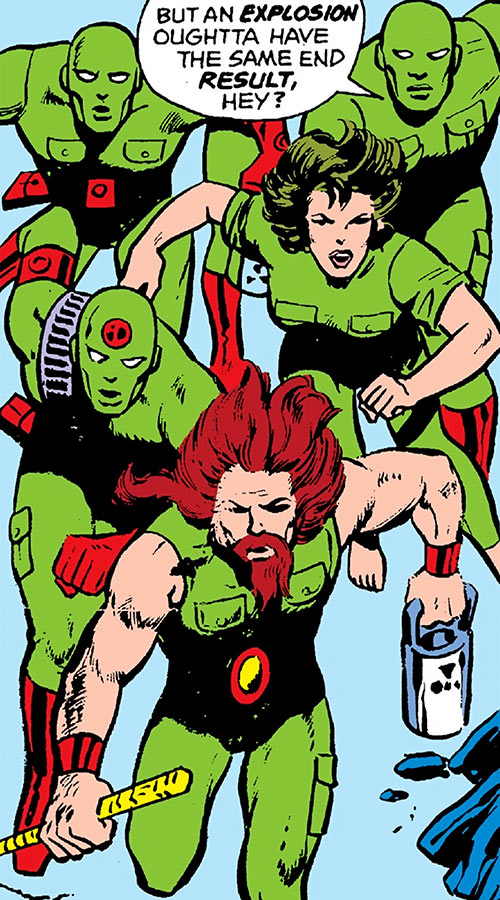 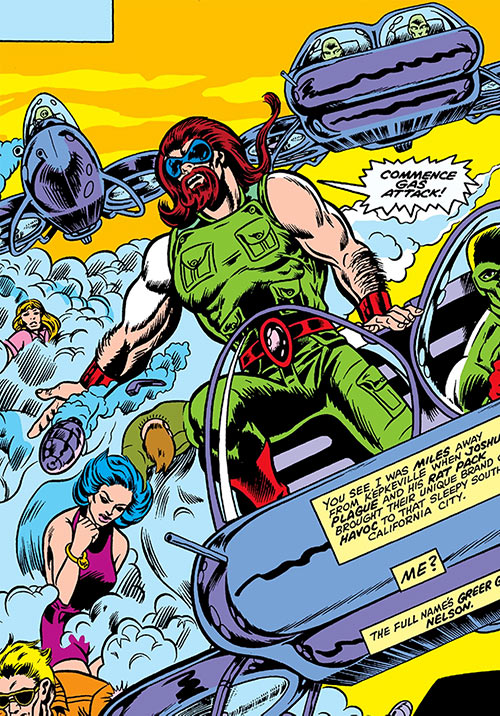 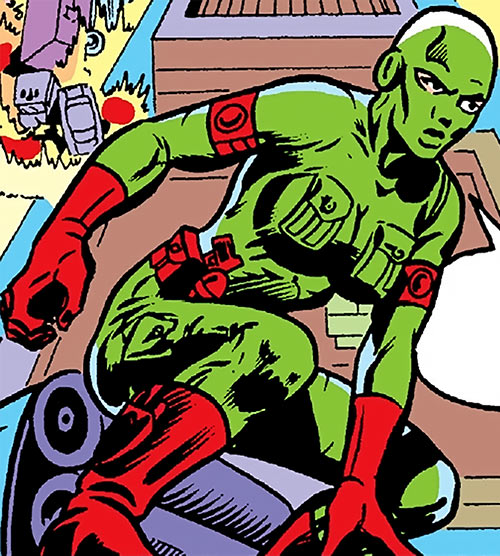 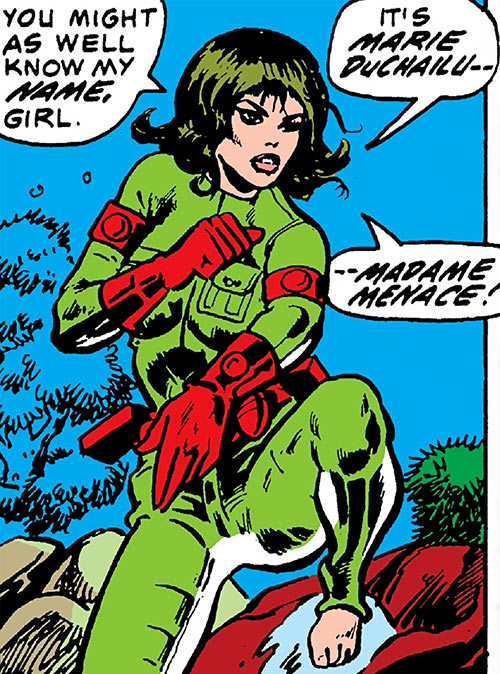 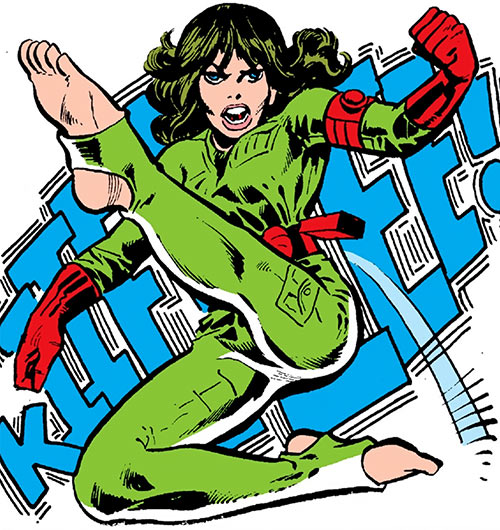 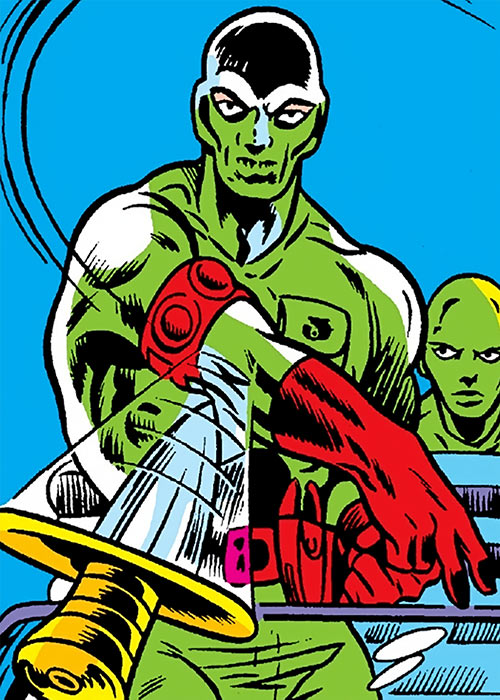 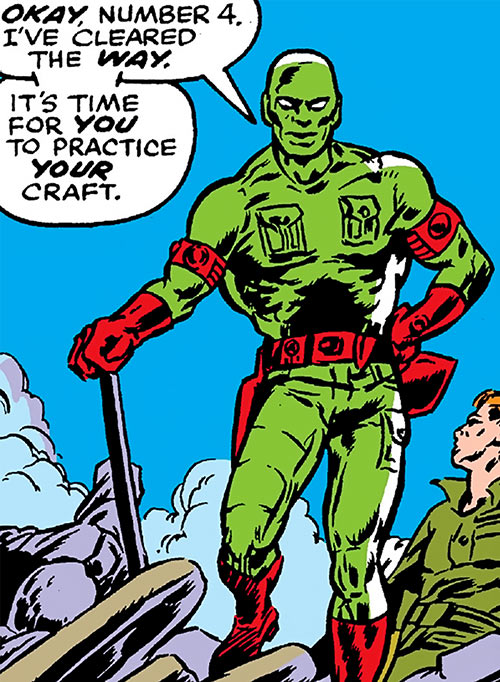 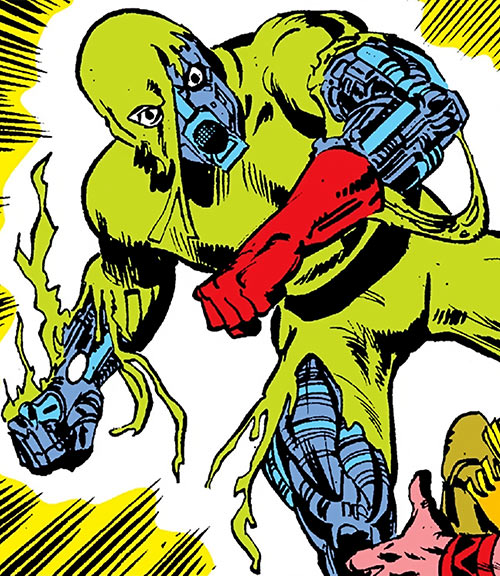 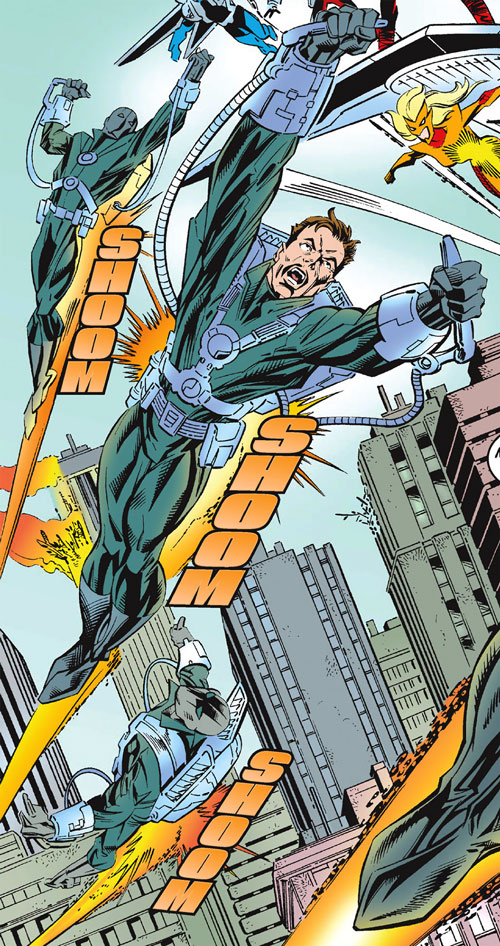 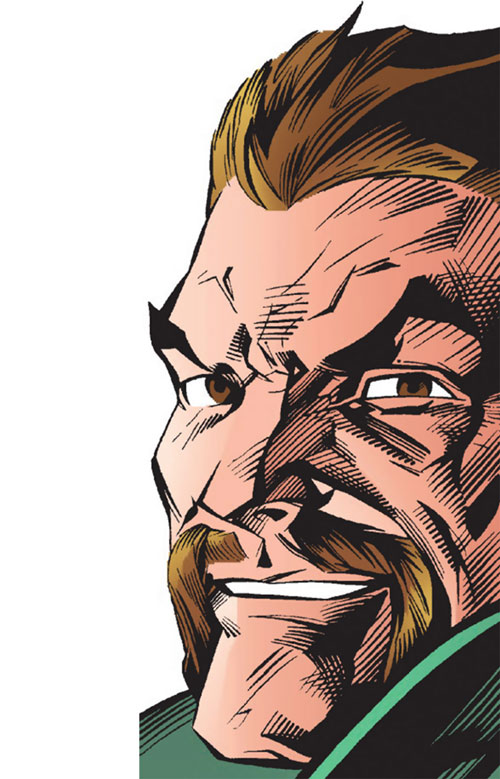 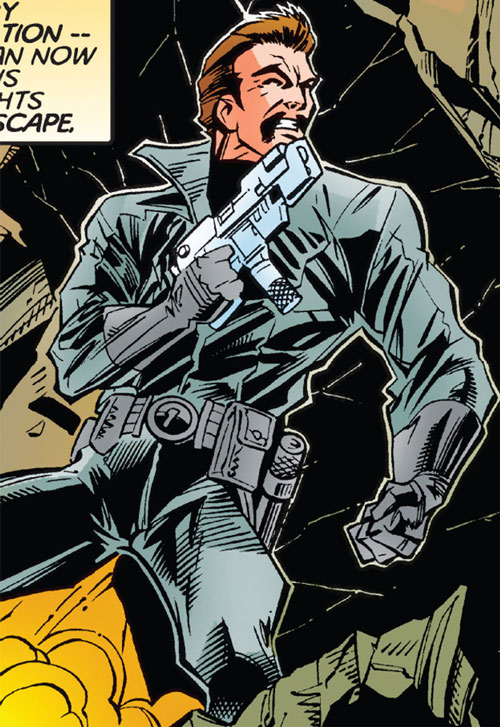