Ratchet is one of the most enduring characters in the Transformers franchise. He was one of the main characters early on in the comic series despite his lack of offensive weaponry. In the first 12 issues of the series, he had more appearances than any other Autobot (save Optimus Prime). Ratchet was ultimately responsible for defeating Megatron.

Ratchet’s robotic body grants him superhuman strength (“Class 10”), durability and renders him immune to all forms of human frailties (i.e. aging, sickness, disease, hunger, fatigue, etc.). He can survive virtually any injury. Even if he was smashed to pieces, Ratchet could be revived upon being repaired.

Like all other Transformers, Ratchet can reconfigure his body into a secondary form for the purpose of disguise. Ratchet’s alternate form is that of a Nissan Cherry Vanette SGL Coach Ambulance. While transformed, he retains his intelligence, capacity for speech and mobility.

Ratchet is the Autobot’s main medical officer. His knowledge of Transformer physiology was unmatched on Cybertron. Given the right materials and enough time, he can repair virtually any machine.

Unlike the other Autobots, Ratchet has no true weapons of war. Instead, he possesses an assortment of laser scalpels, arc-welders and super-cooled fluid dispensers that he uses to effect his repairs.

Ratchet was among the Autobots selected by Optimus Prime to destroy an asteroid field that threatened to destroy the planet Cybertron. Ratchet and his allies were rendered inoperable after a surprise attack from their mortal enemies, the Decepticons.

The Autobot leader, Optimus Prime crashed their ship, the Ark into the base of Mount St. Hilary in order to prevent the Decepticons from achieving total victory. As a result, Ratchet and the others lay inert for over 2 millions years. 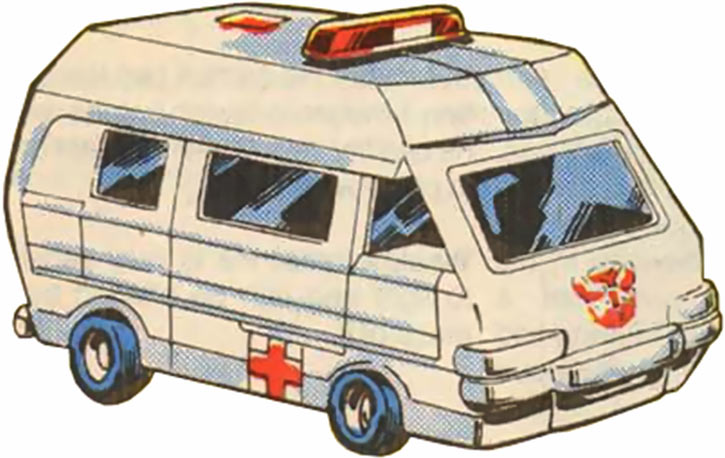 He was revived nearly two million years later, after the volcanic Mount St. Hillary erupted and awakened the Ark’s computer and repair systems. The damaged computer systems mistakenly assumed that the mechanical devices that littered the Earth’s surface were sentient machines. It thus rebuilt the Cybertronians in their image. Ratchet, coincidentally, was rebuilt in the image of an earthen Ambulance.

The Autobots and Decepticons renewed their million year conflict almost immediately, while searching for an appropriate fuel source. Ratchet found himself with plenty of opportunities to practice his considerable repair skills during the Autobots first few days on the Earth.

In the moments after one of their conflicts, Autobot tempers flared. In a moment of chaos, Sparkplug Witwitcky was injured. Recognizing that he needed greater aid than the Autobots could provide, Ratchet volunteered to take both Buster and Sparkplug to a nearby hospital. While he was at the hospital, the Decepticons attacked the Ark and rendered all of the Autobots within it inert.

When Ratchet eventually returned, he was shocked to find Decepticon sentries guarding the entrance. Left with little choice, Buster Witwicky snuck past the sentries and entered the Ark. Ratchet waited until Buster returned with news. The Decepticons had control of the Ark and all of the other Autobots were dead. 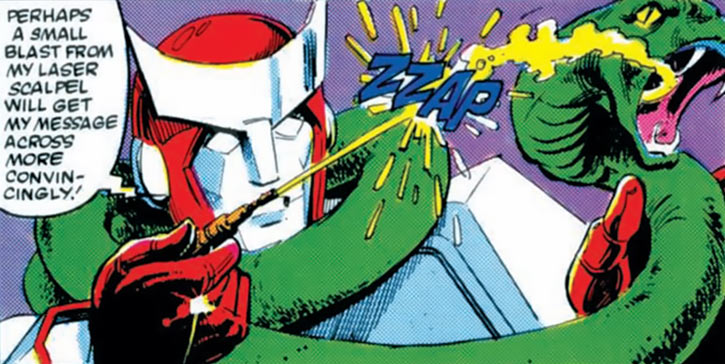 Rather than further risk Buster’s life, Ratchet took the human back to civilization before returning to the Ark once more. When he arrived, he stole into the Ark covertly and eventually stumbled upon the head of Optimus Prime. Though Prime had no body, he was still conscious. He implored Ratchet to try and free his brothers, ordering him to rise up and meet the seemingly impossible challenge.

Though Ratchet was terrified and doubted his capabilities, he set out to free his brothers. Unfortunately, Ratchet immediately stumbled upon Megatron. Though he still suffered from the wounds inflicted upon him by Sparkplug’s treachery and Shockwave’s power, Megatron’s raw power far outstripped that of the Autobot medic’s.

Thinking quickly, Ratchet struck a deal with Megatron. He offered his help in defeating Shockwave and returning command of the Decepticons back to Megatron. In return, Megatron agreed to return the wrecked Autobots and control of the Ark to Ratchet.

Ratchet travelled to the Savage Land to recover the Dinobots, the first group of Autobots awakened by the Ark in order to deal with Shockwave in the past. The Dinobots lay dormant at the bottom of the tar pit where they had faced and defeated Shockwave millions of years in the past. When he found them, he repaired them and returned to civilization.

There he tricked Megatron into meeting him on the side of a massive Ski-Hill. When Megatron arrived, Ratched convinced him by using footage from the Dinobots original battle that Shockwave had been defeated. Megatron, predictably, reneged on his part of the deal and immediately attempted to kill Ratchet. 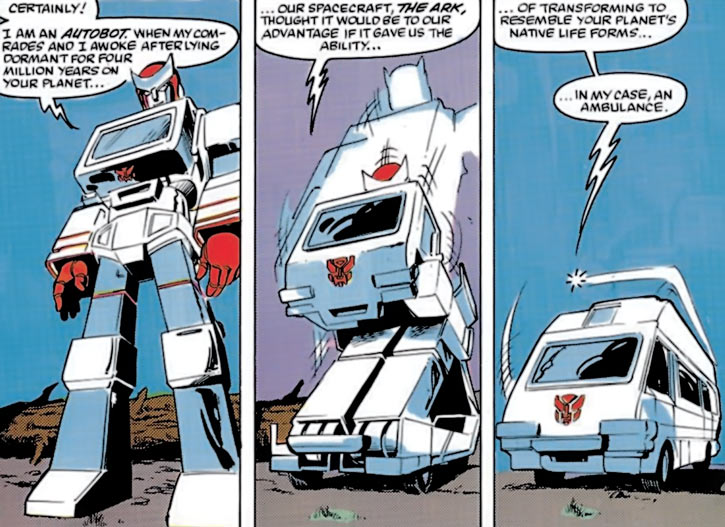 Ratchet, expecting Megatron’s treachery, unleashed the hiding Dinobots upon his much more powerful foe. Despite their advantage of surprise, Megatron’s strength proved to be too much for the Dinobots. He quickly rendered them helpless and turned his attention back to Ratchet.

While Megatron gloated, Ratchet charged at him and struck him with the full weight of his body. The Decepticon simply shrugged off the Ratchet’s assault, laughing at the Autobots desperation. Fortunately for Ratchet, while Megatron’s chasis could handle his assault, the ground beneath him could not.

The ground crumbled under the force of the impact and sent Megatron tumbling off the cliffside. Greatful for his good fortune, Ratchet returned to the Ark where he found that the Decepticons had abandoned the ship. With nothing remaining to stop him, Ratchet repaired his Autobot brethren.

Ratchet is a large, humanoid robot. His chassis is mostly white with grey accents. His fists and helmet are red. His face is clearly human looking, with large white eyes and oval-like protusions in the location where his ears would be if he were human. A large ‘V’ like fin sits upon his bow. Finally, the Autobot brand sits prominently in the lower-centre of his chest plate.

Ratchet appears to be a standard white and red Nissan Cherry Vanette SGL Coach Ambulance when he transforms.

Of all the Autobots, Ratchet is the most curious about the human race. He has spent most of his free time learning as much as he can about them as possible. Over his time on Earth, he has amassed an extensive library of human customs, mannerisms and sayings.

Unlike most of his peers, Ratchet is not a fighter. He is one of the “weakest” Autobots; only Bumblebee is weaker. To make matters worse, the weapons that he possesses are actual surgical instrumentation.

Because of this, he suffers from bouts of self-doubt when faced with violent situations. When forced to fight though, he is a clever and strategic thinker.

“Parties ! My favorite pastime back on Cybertron !”

“It’ll take more than a recycled reject like you to make spare parts out of me, Megatron !”

“The activities of these humans never ceases to intrigue me.”

“I may lack your credentials in the ways of war, Megatron, but I’m no fool !” 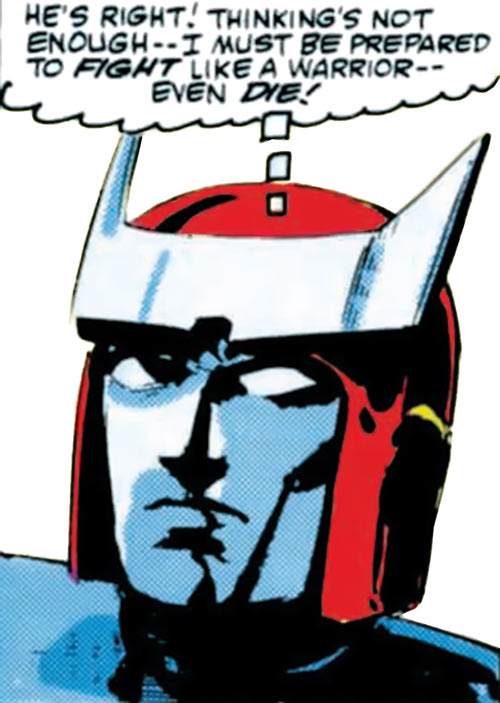 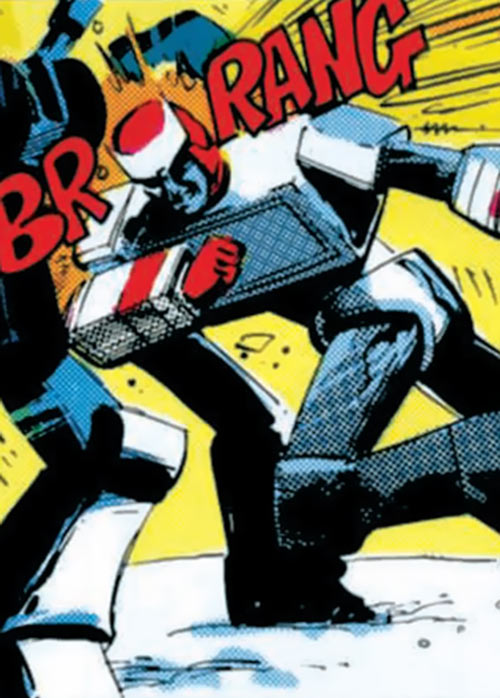 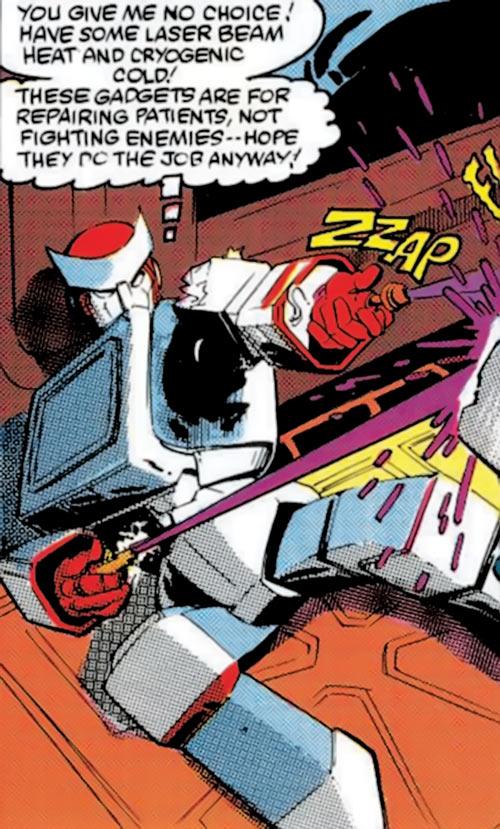