The Rattler is a professional super-villain with an implanted bionic tail. The tail has a built-in ultrasonic shock canon.

This advanced weapon is quite flexible. For instance its first witnessed use was to create a vibrational field. The field swatted Captain America’s shield out of the air before it could reach the Rattler, by countering its momentum. He has also used it to immobilise Storm in the air. In DC Heroes RPG terms, it does Friction control.

When used more offensively, the canon is not a precision weapon. Rather, it blows up an area. This can pose tactical problems. Therefore, the Rattler tends to pay attention to flying opponents since they are more likely to be clean targets.

The Rattler’s body suit is said to include a light Vibranium  mesh to protect him against vibration attacks, such as the side effects of his tail. It is unclear whether he can safely use his tail canon when not wearing this costume.

When he fought against Force Works, the Rattler produced a fairly large energy rifle, apparently kept in the current headquarters of the Serpent Society. He called it his “rattling gun”. Presumably this is a longer-ranged and more discriminating option than his tail. There’s a good chance he bought it from A.I.M..

The Rattler had an undocumented criminal career in Germany before moving to the US. Since he was first seen when Sidewinder launched his Serpent Society initiative, it is possible that the emigrated specifically to join the Society.

Right as the very first recruitment meeting was ending, the Rattler accepted his first Society contract. He was teamed up with fellow snake-themed criminals Anaconda and Cobra. The trio drove to abandoned Brand Corporation facilities to pilfer some advanced mutagenic technology. They managed to accomplish their mission despite Captain America’s interference.

The Rattler and Cobra left Anaconda behind to delay and be defeated by Cap. The Rattler largely did so to see if Sidewinder could teleport people out of prison at will, as he had promised during the recruitment. As it turned out, Sidewinder’s word was true.

During one of the first major contracts of the Serpent Society, the Rattler was part of the Serpent forces looking for MODOK. He was apparently one of the first to attack MODOK. Krueger was knocked out, but his colleagues completed the job. He recovered quickly, and he and Death Adder captured Princess Python, who had deserted during the fight.

Along with Diamondback, Cottonmouth and Death Adder, the Rattler was next caught into a trap set by Porcupine and Captain America. The three male Serpents were arrested, but Sidewinder soon busted them out of prison. Porcupine, tragically, was accidentally killed during the fracas.

When Death Adder was murdered by a Scourge of the Underworld, the Serpent Society went on the warpath to gain intelligence about the killer. The Rattler roughing up some criminals with Kingpin connections so that they would tell their boss that the Society was buying info. The Scourge was later stopped by Captain America.

During the takeover of the Society by the Viper, the Rattler was one of the traitors. Apparently, he had been threatened with death if he did not join the coup.

Diamondback, a loyalist, contacted Captain America and his allies to stage a counterattack. During this battle, the Rattler was defeated by the Falcon and his hawk Redwing. During the fighting, Krueger came to witness the lack of loyalty of the Viper toward her minions.

When it was over the Rattler seemingly managed to explain his situation. He continued working for the Society.

The Rattler continued to be a regular Serpent Society trooper. For instance, he was part of the extensive crew that battled the X-Men after being hired by Llyra and Ghaur.

During this battle, he was somewhat successful against Storm until he got angry at Longshot instead, opening fire at him. The blast was clumsy, and both Longshot and the Rattler were engulfed by the resultant avalanche of loose rock. But the German was soon rescued by his colleagues.

The Rattler was later arrested in unrevealed circumstances, and imprisoned in the Vaults. During a prison break, he seemed mostly interested… in finding the toilets. Presumably he had only been there for a very short time and was just waiting for Sidewinder to teleport him out.

Later, during the trial the Serpent Society held for Diamondback, he voted for her death. In the ensuing commando strike to rescue Diamondback’s allies, the Rattler was defeated by Captain America and Paladin. Most Serpents were then arrested by the Federal authorities’s Guardsmen.

The Society eventually went free and resumed operations, but after a clash with Free Spirit, Jack Flag and Captain America they were easily defeated by Force Works, who came in as reinforcements.

During a subsequent case, the assembled Serpent Society managed to capture Captain America and Diamondback, and steal his shield. Most Serpents, including the Rattler, were eventually thoroughly and single-handedly thrashed by Diamondback. It later turned out that “she” was a souped-up LMD.

When Baron Helmut Zemo assembled a large army of coerced superhuman criminals, to help fight the Civil War on the government’s side, several Serpents were pressed into that “Thunderbolts Army.” The Rattler, Bushmaster and the Cobra were once seen training with Swordsman (Andreas Strucker) and several other villains as part of this.

The Rattler was later seen at a Bar With No Name, along with numerous minor villains (including some Serpent Society colleagues). He very briefly got into a brawl with Spider-Man, but the bartender almost immediately ended the ruckus.

His skin colour is normal for a Caucasian guy, though a bit pale. The lower half of his mask isn’t open to show his lower face, just differently-coloured from the light brown of his cowl. In many panels, his mask gives the impression he has pale yellow skin, but it’s just a snake-themed full face mask.

The Rattler apparently has had some minor cosmetic bionic modifications – fangs and a snake-like tongue. Those do not seem to give him any special abilities. These likely were done just to prolong his serpentine theme.

His tail makes a distinctive “RRRRRRRRR” sound when it’s vibrating.

The Rattler seems to be pragmatic and disciplined. But he’s also a bit of a brute and is interested in the rep killing a super-hero would bring. He seems to be loyal (to an extent) and journeyman-like. He dislikes lucky people, though he had never complained about being unlucky himself.

Given the extent of his bionic modifications, his choice of name for his rifle, etc. he seems to be really, really into the whole snake-themed super-villain thing.

“Okay, who gets the honour of acing the star-spangled jerk ? Death Adder, you got to kill MODOK, so you’re out of the running !”

In this version of the entry I have decided to go for the complex version of his vibration field. He has stopped projectiles but also flying people, so this approach is more accurate. Those who prefer a simpler approach may use a simple Force shield: 08 (only vs. Projectiles, takes up an Automatic Action) instead.

The Master Edition of the OHOTMU lists some abilities that were never displayed in primary sources. Those are:

It is possible that those improvements were intended to appear in future stories. GMs interested in upgunning Rattler should consider them. Presumably those cybernetic improvements were commissioned from A.I.M. or a similar agency. 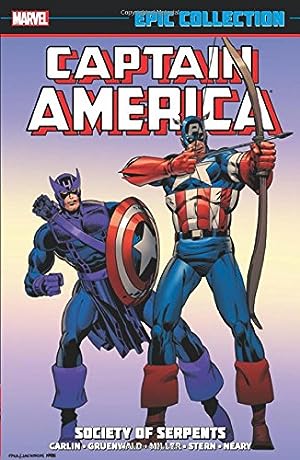 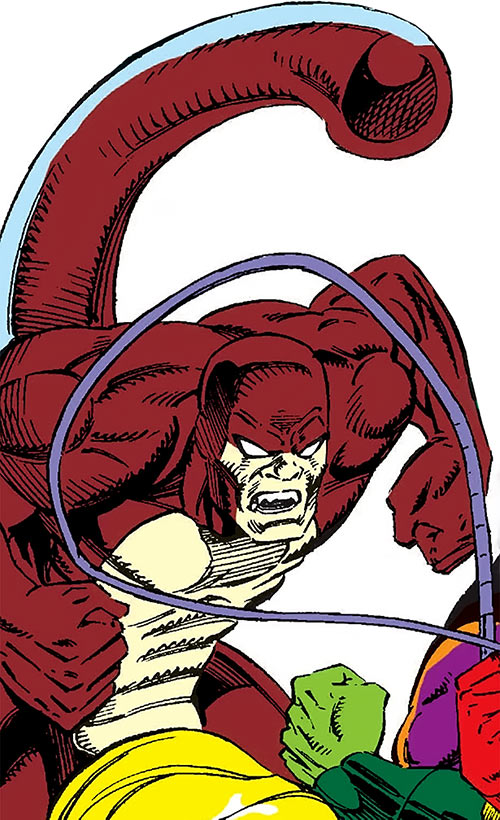 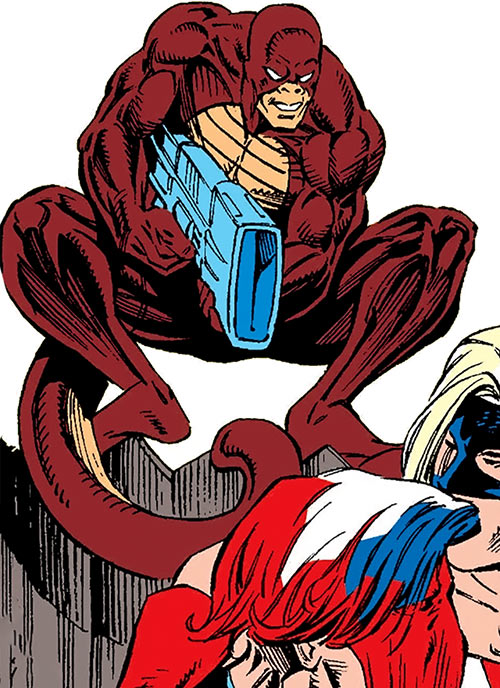 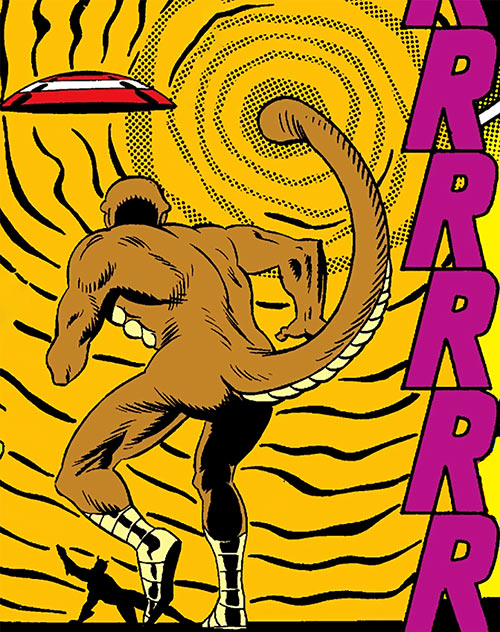 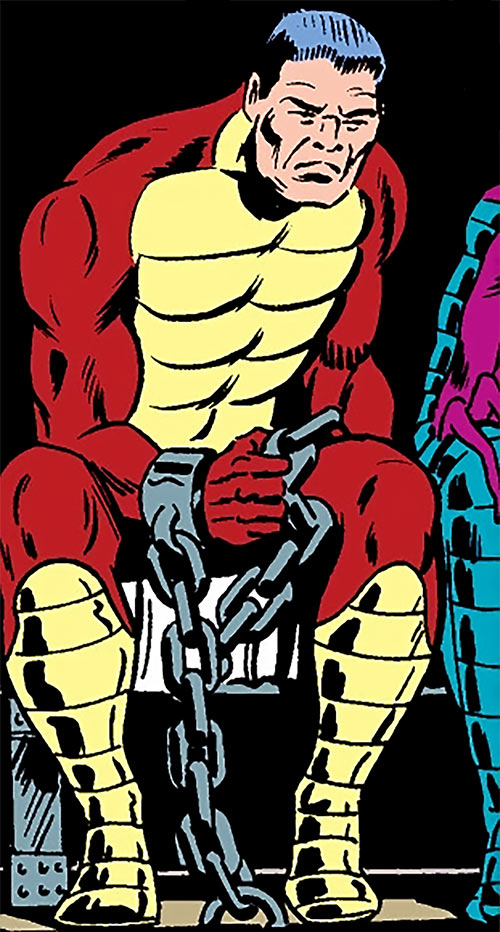 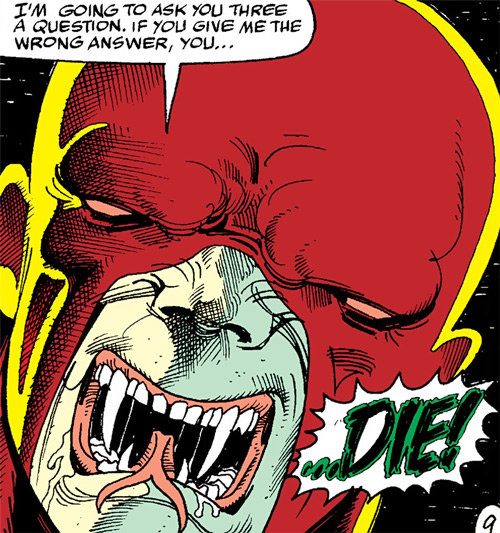