She has the gift of maximal body potential, which means her body functions at much higher levels than what is supposed to be physically possible. She can bench press approximately 180 tons, withstand a drop from several stories without undue damage, hold her breath for half an hour and run more than 50 meters per second.

She even has higher immunity to cold than a normal human, not feeling most cold until it becomes physically damaging. However, her resistance to heat is normal.

This incredible resistance is reduced against weaponry, being only slightly better than human. Her only real vulnerability is that her strength is the result of a psionic ability which depends on her faith in herself, and self-confidence.

Rava is also skilled warrior, having mastered several forms of combat, most notably unarmed and medieval weaponry. She also has been exposed to modern weapons and picked up their uses.

Rava was born in 1974 in the city Olmec-han. Olmec-han is a city extra-dimensionally  shunted away from Earth.

There used to be portals that lead to various places on Earth. Each portal is tied to a certain area of the world where a proud empire of natives once flourished. There were portals to the Nahuas, the Quechuas, and the Mayas. As each polity  fell, a portal was closed and destroyed.

Now, only one portal remains. Its opening to the Amazon rainforest has been guarded by the best warrior the Olmecs could train for the last 300 years.

In 1989, the portal opened and disgorged a single person. That person was Rava, and it was her time to assume her guardianship of the portal, as the Champion of Olmec-han. As per tradition, she was put out into the world at age 15, to survive on her own and to preserve the city Olmec-han and their culture.

It dawned on Rava quickly that the surviving natives in the area were not a threat to Olmec-han. Thus, she took her guardianship for granted. For a year she traveled all over South America.

In 1990, the shaman Night Jaguar accidentally released the demon Soulless from his imprisonment of a thousand years. Soulless immediately set out for the portal to Olmec-han and gained entrance since Rava was nowhere nearby. His ultimate goal was the destruction of the people who’s ancestors had imprisoned him, the Olmecs, and he didn’t waste any time in doing so.

When Rava made her annual visit to the city she found it empty. She found Soulless after she had checked everywhere for signs of her people.

Soulless beat her in physical combat and ejected her from the portal so that she could suffer from her failure for the rest of her life. She ran to get help, and it took her a little over four months to track down the Team Supreme.

They helped her go back and remove Soulless from Olmec-han, and she joined the team in 1991. She tried to adjust to the fact that she was the last of her people left, as well as that she had to build a new life for her, in a world she barely understood.

Rava is a young woman who has been training to be her people’s champion since she could hold a weapon.

In America, as a part of the Team Supreme she is having problems shifting her focus as well as adjusting to living a ’normal‘ life. She does her best, but sometimes her feelings of loneliness crop up. Tormented by the memory of her trainer’s methods, all bloody and violent, she has numerous latent psychological problems.

Sometimes these memories disturb her to the point that she lashes out at friends or concerned strangers. Valiant in the face of this obstacle and the near-perpetual feelings of failure toward her people she constantly fights to maintain her sanity and her individuality.

Rava is a 6’9” tall Amerind woman with a well developed musculature. She usually wears a white tunic over a fullcut bathing suit. She wears primitive sandals laced up to her knees for support and a black belt.

For informal gatherings she wears jean shorts and t-shirts.

Future or alternate plot points would be to play up the rivalry between Rava and Soulless, in which she hunts him down and goes on quests to find ways to contain him again.

Alternately, she could accomplish this and discover that her people were just in Limbo of sorts, and all come back. She however, for failing to protect the gate is exiled, and the gate closed permanently.

In case anybody is wondering where I get these things, from memory entirely. I remember the concepts and I’m just putting them together in a context while designing stats close to the previous mark. I’m not converting from old champs writeups. 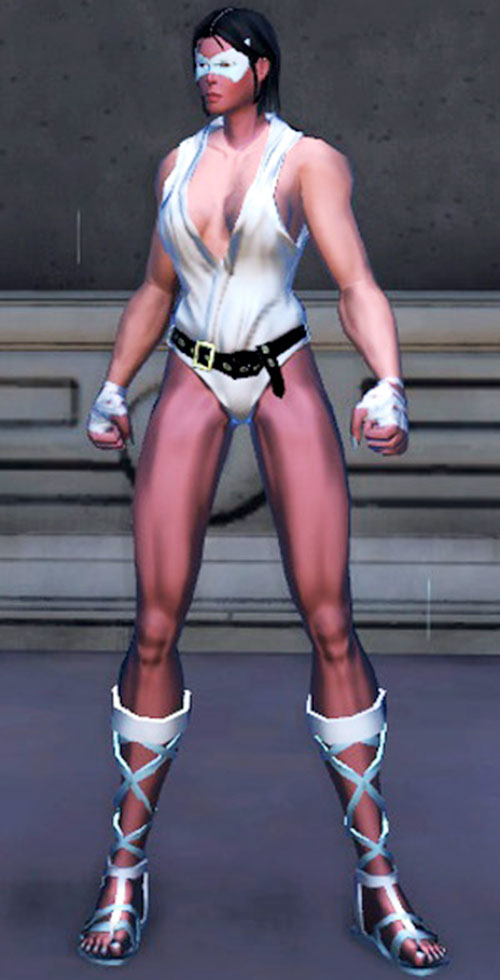 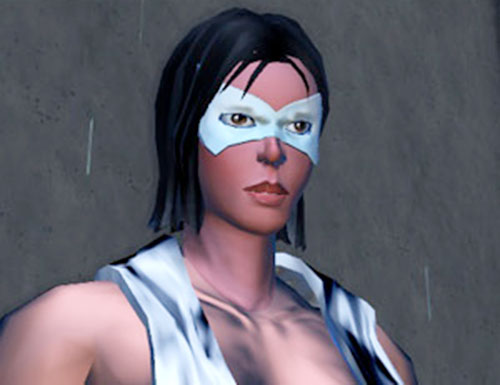