Ravan was one of the characters in the Yale/Ostrander run on Suicide Squad. He appeared from 1987 to 1990.

Ravan is an effective fighter, and a superb killer. He is not quite in the class of prodigies like the Bronze Tiger and Batman.

His greatest strength is his willingness to sneak-attack. Any Player Character in a combat with the Jihad or the Squad should watch his back when Ravan is near, or risk tasting his garrote.

His involvement with the Cyber Church would indicate at least a reasonable skill at gathering followers in a short time as well as some computers skills.

The Thuggees were a cult that worshipped the Hindu goddess Kali and practiced large-scale robbery and murder of travelers in India during the 14th-19th centuries. They would befriend unsuspecting travelers and win their trust kill and robbed them at an opportune time and location.

Assassination for gain was a religious duty for them, and was considered a holy and honorable profession, in which moral feelings did not come into play.

Ravan has been mentioned both as “the new one-man Thuggee cult” and as the leader of a new version of the cult. He can be treated either way.

Ravan was recruited by the Quraci terrorist group the Jihad. They likely promised bringing more sacrifices to Kali. When the Suicide Squad waged their assault on the Jihad, Ravan was Bronze Tiger’s target.

Ravan lost the fight and was crippled. However, Bronze Tiger chose to leave him alive. That was due to either morality or deep-rooted sadism satisfied by Ravan’s suffering, depending upon your interpretation of the event and the aftermath in later SS story arcs.

The Jihad later provided Ravan with an exoskeleton  which compensated for his spinal injury. As a result, he joined their attack against New York. After he was again defeated by Bronze Tiger, Amanda Waller offered him membership with the Squad.

Ravan accepted. He had little concern over who paid him to perform his “religious duties”. Thus, he was just as happy to kill while sponsored by the American government.

During this stint with the Squad, Ravan first encountered Kobra during the latter’s “Janus Directive” plot .

I fought the loa

Ravan was instrumental in Amanda Waller’s plan to finish of the Loa. This was a crime syndicate organized along some of the darker tenets of Voodoo.

The Loa exposed that the Suicide Squad was still being run by Amanda Waller. After initial exposure to the public, the government had officially replaced Waller with a man named Kale. Kale was, in reality, an actor providing cover for Waller’s continuing management of the Squad.

With the Suicide Squad on the verge of being disbanded by her superiors as a result of the Loa’s manipulation, Amanda Waller gathered Ravan, Poison Ivy and Deadshot for an assassination mission against the Loa. At this point, the syndicate was planning to use the New Orleans drug trade to create a zombie army.

The deal for the Squad villains was simple. Assist Waller in killing the Loa, and afterwards walk away free.

The mission succeeded. Amanda Waller was arrested and imprisoned for murder. Meanwhile Ravan left for London, where he set up a ’Cyberchurch‘ as a front for his assassination organization.

Working with Waller to reform the Squad a year later, Batman “recruited” (kidnapped) Ravan from this ’Church‘ (destroying it in the process). Ravan participated in the mission in Vlatava (“The Phoenix Gambit”) for the new Squad and rejoined the Squad full-time afterwards.

With the Squad, Ravan went to Israel in order to capture Kobra. While they were in transit, Kobra was captured by the Mossad’s meta-human operatives, the Hayoth. While guarded by the Hayoth A.I. computer, Dybbuk, Kobra manipulated Dybbuk into implementing his plans. It was a missile strike on the Dome of the Rock .

While Kobra’s plans were being thwarted by the rest of the Squad, Ravan faced Kobra in single combat. Kobra had the upper hand. He had already struck Ravan with his poison walking stick when the Atom (III, Adam Cray) appeared on the scene, striking down Kobra.

Ravan’s last wish was for either the Atom to kill the unconscious Kobra, or for him to step aside and allow Ravan do it. Atom denied him that final wish. Thus, Ravan died from his wounds (in his own words) “unfulfilled.”

During the Blackest Night events , Ravan was one of the various zombies of deceased Suicide Squad operatives.

It is through this practice that he both prevents and worships Kali. In this, his natural nemesis is villain Kobra, who wishes to hasten the Kali Yuga.

Ravan generally maintains a calm, controlled manner, but he is truly passionate for his cause. His loyalty to his religion is absolute, but he has no reservations about changing loyalties to follow the path that leads him most easily to his goals.

Killing dozens is not as important as continuing the fight and pursuing Kobra, even when that means allying himself with former enemies.

(When strangling someone) “Another thousand years, Kali !”

When a mad Bronze Tiger defies him to a third fight:
[Laughing] “Oh, poor Tiger ! Trying to convince others how a beast he is at heart. I have look into the face of true evil. Compared to such as Kobra, you are a lamb !”

(As Batman enters the Cyberchurch) “Greetings, man of the bat, beloved of Kali. What brings you to my temple ?”

Ravan’s connections, advantages and drawbacks change based his current alliances. 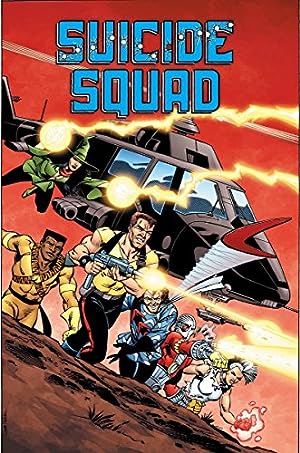 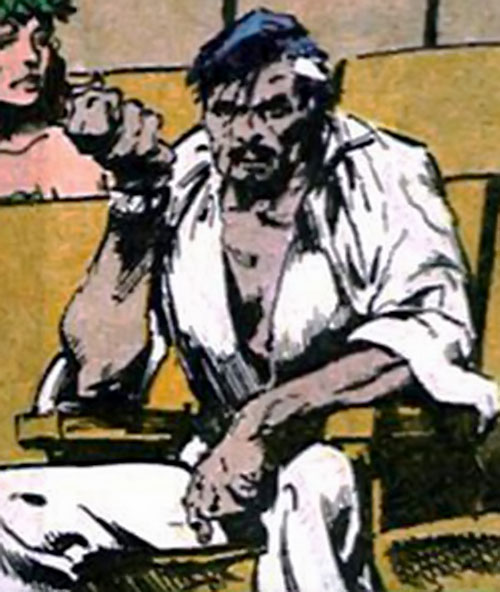 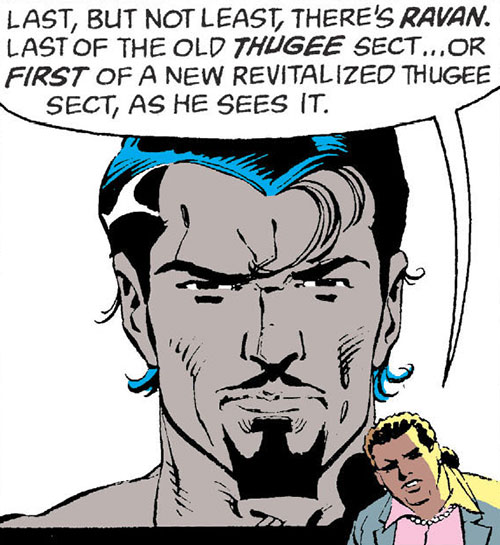 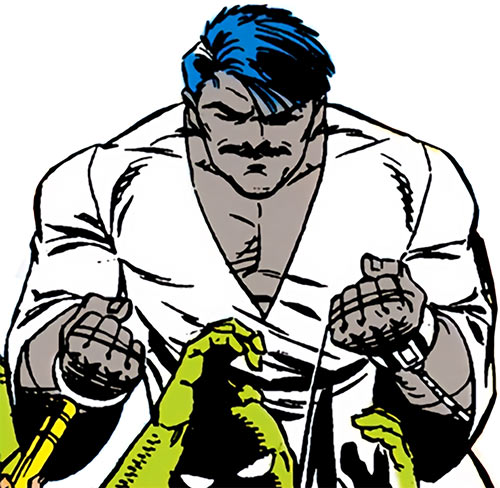 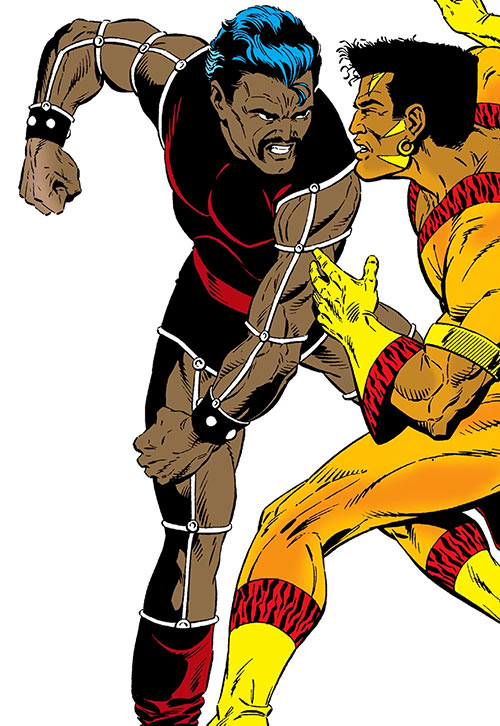