Razer is a Seedling  with very straightforward powers. She can fly at high speeds, and shoot lasers from her eyes.

She’s sometimes seen shooting energy blasts from her hands. It’s unclear whether this is a continuity error or a normal aspect of her powers.

Razer is quite proficient with her Seedling abilities, and post-human combat in general.

Razer is one of the classic MERCs. These are a group of super-powered mercenaries working with the ex-terrorist Deathtrap to serve as ruthless killers.

Unlike with other MERCs, something is known about Razer’s past. She actually was a Stormwatch recruit who defected and started working with Deathtrap since the pay was much higher.

She was activated by Synergy, and there are hints that Razer actually was trained in SPB combat, perhaps by Backlash.

Still, she participated in Deathtrap’s ambush, helping with capturing Sunburst, Nautika and Flashpoint for brainwashing.

Razer spent part of her time with the MERCs in a relationship with Deathtrap. This frustrated her to no end given his cold fish nature and complete lack of empathy toward his team and her. She apparently wanted it to be a romantic relationship, and Deathtrap was only interested in the sex.

Razer later started a relationship with MERCs ally Flashpoint, since he was apparently more receptive to her needs.

During the Fire from Heaven events in Gamorra, things went badly for Razer. Flashpoint went nuts and had to be killed by Battalion. Deathtrap’s irrational behaviour got him and Razer gunned down with less-than-lethal ammunition after they were surrounded.

Fall of the MERCs

The MERCs eventually got free and continued to operate as, well, mercs. They even recruited a pair of unidentified female fighters, but they were operating on borrowed time as their leader Deathtrap was increasingly depressed.

Deathtrap eventually gave up as he was hit by a mid-life crisis. Considering him to be liability who knew too much about his operations, Kaizen Gamorra had Razer assemble a new team of MERCs to kill him.

Razer picked Hellslayer plus three newcomers — Quarrel, plus Bedlam and Lipstick — and a number of zombots. She was apparently partly motivated by a desire to punish Deathtrap for having never loved her.

Hellstrike was coincidentally at Deathtrap’s place to kill him. He ended up saving his life, allowing Deathtrap to get the drop on Razer. To everybody’s surprise he was unable to take the shot. The confused Razer thus flew away with her life. 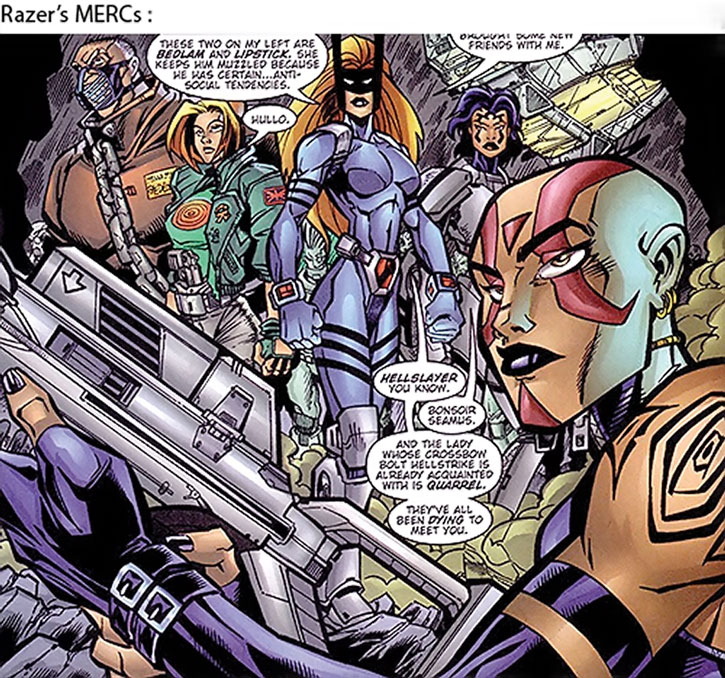 Razer was not seen again in a long while. Whether she operated with her new MERCs, with the old MERCs, solo, or with another group is unrevealed.

She resurfaced in 2008, when Tao blackmailed her into becoming one of his enforcers, along with Helmut and the Quickness. Tao was, at that point, stockpiling enormous amounts of Super-Powered Beings for his master plan, using suspended animation facilities.

Though Razer was taken out by Union and Black Halo (formerly Omni), she served her purpose in Tao’s plan, which eventually resulted in Armageddon.

Razer survived the Armageddon, and was spotted in the ruins of London. She had been there on a job with two other MERCs (Hellslayer and Brutus) when the apocalyptic events took place, which may well have saved the MERCs’s life. Her endeavours since are unrevealed.

Razer was originally portrayed with one of the Southern US accent (much like Rogue), but that kinda disappeared.

She has been known to wear her hair very long, nearly to the ankles. Presumably she uses her flight power on her hair so they’re not a hindrance. At one point she’s called an “anorexic witch”, so she might be on the thin side.

Razer is definitely greedy, and a killer. But she never was quite as evil as the rest of the MERCs and seems to care for her colleagues. Still, like the others, she had little problem working for the likes of the Cabal or Kaizen Gamorra.

“Well… if it isn’t Stormwatch ! Hope we didn’t crash your little party ?”

* Without Defensive Roll
** Only whilst in flight 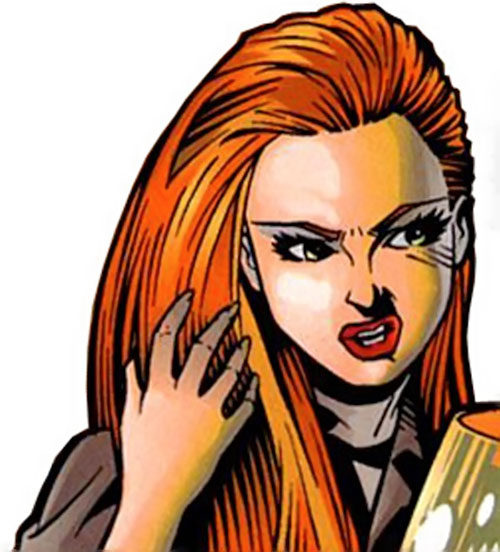 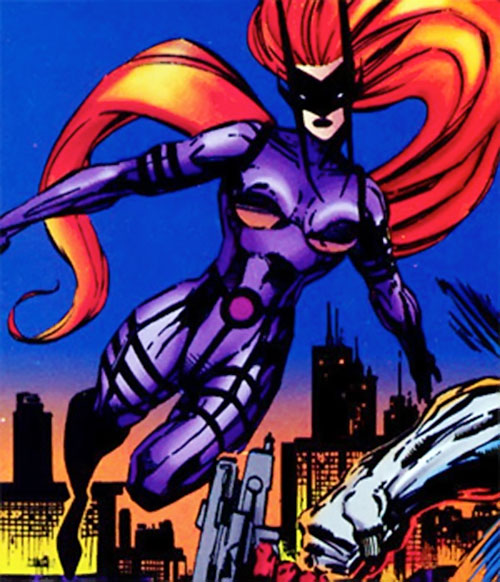