We have a small, entirely off-topic series of articles about PC workspace and gaming space ergonomics accessibility.

This article is among this tiny lot. Might have been the first one, I think.

They prolly don’t emerge much on search engines (the writeups.org domain isn’t authoritative on this subject) but heh, if it ends up helping even one person…

To us older people, the Tartarus is the modern equivalent of the Belkin Nostromo. It is a one-handed PC mini-keyboard plus a number of under-the-thumb buttons, and it can be extensively programmed.

It is primarily intended for video games where one presses many different buttons as well as using a mouse. Programmable keys are also the bee’s knees in coding and some other tasks, but a keyboard with macro keys is prolly a better choice for these.

The main alternative to the Tartarus was the “MMO mice”. These are big mice with an array of buttons under the thumb. Though I suppose you can use both in games where you need to press a gazillion buttons PDQ.

This article is a short review of the Tartarus device, with a concrete example of use. So you can see it an action, so to speak.

I’m also the sort of person who extensively researches what sort of gear they buy. If you’re not like that, you’ll benefit from listening to people like me. 😺

I’ve got health issues with nerve damage and stuff, so I often can’t quite feel/locate my hands. Therefore, the ability to keep my fingers on buttons with very little movement is a genuine asset.

But it can be used in more common situations. Such as :

I chiefly use my Tartarus in AARPGs — Diablo-likes. Currently it’s Grim Dawn, which I’ll use as an example here.

Obviously, any game that uses action bars (such as World of Warcraft) and has decent keybinding options can use a similar setup.

Since folks occasionally ask, the input devices I use :

Here we are discussing the Razer Tartarus v2 Chroma. It is an evolution over the V1, though the V1 had mechanical keys some might prefer.

Its first, readily visible characteristic is that it’s too expensive. It’s about $80 as of this writing.

Still, it’s worth it to me to avoid irritating fumbling – and pain issues. I’d imagine part of the price is because it’s built in small quantities, being such a niche product.

There are 19 keys on the mini-keyboard. In the thumb area you’ve got :

There’s also a cushion and palm rest, both of sufficient quality (though I’ve seen complains about the glue holding the cushion).

Hardware quality seems decent, which is good given that previous keyboard-ruining misadventure of mine. It’s an USB peripheral. I think it supports several user profiles, but I haven’t used that yet.

It is clearly intended to be used with the left hand whilst the right handles the mouse.

The 20 keys (the 19 main ones and the “thumb pedal”) have RGB lighting functions. I’m not a fan of RGB gamer crap, but here it is genuinely useful.

The core use is to light the keys in different colours. So for instance I’ve rigged the #9 key to be violetish-blue, and the #10 key to be magenta, whereas the #17 and #18 keys slowly cycle from yellow to red.

This makes it much easier to remember what does what. For instance if you haven’t played in a while, have been playing different games, are alternating between characters with different control schemes, etc..

The software to set up the lighting is a smidgen abstruse. But after a few minutes of cursing I could do the basics I needed.

There’s also significant light bleed between the keys so it looks prettier. But looking closely will make it clear which key is glowing by itself, and which key is lit by its neighbour(s).

This example should be comprehensible by anyone, even without Grim Dawn familiarity.

Here’s how my pad looks, with the curtains drawn so daylight doesn’t wash out the colours on the photograph. #17 and #18 cycle between yellow and red-orange. 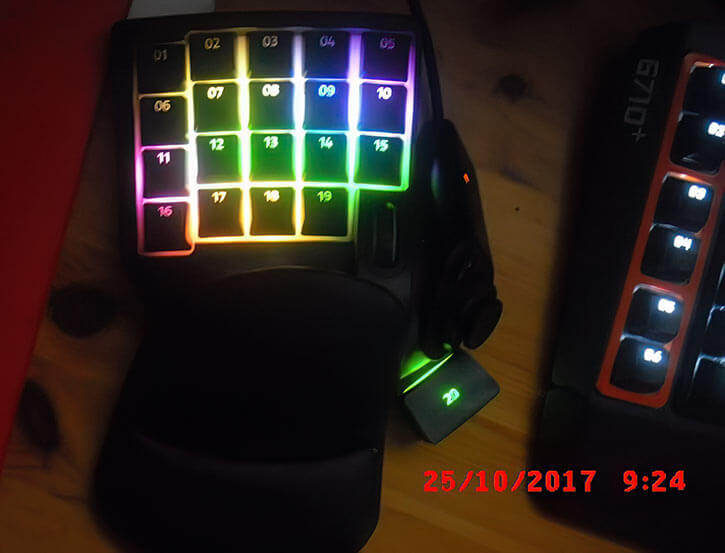 Yes it’s bit grainy, even after a helpful pass with a NN denoising filter, but if my hands didn’t tremble I wouldn’t have a Tartarus. Right ?

This is an addition to the mouse. Though on said mouse I only use left click, right click, and a thumb button for rarely-used “oops” abilities.

The #20 “thumb pedal” is mapped to ability #10, which is the health potion on all of my characters’ action bar. So this emergency key is the same for all chars, and slamming the thumb down is intuitive enough as an emergency button.
Grim Dawn also has a bindable health pot key, but having the pot on the action bar allows for seeing its cooldown timer.

Key #11 is the “attack without moving” one for ranged attack characters, placed under the pinky to avoid excessive pressure. It is pink so it stands out, and because “pinky”, see ?

Keys #8, #9, #10 are the utility keys. Yellow means “map”, blue-violet means “switch” (in this case, switching weapons). I have to move up my fingers to press these, but weapon switches aren’t frequent, and recurrent map access is usually done outside of combat. Being able to bring up and down the map with just a fingertip move is nice for some hard-to-navigate, low-visibility areas.

#10 is the “loot a nearby thing” key (assigned from the keybinding options in Grim Dawn). This is used when there’s a lot of loot, so I don’t have to go click-click-click with my bad hands. The magenta colour is reminiscent of the pink of key #11, since these are things you do without moving.

#12-15 and the under-the-thumb mushroom button are the main action keys. Except for the thumb mushroom, they’re lit in green. I simply mapped them to the 1-5 keys on the keyboard. #15 is seldom used since I’d need to move my fingers too much – the thumb mushroom is easier to use.

So at this point I have seven in-combat actions without moving me fingers and losing track. Left mouse, right mouse, #12 green, #13 green, #14 green, thumb mushroom, thumb pedal. That goes to nine (#15 and mouse button 4) with “oh crap” abilities that aren’t routinely used. Plus the attack-without-moving key for ranged attackers, and an easily-found map.

Obviously, I avoid character builds with a full action bar. That’s too many buttons for me damaged hands to handle. But with the Tartarus I’ve given it a shot.

I mapped the additional slots on the action bar to the thumb joystick as up, down, left, right. I was sceptical, but it works out okay for a pets-summoning character. As with most summoners, she needs action bar buttons to resummon slain pets.

Having all her lil’ friends on the thumb pad (skeletons are “up”, crow is “down”, blight monster is “right”, hellhound is “left”) allows for fairly smooth resummons. I do occasionally mess up and resummon the wrong one, but the character isn’t mana-constrained so it doesn’t manner. 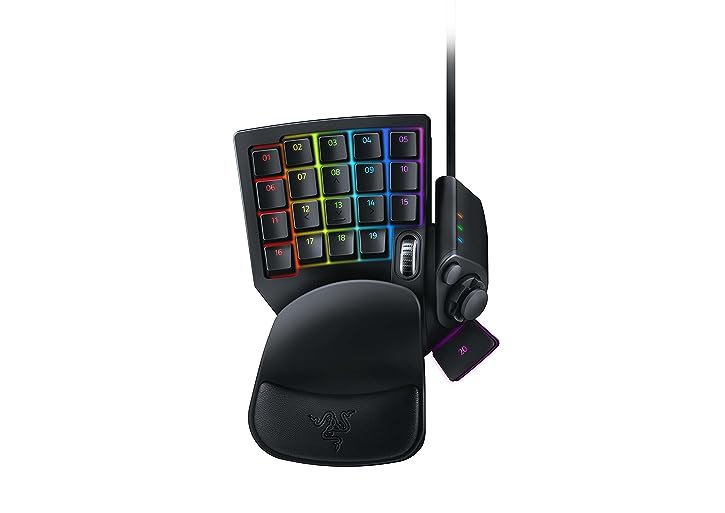 Here’s a cleaner, commercial photo for those who revile trembling hands shots. Though of course it doesn’t have my colour scheme.

My Grim Dawn main is a 2H lightning warder.

It’s a slightly-under-top-tier build, so keeping her alive in bad circumstances requires more button-mashing than I anticipated when I levelled her up. And mashing multiple buttons with different cooldowns isn’t my strong suit. Let’s just say I’ll never be a drummer.

So I programmed macros on #17 and #18. These have a different colour and a discreet animation to mark their status as more “active” keys.

#17 is the head-bashing key. It presses 1 for 0.3 seconds, waits for 0.3s, presses 2 for 0.3s… In practice, pressing #17 means that within 0.9 seconds I’ll deliver a Primal Strike (big attack with a 3 seconds cooldown), then a Chain Lightning attack (smaller attack, no cooldown), then press “pet attack” so this character’s pet focuses on the current target.
Thus, this is manually pressed every three seconds in a brawl, the advantage being that I also get a minor chain lightning attack and avoids my pet wandering away to pick daisies.

#18 is the saying-hello key. Using similar 0.3 seconds delays it drops a Wendigo totem, then a Wendigo-enhanced thorny vines ground effect, then summons a short-lived pet, then issues a “pet attack” command.
This is a sequence I’m going to do whenever I engage a significant enemy. Since the character needs to be supported by good life drain, debuffs and DOTs to operate. Having them all deployed with one key press avoids stressful fumbling with my bad hands, which means I feel more relaxed when playing.
It wastes a bit of mana since it means unnecessary recasts of the longer-lived effects, but nothing severe. If it becomes an issue I could also program the #19 key and have fewer things on the #18 key.

I edited these macros, but as usual the core thing is to click “record”, press the keys you want and click “stop recording”. They can also loop, but that’s not useful here.

The Tartarus performed well for more more than a year. However, in late 2019 I started experienced software issues. As far as I can tell :

Mind, if you already are using multiple Razer peripherals, you’re stuck with Synapse. So adding a Tartarus won’t change anything.

(Later edit – perhaps a hooks conflict with Reshade and/or Nvidia’s implementation of Reshade ? Or perhaps one of those cases where Windows shits the bed when managing non-trivial USB peripherals – the modern equivalent of an IRQ conflict.)

There are a number of obscure brand knock-offs that shiftily roam around on Amazon. I prefer to steer clear of those.

On the other hand, that leaves us — TMK — with but three serious alternatives :

This article has a companion article of sorts. It’s about using voice commands in PC game, through free software and a light microphone. This too helps a lot of you can’t handle a bunch of keys and/or controllers.