Young was a massive, powerful fighter. Both of his hands were replaced by large, heavy blades that could slash or thrust through solid stone. Razor-Fist could hack through or impale a statue.

While he was martially quite proficient, Razor-Fist was out of his depth against the Master of Kung-Fu. It seemed that he had never fought an opponent even deadlier than himself before.

The first Razor-Fist (who is not kin to the latter 2, despite the rumour) was first seen as a bodyguard and enforcer for the feared drug lord Carlton Velcro.

Living in Velcro’s palace, Razor-Fist was at once a killer, a security officer and in charge of intimidating visitors. He often demonstrated his ability to cleave through solid stone as Velcro explained to visitors that he did not guarantee their safety if they were not loyal allies.

Another noteworthy mercenary employed by Velcro was Pavane. She handled the black panthers prowling the palace’s grounds.

In 1985, Sir Dennis Nayland-Smith was tasked with bringing Velcro down – since conventional police forces could not touch him. Thus did Shang-Chi, the Master of Kung-Fu and Nayland-Smith’s star agent, run into Razor-Fist while invading Velcro’s heavily-defended palace.

Though skilled, Razor-Fist proved not to be a match for the Master of Kung-FU. Shang-Chi snapped off one of his blades (using his steel bracers) then duped him into embedding the other into a wall. Razor-Fist pulled it free, but was again manoeuvred into impaling a statue, and Shang-Chi knocked him out. 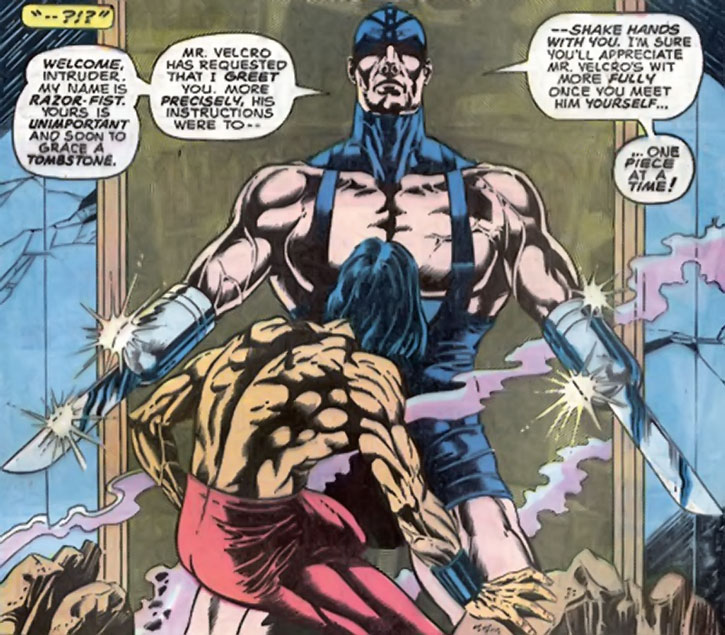 Razor-Fist eventually recovered and found Shang-Chi again. As he was preparing to engage him, Velcro and armed guards burst in. Not caring in the least that his loyal henchman was in the line of fire, Velcro ordered his men to open fire.

Though the guards missed the agile Master of Kung-Fu, the surprised Razor-Fist was cut down by automatic fire. He soon died from his wounds.

During the clash of the assembled heroes of the DC and Marvel Universes against Krona, a Razor-Fist who may have been the William Young was among the assembled villains and mercenaries defending Krona.

Furthermore, it is possible that the official Marvel identification of which Razor-Fist is which in each story is incorrect. If so, then Razor-Fist I did survive and appear anew. See the entry for Razor-Fist (Douglas Scott) for further discussion of this.

A loyal, stone-faced mercenary of few words. He likes to hurl the occasional tough-guy threat and to act real confident and unstoppable.

Some of his lines sounded scripted, probably at Velcro’s request.

“Welcome, intruder. My name’s Razor-Fist. Yours is unimportant and soon to grace a tombstone. Mr. Velcro has requested that I greet you. More precisely, his instructions were to shake hands with you. I’m sure you’ll appreciate Mr. Velcro’s wit more fully once you meet him yourself… one piece at a time !”

“My name is Razor-Fist. Know that I shall spit upon your blood.”

“You are swift. My mouth waters.”

Razor-Fist I officially appeared but once, so his stats are somewhat speculative.

* Without Defensive Roll
** Without Bladed attachments 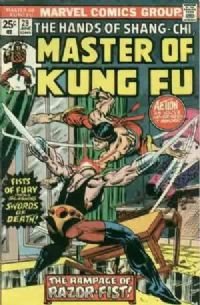 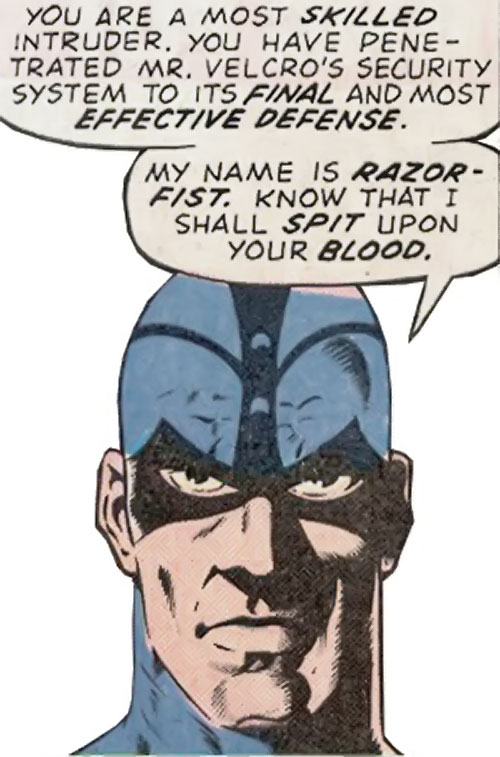