Razorback is a HUGE man, who was born a mutant. He possesses the ability to drive or pilot any vehicle.

He is a formidable hand to hand combatant, holding his own with the likes of Spider-Man (Peter Parker).

Buford Hollis was a ace truck driver, and CB radio  aficionado. Hollis used his talent for inventing to become a costumed crimefighter like the ones in New York City. Since his home town of Texarkana was in “hog country,” Hollis designed his costume to make himself look like a ferocious boar and called himself Razorback.

After several semi-successful adventures in which he met Spider-Man, he was seen aiding a friend in the hijacking of NASA’s new spacecraft the Star Blazer. This was part of an attempt an attempt to find Ulysses Solomon Archer.

During the shuttle-napping he picked up a reluctant passenger in the form of one She-Hulk (Jen Walters). After ending a nefarious plot by Xemnu the Titan at the stellar truck stop Star Stop, She-Hulk contacted NASA and spoke on Hollis’ behalf.

When last seen, Razorback was piloting the Star Blazer (which he renamed the Big Pig III) further into space with his new love Taryn O’Connell.

Razorback is a goliath of a man.

He wears a green costume with yellow gloves, boots and utility belt. He wears, uhhh, a big pig head as headgear.

Razorback is a stereotypical trucker, who enjoys his life as a costumed hero.

At first Buford appears to be a buffoon – but has proved himself to be a competent crimefighter.

Razorback’s adventurous spirit can take him anywhere. Since DC is rich with space faring characters and alien races, adding Razorback into the mix is relatively simple.

On Earth Razorback could be found ’on the road‘ aiding heroes wherever he finds them. 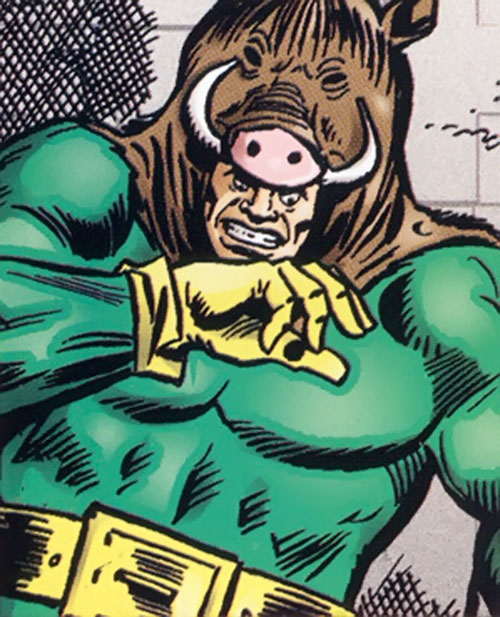