According to Supergirl’s supersenses, “his body acts like a living, breathing nuclear reactor — producing radiation he can direct by means of control rods on his wrists and chest !”. In practice he can :

Reactron will also, under some circumstances, blow up like a small A-bomb.

One of his main abilities might be to induce Power Complication subplots in others. What he radiates is, after all, funky comic book radiation. Radiation poisoning (in DC Heroes RPG terms Poison touch with a slow frequency) is a more realistic alternative, but we’re talking about a pre-Crisis Supergirl villain here, guys.

A career soldier, Sgt. Krullen apparently missed World War II. He enlisted in the 1950s, and was one of the US soldiers who were exposed to A-bomb radiation during the various tests which were conducted back then.

This slightly mutated Krullen, but with little apparent effect. He now could withstand energy attacks a bit better, but those aren’t exactly daily occurrence. He have seen his aging slowed down, but it’s not clear.

Sgt. Krullen met Joshuah Clay in Việt Nam. Krullen had enlisted, but Clay was a draftee. They didn’t get along at all, and in fact probably wanted to kill each other more than they wanted to kill Việt Cong insurgents.

This hatred crystallised when Krullen decided to single-handedly assault a village. He maintained he could “smell commies”. Meanwhile Clay argued there were only old women and children in there.

Krullen charged in. The angry Clay manifested his mutant power for the first time, unwittingly blasting Krullen in the back. Surviving the blasts due to his powers, Krullen opened fire on Clay as soon as he recovered. Clay melted Krullen’s rifle – then ran away and deserted. Joshuah came back to the US through his own means.

When Krullen’s tour in Việt Nam was over, he drifted from job to job. But in the late 1970s he approached the criminal Council to see how his still-latent power could be tapped to turn him into a powerful superhuman, like Clay. The Council eventually succeeded at turning him into Reactron, and he started working as an unstoppable agent for them.

In the early 1980s, the Doom Patrol (then composed of Robotman, the Negative Woman, Arani and Tempest – the unmasked Joshuah Clay) clashed with Reactron. This battle was fuelled by the hatred between Clay and Krullen. For weeks, the Patrol attempted to stop Reactron.

Although they were more numerous and had more experience, Reactron was pretty powerful. Krullen also could teleport away if needed, making it very difficult to stop him. Still, the Patrol didn’t give up and confronted him in Chicago, where Supergirl recently had moved.

Supergirl started working along with the Patrol to stop Reactron, but also found the villain hard to stop. They couldn’t prevent him from stepping into an experimental reactor in Chicago and absorbing a large dose of radiation.

However, Supergirl used her superflight to catch Krullen in a wind funnel. It blew him upward while preventing him from shedding radiation. Reactron then exploded for the second time in their encounter, and was too exhausted to come back. The exposure to exotic radiation, however, triggered a Power Complication Subplot in Supergirl.

(His fights with Supergirl were explicitly retconned as having been against Power Girl after the Crisis).

Under unrevealed circumstances, Reactron was arrested and thrown into the Belle Reve prison. From one account, one assumes that he collapsed after his defeat at the hands of Power Girl/Supergirl and was easy picking for the authorities.

Some time later, he was visited by Larry Trainor, who used his military and Doom Patrol credentials to see him. Although Trainor kept saying that he was looking for a cure for his condition, his actual plan was far darker – revenge. For him, Reactron was the best way to steal back the negative energy being from Col. Valentina Vostok and make it his again.

Trainor slapped a gadget on Reactron’s control rods that would allow him to detonate them. He then made a deal with the thug. Krullen would, without hurting anyone, absorb the negative energy being from Vostok and radiate it back into Trainor, then go free.

Reactron did manage to absorb the negative energy entity, but got in a brief fight with Josh Clay on the way out. Clay burst one of his control rods.

When he got back to Trainor, Reactron was overloading from the negative energy due to his busted control rod, and exploded.

Although Trainor was unable to locate Reactron, he regained control of the negative energy being for a while. He then used it to destroy powerful missiles launched at Earth by Garguax. However, Vostok regained control of the negative energy entity within days. This had the unforeseen side-effect of curing Trainor and making him normal-looking. At least, until the creation of Rebis.

Reactron survived the explosion and was recaptured by the authorities. He next was assigned as a member of one of Task Force Omega’s “Suicide Squads”, along with Deadshot, Major Disaster, Killer Frost, and Blackstarr.

They were sent to investigate the island of Kooeykooeykooey, where a city full of powerful metahumans had suddenly appeared. Reactron made the mistake of infuriating Killer Frost, and was frozen in a solid block of ice.

When the metahumans appeared before them, Deadshot went wild and started shooting everything, leaving several large holes in Reactron’s body. As the villain died, his body began to reach critical mass. He was close to exploding and causing a major international incident, until it was removed to another dimension by Blackstarr.

See illustrations, which are in chronological order.

Reactron is a former soldier, and behaves in a crude and aggressive fashion. He has basic discipline and tactical acumen, but also has a temper and tends to cast subtlety aside when he’s angry, fighting with raw power until the problem goes away.

Despite his anger, he knows when to withdraw, and usually keeps enough Hero Points  for an emergency teleportation.

But generally, he’s a brutal thug with a talent for grudges and a desire for mayhem.

“You freaks never give up, do ya ? If that’s the way it’s gotta be, then I’m game — but before I blast ya to scattered neutrinos, yer gonna know ya was smashed by… REACTRON, THE LIVING REACTOR !”

“That’s what ya get fer stickin’ yer nose in where it don’t belong ! ’least I left enough of ya fer yer family to bury ! Ha !”

“Quit bein’ so righteous, Supergirl ! It ain’t the way to spend the last couple’a minutes you got to live !”

Equipment:
CONTROL RODS [BODY 08. These control rods around his chest and wrists allow him to control his nuclear reaction – without them he enters a Power Complication Subplot and cannot use any of his Powers].

In his post-Crisis appearance drawn by Eric Larsen, Reactron was far bigger and bulkier than in his Supergirl appearances.This had the unfortunate side effect of making him even more like his Marvel Universe predecessor, the Radioactive Man.

This can either be treated as artistic licence, or by having Reactron acquire an AP of Growth – which would be Always On, but not factored in the stats above.

The Height, Weight, etc. given here are for Krullen’s human form. In Reactron form, it is hard to have an estimate, since even in his Supergirl appearance his overall height and bulk seemed to vary (from 5’11” to about 6’5”, and from about 220 lbs to 300 lbs or so). Perhaps he is *supposed* to grow and shrink as per the energy he has ?

In his last appearance, Reactron has his normal human size. 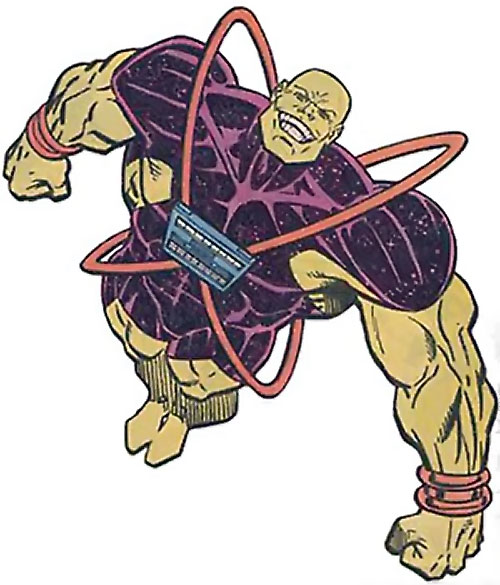 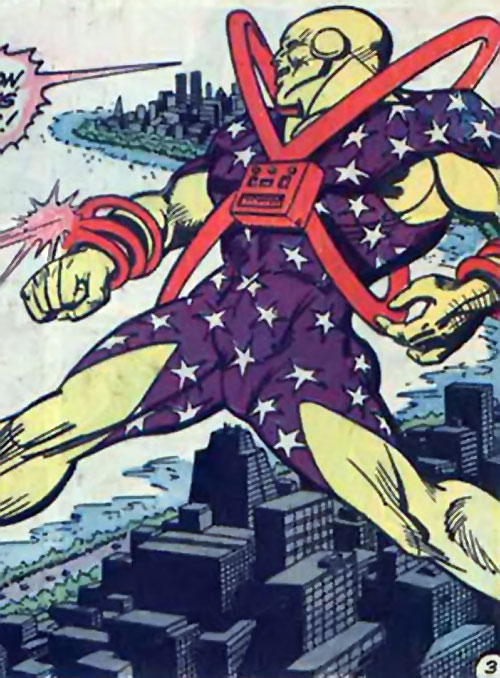 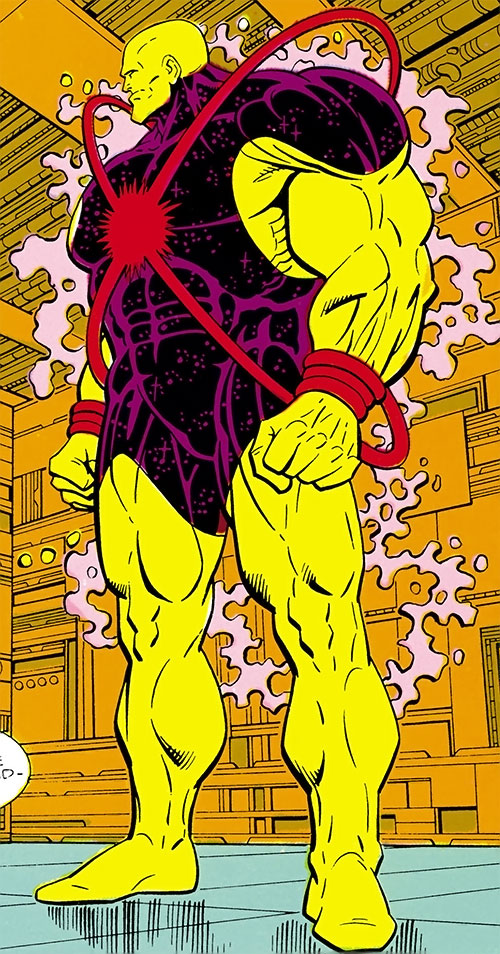