Rebel was born on Golden City. When his powers appeared naturally was made a part of that city’s defence cadre, the Agents of Change.

Rebel became quite popular due to excellent PR work. This angered Titan, who more or less consciously wanted all the popularity and heroic image for him. 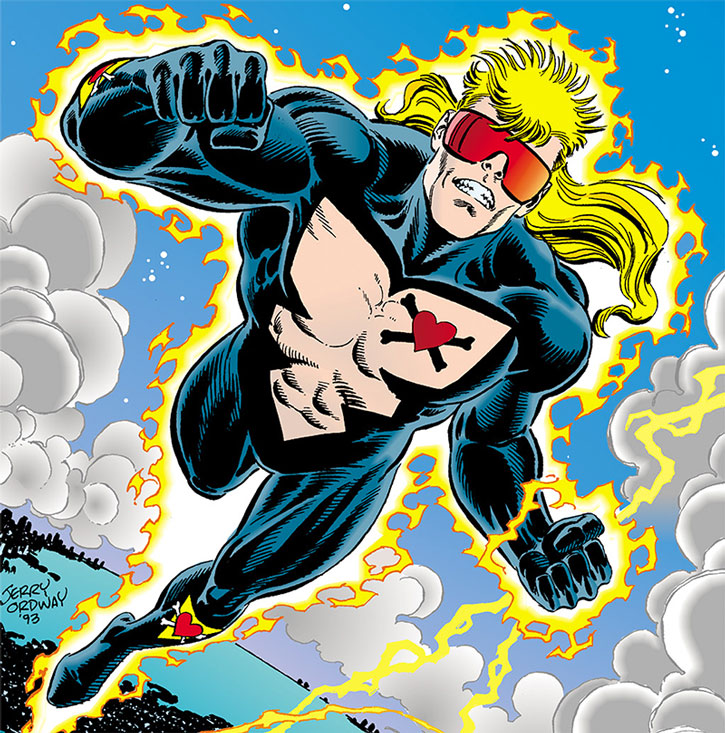 Matt started to get a bit irrational after Rhapsody died due to Titan’s recklessness. He prolonged the duration of his periods as Rebel in a subconscious attempt to punish himself for the death. Matt later snapped and assaulted Titan, who beat him. Shortly after that, Titan left Golden City.

During the reign of Law, brother fought brother. The distraught Mark supported Law, and the more cool-headed Matt did not. Their relations became so explosive that Mark KOed Matt and thought he had fried him with his powers.

Law’s people nearly finished Matt so Mark would think that he had really killed his brother.Instead, they offered him an inhuman alternative to death by overloading – using the comatose body of the brother he thought he had killed as a receptacle for uploading and downloading the Rebel power.

His fate after Law died is unknown.

Rebel is always surrounded with a yellow glow.

The “Rebel” name is just an empty, cool-sounding name in order to increase popularity with teenagers. 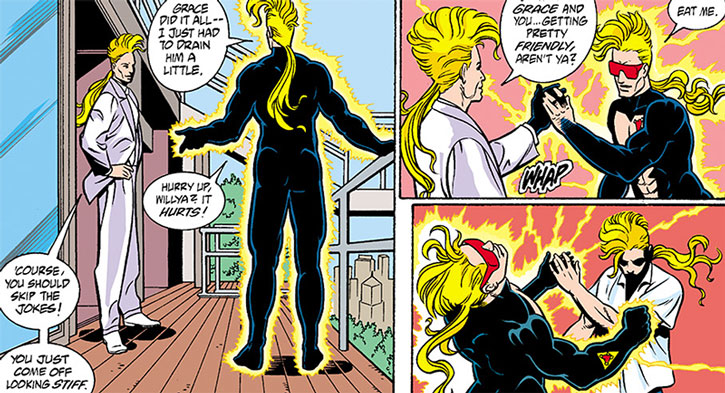 Matt is more serious than Mark (who he sometimes call “the comedian”). Matt wants to become a lawyer and have a life despite the time constraints brought by the Rebel powers. Mark just enjoys himself and thinks Matt is a bit stiff. Both seem to be about 21.

Rebel does not handle stress well. Especially if the pain from lack of passing the powers to his twin start to mess him up. He’ll not crack too easily, but he’s liable to make mistakes due to stress. Grace is also very important to him, and he has a hard time living without her guidance.

“Hey, dude ! Are you a threat ? Wanna take me on ? Hear those cheers ? Wouldn’t want to disappoint them, would we ?”

Golden City is an interesting theme, and it and its super beings would make an interesting scenario for a JLA adventure. You could also Amalgamate  it and the city created by the Ultramarines.

Advantages:
Insta-change (whenever the Rebel powers are transmitted from one twin to another), Local Hero (Golden City), Medium Security Clearance (Golden City).

Drawbacks:
Involuntary Alter-Ego (the Rebel powers will start to hurt after about 12 hours ; any two hour beyond that will inflict 1 RAP of Killing Physical damage. They can be switched from one twin to another by simple physical contact), Secret ID.