The Red Guardian is an identity that has been used by a series of Soviet, then Russian super-heroes.

Aleksey Lebedev is thought to have been the man who created this tradition, during the Great Patriotic War.

There is precious little material about this guy. But gathering what data exists about the birth of a flagship costumed identity in a major country sounded useful.

Though there is not much material about him, the stock Golden AgeSuper-hero comics from the late 1930s to the early 1950s. greater-than-life hero stats are probably close enough for tractor-building factory work. 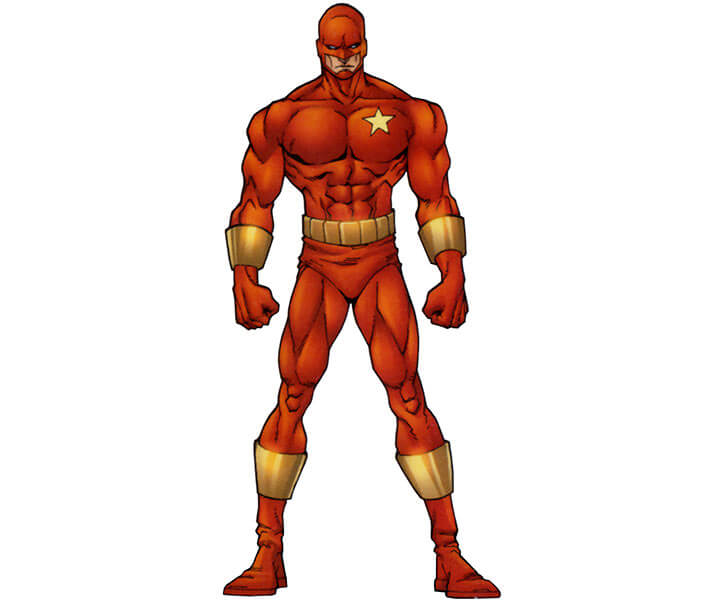 Aleksey Lebedev was a heroic, muscular, square-jawed worker wearing factory coveralls. What else for a hero of the Soviet Union ?

In 1939, he rescued a woman and her child from a burning building during a shelling. To ward off the flames, he covered himself and the child in the red flag, presumably soaked in water to protect them both.

This patriotic feat of heroism made a huge impression on nearby workers and soldiers. Furthermore, the kid was the child of an important Red Army official. The Guardian was thus made into a hero and symbol by Stalin  .

Furthermore, he received a costume inspired by both other allied super-heroes – and the flag he wore during his exploit.

This took place in 1941, after Barbarossa and Captain America’s debut.

Secondary sources  mention that Lebedev was enlisted in a special training program to create a super-agent. It reportedly was inspired by similar attempts in other countries – such as Weapon Plus.

During the war, our hero had his entire family massacred by Schutzstaffel troops  . This resulted in a vendetta between the Guardian and the SS that lasted to the bitter end.

Reportedly the massacre occurred after the SS discovered Red Guardian’s real name. Afterwards, the Soviet government gave Lebedev a new name as part of a program to protect his relatives.

The Red Guardian is known to have worked with Captain America (Steve Rogers) at least once before 1945. They seemed to get along pretty well. All that is know about this encounter is that it wasn’t in Stalingrad. 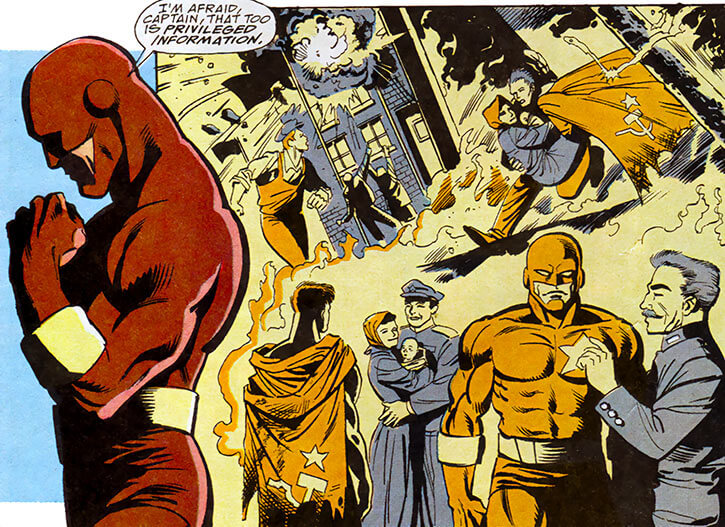 He was to recover a mysterious strongbox left by Hitler to the Red Skull. The content of the box was to be used to gain revenge on the Allies if even the Sleepers were to fail.

Through planning or happenstance, he joined forces with three American heroes :

Yet they couldn’t recover the strongbox or capture the Red Skull.

An US air raid made the bunker they were all in collapse, trapping the Red Skull and the box while the three heroes narrowly escaped. The Skull, though a freak happenstance involving experimental gases, would enter suspended animation at that point.

At Yalta  , the first Red Guardian was part of a special security detachment along with Namor and Captain America (William Nasland).

Although Nasland was antagonistic and abrasive toward his Red counterpart, all three narrowly saved the signatories from a Nazi scientist. The Guardian personally rescued Stalin.

In September of 1946 the Red Guardian led a group of Soviet operatives about which little is known :

They entered the UK to exfiltrate an atomic scientist reportedly selling secrets to the Soviets. However, they were thwarted by the All-Winners Squad.

During the fray, the observant Red Guardian became sure that Captain America was not the man he knew during the war.

Lebedev presumably died during the 1950s.

One report states that he was executed for opposing the experiments that created his successor, Alexei Shostakov.

The first Red Guardian comes across as a swashbuckling, light-hearted adventurer. While he’s serious about his patriotic duty, he’s a nice chap who prefers to get along with everybody.

The 1946 fight in the UK evidenced that he was an observant, clever fellow. He was quite capable of subtlety when needed.

“It is an honour, Captain. How goes the war in the Pacific, comrades ?”

(After having made a German prisoner so drunk with vodka that he talked) “You see, the Russian way works every time.”

“Do not fear, Americans ! I won’t bite you. I am called the Red Guardian ! Premier Stalin sent me — to locate Adolf Hitler’s strongbox.” 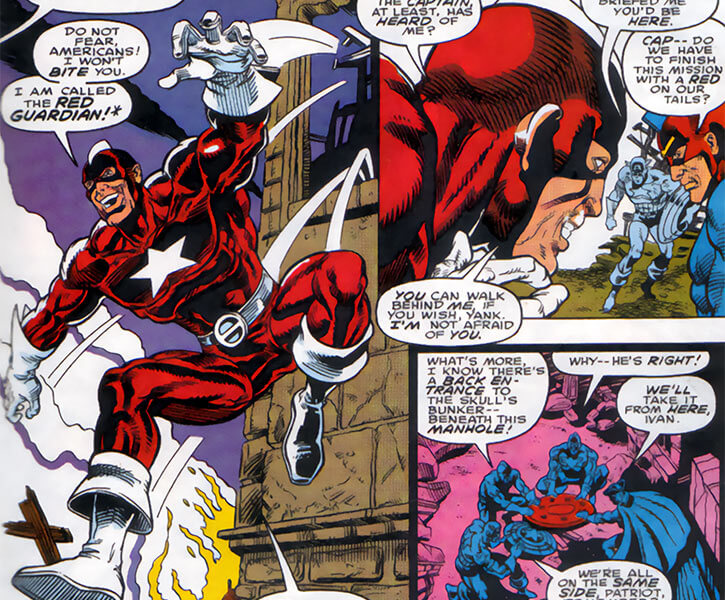 If you liked the James Robinson’s Golden Age, the Guardian could have helped Manhunter flee from Germany after becoming amnesiac. He would have kept him away from the NKVD and sent him to America as soon as he could.

Starting to disapprove of Stalin’s policies after the war, the Guardian was purged, using the hated Stalnoivolk as the executioner. His death was faked as an heroic sacrifice for the Rodina in a secret mission.

Trying to maintain his legacy alive, a series of men have assumed the identity. The last of them was Leonid Konstantinovitch Kovar, aka Red Star. 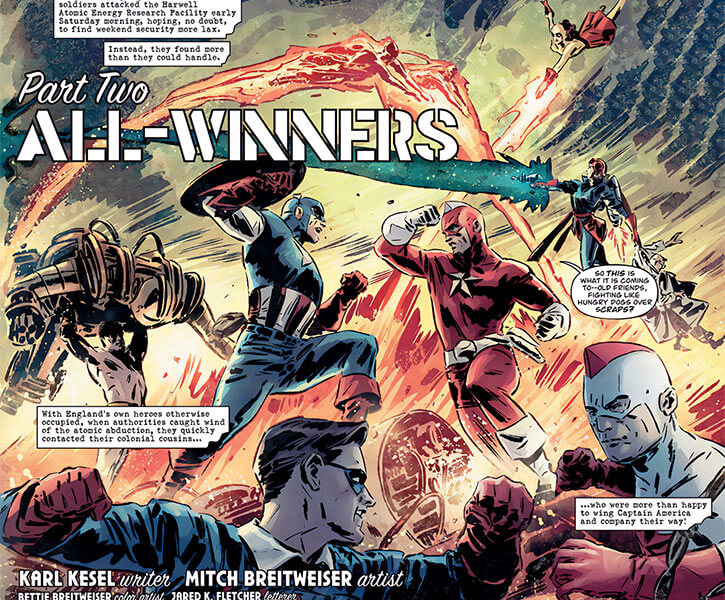 Secret Identity, MIA toward Patriotism, SIH of the SS.