Having alien technology implanted in him has given Red Guardian superhuman strength and resistance to damage. Thus, he’s able to withstand gunfire from multiple automatic rifles with no apparent effect.

The Russian scientists who changed him could not replicate the shield of Captain America, whom he was modelled after. So Red Guardian made his own. It has human skins stretched over the front of it and a sharp edge, which he uses as a weapon. It is attached to his left arm, so removing it requires ripping it out of his arm.

All the inmates of the complex had radio devices implanted in them. These will detonate nuclear land mines, destroying the area, if they leave the complex.

In 1904 an alien spacecraft crashed in the Tunguska  region of Russia. When the Russians investigated, in 1927, they recovered an injured biomechanical being from inside the wreck. They set up a scientific research facility to study it.

Following the Second World War, the Russian government felt the need to produce super-soldiers to keep up with the, by then missing, Captain America.

Their scientists began removing parts of the alien biomechanoid, and surgically implanting them in human guinea pigs. Over the decades of doing this, most subjects went insane due to the stress of the changes, and degenerated to a feral state.

But a few, such as Red Guardian, retained a level of sanity and ability to communicate. He quickly rose to the top of the pecking order amongst the mutates, and saw himself as Russia’s version of Captain America.

After the fall of the soviet government, the staff at the facility were no longer getting paid. So they sealed the complex and abandoned it, leaving their creations inside. With his body no longer being cannibalized, the alien biomechanoid could repair himself enough to send out a global broadcast, warning of a threat to the planet.

S.H.I.E.L.D. tracked the signal to the complex. They sent a small team to investigate, including Nick Fury, Black Widow, Sam Wilson (Falcon), and the returned Captain America.

His costume is a patchwork affair, parts of which don’t quite fit and are stretched across him. His cap is split on top, revealing his short, badly cut, blond hair, and the goggles are smashed. His bloodied teeth have been filed to make them sharper.

Red Guardian sees himself as the Russian national hero, a counterpart to Captain America. As such, he behaves in what he considers an honourable and patriotic manner.

However, the trauma of the surgeries performed on him, and his isolation have severely damaged his mind. Furthermore he has been living for decades amongst the other mutates who have lost their humanity. This has required him to be brutal and savage in dealing with them. Howbeit, he can still converse with others in a sensible manner.

“Finally. They said to me, the good workers of this place, they said we make you great. We make you great because one day you meet Captain America. The Americans build super-captains of the battlefield, and one day. And so I have waited. And guarded the means of production like a good worker. And so you have come to me. I always knew you would. I have considered our fight for many decades. There is music in this. Do you understand, Captain ? Great music.”

“You. I have not the English for what you are. I will kill you now.” (Captain America has just broken his shield and thus his left arm too)

“Do you understand what this was, this underground place ? It was our testing ground. It made us strong. It made us glorious. It made us proud. It taught us that Americans are nothing and that there is strength in a union. It took a union to make me.”

The Red Guardian is the product of a Russian scientific experiment resulting from Soviet agents acquiring genetic samples of The Guardian (Jim Harper). These were apparently conducive to experimentation, having resulted in a number of clones. They also served as the basis of the Cadmus superhuman Auron, and the evil Guardian clone who worked for the Agenda. 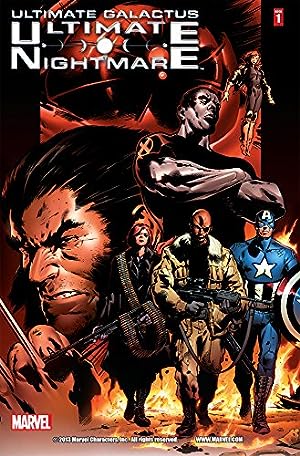 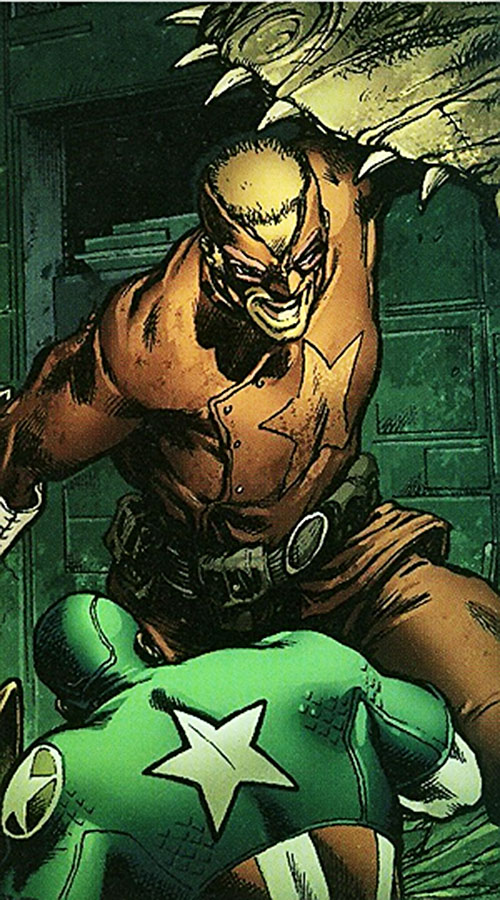