“With blood and rage of crimson red,
Ripped from a corpse so freshly dead,
Together with our hellish hate,
We’ll burn you all,
That is your fate !”

This profile is for a generic Red Lantern Power Ring, representing the emotion of rage.

Red Power Rings are drawn to those experiencing overwhelming rage at a wrong done them.

When they bond with a wearer, the individual’s blood is roughly expelled and replaced with a napalm-like plasma. The ring also replaces their heart’s function, so that even having their heart torn out won’t kill a Red Lantern.

The individual is at this time bonded to the ring for life. Forcibly removing the ring will kill them. They can only be cured by a Blue Lantern, or by a Star Sapphire using their link to someone who loves them.

Their new blood can be vomited forth as a liquid which burns through any substance. Even through Power Ring force constructs, and even in space.

Most of the Rings’ abilities are used only in fairly straightforward ways. These don’t require much thought. Even complex operations like breaking into hyperspace where a space station is hiding is achieved by hitting space until it tears and lets them through (and no, Superboy Prime didn’t have a Red Lantern Ring, shut up).

Red Power Rings are capable of creating force constructs. Howbeit, the concentration required for this is not offered by the rage the Rings ignite. Wielders of other colour Rings who are familiar with force constructs can do so without needing to think, but even Atrocitus has only begun to use them.

As well as offering protection to the wearer, the Red aura surrounding them seems to enhance the damage they can cause in unarmed attacks. If not attacking by spewing napalm they’ll often physically attack their enemies, either punching and kicking or using whatever natural weaponry they possess.

Red Rings have a disruptive influence on the willpower required to use Green Power Rings. They often disrupt them to the point where they stop working.

Unlike most Power Rings, Reds don’t necessarily look for a constant something in their wielder’s character. They often seek those undergoing moments of rage.

Some may have a constant source of violent resentment, or a natural inclination towards rage [In DC Heroes terms, those with the Rage Drawback]. But many are simply experiencing a temporary burst of anger – and an intense desire for revenge for wrongs inflicted upon them or their loved ones – that might otherwise dissipate over time.

Exemplars of the traits the Red Power Rings look for include Atrocitus (sector 666), Guy Gardner (sector 2814), and Bleez (sector 33).

Being on the outer edge of the emotional spectrum, the Red Ring exerts an extremely strong influence on the wielder. Even if their rage is reduced – although never to a controllable level – their personality can be significantly different to how it was before. Furthermore, it may influence them to alter their appearance through use of the Ring. 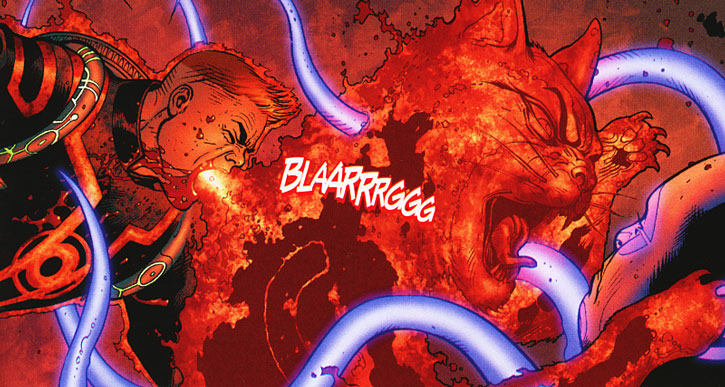 On being chosen by the Red Power Ring, the wielder is filled with an overwhelming rage, and a desire to gain revenge for the incident which inspired their rage.

The Rings have been designed by Atrocitus to keep the Red Lanterns in a state of permanent Rage, unable to speak or do much in the way of think, and to obey him.

(In DC Heroes terms they’re given Catastrophic Rage, a CIA towards violence, and a SIA towards obeying a Red Lantern with a higher Influence.)

Atrocitus can change this by having them undergo a ceremony where they dive into the lake of blood which feeds their central battery. The process forces them to relive the events which caused their rage [they suffer a 12 AP Phobia attack]. None have been seen dying of the immersion, but this may be a possibility for the weak-minded.

On surviving [regardless of whether they overcome the Phobia] their mental faculties are restored, and their rage becomes more controllable. [They lose the SIA towards obeying, and their Rage and IA towards violence are reduced by a category (unless they had a Catastrophic Rage of their own prior to recruitment)]. Atrocitus may have altered the Rings so new wielders are in this less enraged state.

(The wielder may buy their Rage down like they would a normal Drawback (possibly after completing a Subplot dealing with the source of their rage). But it can never be bought off entirely without the ring rejecting them, which can be fatal.)

Their rage interferes with the Ring’s ability to produce force Constructs, making it hard for them to focus their thoughts. [The power is Marginal, with a severity one category less than their Rage, the Limitation disappearing entirely if their Rage is reduced to Minor]

Should a Red Lantern survive being freed from the Red Power Ring, they could well suffer post-traumatic stress from their time wearing it (unless the cures also heal their mind). [This could manifest as Traumatic Flashback, Guilt, or some other mental Drawback (GMs discretion)].

One odd result of the Red Power Ring’s influence is that Dex-Starr, apparently a normal Earth cat before being selected, can now speak (not well, but he’s understandable). Possibly he was in some way mutated before selection, explaining his being selected by the Ring, and this allows him to speak through the Ring.

Atrocitus has used rituals allowing him precognitive abilities, but did so prior to forging the power battery and creating rings, so whether other Red Lanterns are able to use it once allowed their mental faculties is unclear.

However, when wearing a Red Ring, Guy Gardner experienced a vision, so it appears accessible to all given the right condition. Atrocitus, however, has Rituals allowing him to control it.

On one occasion a Red Lantern’s napalm congealed into a carapace that even Apollo had trouble burning off. This hasn’t been shown on other occasions when it could have happened, so it’s unclear whether other factors were in effect at the time. 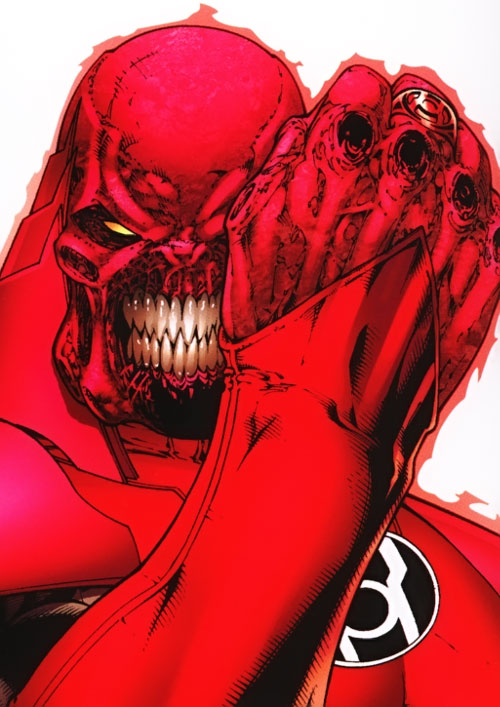 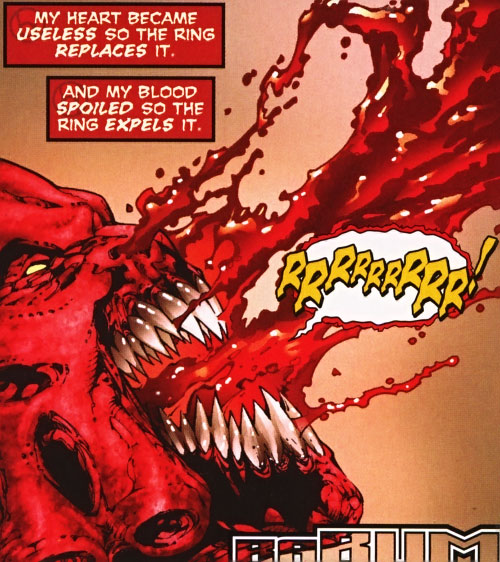 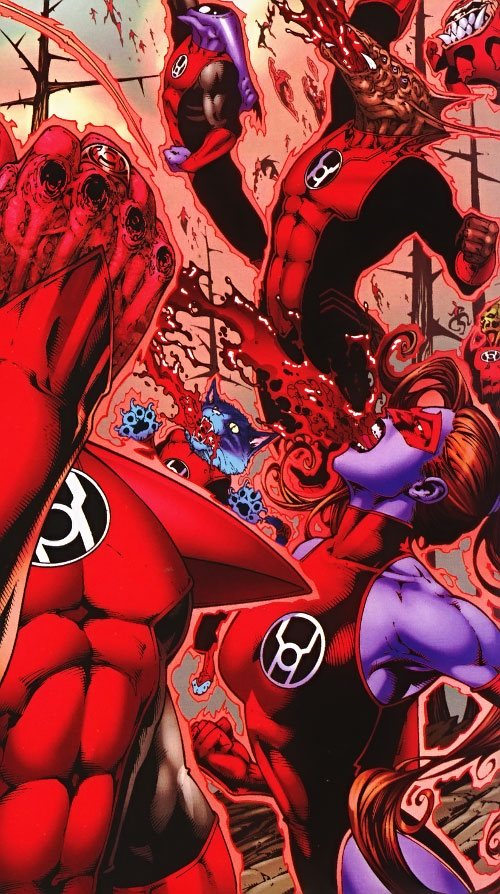 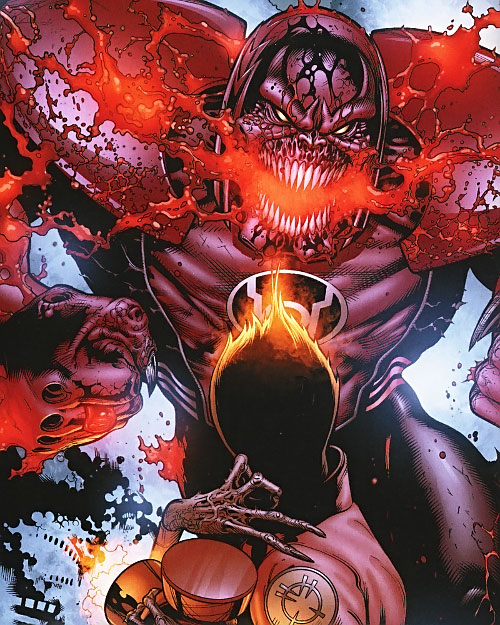 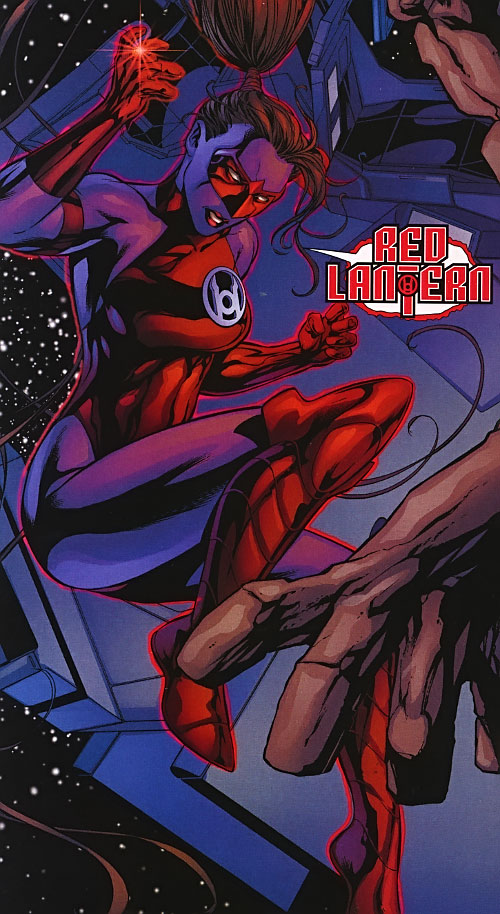