A highly talented stuntman, William has learned various abilities, such as the clinging to the tiniest projections of walls like a “human fly”.

A friend taught him the trick of striking bullets and arrows from the air.

He can take a great deal of damage, and has come to often sense when he is in any true danger.

In addition to his remarkably sharp sword, he has been known to carry a gun that shoots a swingline with an adhesive end. A thinner amount of the same adhesive can be released from the soles of his shoes, to aid him when he clings.

Not all that powerful, he would prefer to lure some do-gooder into a building he has previously booby-trapped with gimmicks.

William Harding Spencer had very old fashioned parents, from whom he learned to love the early days of the movies. Douglas Fairbanks, Harold Lloyd, and especially Errol Flynn  were his heroes. To be like them, William spent long hours training himself. He became so good that he convinced himself he was practically a reincarnation of the legendary Flynn.

After attacking a critical casting director, William was blacklisted as an actor. So instead, he found work as a stuntman. After all, most actors just read lines, the truly skilled physical actors did their own stunts. Besides, they were all just jealous, just wait until he decided that he wanted to DIRECT!

He may have angered the wrong people, but he would eventually prove his naysayers wrong. He WOULD indeed appear in movies, just as his legendary heroes had done.

Nobody does it better

During his career, he has had more than his share of accidents. While some were caused by his reckless flamboyance, others were simple bad luck. Eventually, he developed a sixth sense for danger and became one of the world’s best stuntmen. Surely, no one else in the world was capable of doing the things he could do…

Unfortunately, the one flaw in William’s view of the world was superpowered people. These were mystery men who could perform feats that the old movie legends never could.

That simply would not do. William donned mask and cape as the Red Rapier in order to show these people the error of their ways, and prove once and for all that no-one does it better.

Any job that offered the chance of excitement and publicity would be accepted. Particularly if there was any opportunity to best one of those false idols, the superheroes, in public. As far as he’s concerned, the option for this story has been secured, production green-lighted, and action called,… but the final cut would be his alone. 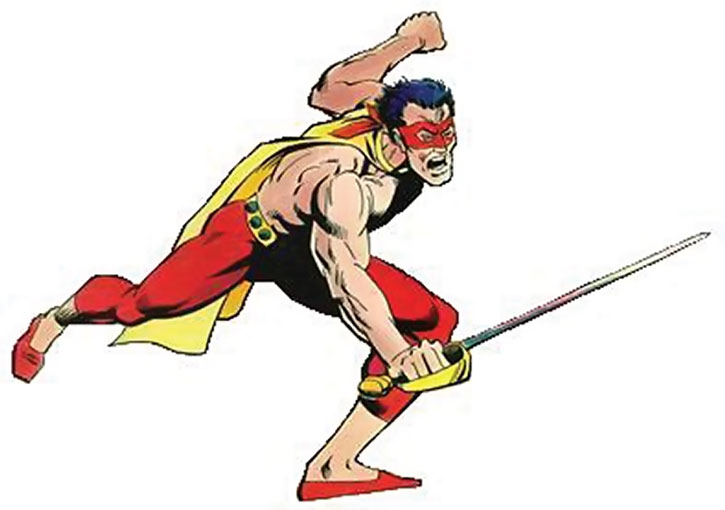 The Red Rapier wears a tied-in-back, wrap-around eyemask, tights that end mid-calf, and shoes that are all red. His chest is bare. His belt is yellow with large green studs. He wears an orange cape with a yellow lining that ties neatly around his neck.

He possesses a toned, athletic build.

William is a determined individual that’s more than a bit obscessive and conceited. He is also an overcompensating, insecure, ridiculous over-actor.

While he may secretly envy true superbeings, it can be certain that the growing number of superhero movies has him up in arms. How dare they? Nothing can compare to the classics.

“‘I know something you don’t know! I,… am not left handed!’  HA! I love that line. I would have delivered it better of course…”

Red Rapier would have been an early Blue Devil adversary.

Bonuses and Limitations:
All powers are skilled, Ref/Def against physical objects only (arrows, bullets, etc.).