Redbird first received traditional Sioux  warrior training from her grandfather. Then she was trained in counter-terrorism at the FBI , and a Black Razor by IO.

Redbird is known as a meticulously exact marksman, and a top-shelf knife-fighting expert.

While her grandfather was raising her in a reservation  in Sioux Falls, her father was HALOing into hotspots around the world with the Special Forces. After his death, she was consumed by the desire to follow in his footsteps.

While in a FBI Counter-Terrorism  team, she was tapped by IO to join the Black Razors. Her reputation as marksman and close quarter combatant brought her to the attention of John Lynch. He was creating an ultra-secret spoiler team he dubbed Black Ops.

Amid the confusion resulting from Lynch’s “resignation”, they received an order to bring their mission one step higher. They were to kill the executives of an American corporation, somehow linked with plans to make a coup in ex-USSR. Their field leader died in the operation.

The hitmen of the said corporation retaliated at Black Ops’ HQ. Waiting for IO’s back up that never show up, they had to pull back in a hurry. But while doing so they received an encrypted message. The anonymous message told them to contact former Black Razors’ leader Colonel Crane, as he was likely to help them against Mr Big: former USSR General Markov.

And so did he join them, to take the chance of repaying Markov for his wife’s death.

They infiltrated Markov’s research complex, in Estonia. As they were tracked all along by IO, they meet a squad of Black Razors that tried to stop them before they could raise an international incident.

Back in the USSR

This team was led by Crane’s former recruit Fleming. These were forced to pull back, first because they fell for an EMP grenade that disabled their gear. Then because they were ordered so to avoid the issue involved in a US military operation on foreign ground.

Then, after Craven’s death, as the interim director was close to uncover Kwan’s involvement, she ordered her HEATERS to turn against Markov. This greatly helped Black Ops in their task of stopping Markov’s scheme to seize control of Russia to bring back the former USSR’s might.

Markov thought that his latest Molot mecha  was operational. So he tried one to dispatch both Black Ops and the HEATERS. But he was betrayed by one of his scientist, who destroyed the prototype, with the mad General inside.

Afterward, Crane contacted Giovanni, at Department PSI. He sought their sponsorship and protection. Black Ops were send on the trail of some nanotechnology, one related to the Gen-Factor. They ran into Ivana Baiul and her DV8, as she was sponsoring the research to use it to boost her Gen-Actives.

They couldn’t prevent her to get away with the goods, but they managed to trace them to their hideout. They infiltrated the complex, and won the showdown with DV8. Black Ops escaped shortly before PSI ordered the sterilization of the area.

Redbird is a woman of Sioux origin. She has long hair, and a small tatoo, picturing a tear, under her left eye.

She is a good soldier, following her CO orders, and expecting her subordinates to do the same with her. She constantly fights against GQ’s attempts at hitting on her. 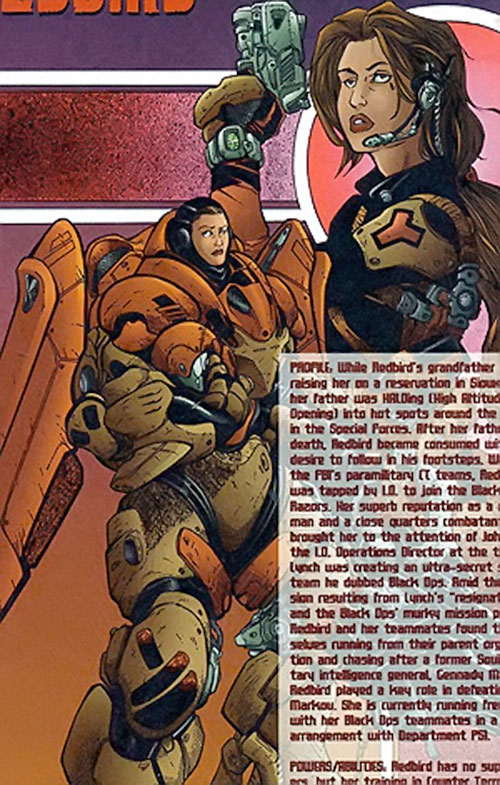 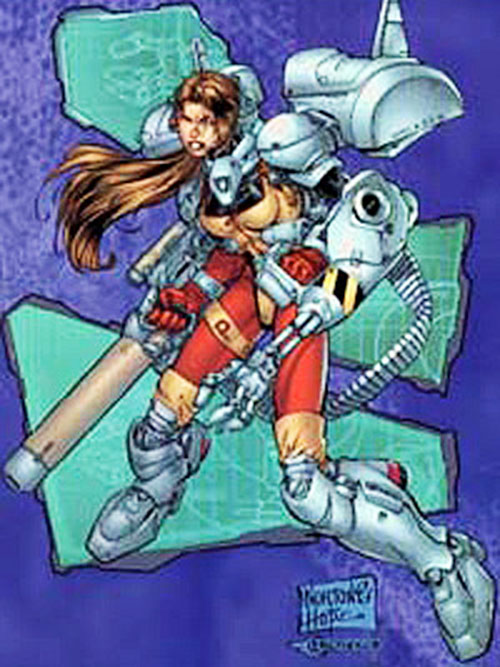