Reese is an extensively trained military man. As such he possesses knowledge in many different skills, including:

His overall effectiveness is greatly increased by his various cyborg abilities. The enhancements done on him give him superhuman toughness. Also installed are various detection abilities such as thermal sight and radar. His inbuilt visor provides him with effective resistance towards flare attacks.

During his days as a Hellfire Commando he was imbued with a permanent mental block against various psionics by Emma Frost.

His greatest assets are probably his physical toughness, tactical mind, his determination and his coolness under fire.

After finishing his military career, Sergeant Reese started a career as a mercenary. He ended up working as a Hellfire Commando, who’s the elite forces and security guards of the nefarious Hellfire Club.

Along three cyborg friends, Macon, Cole and Arnold, he worked alongside Lady Deathstrike in order to kill Wolverine. The attempt failed and Arnold was killed.

Reese, Macon, Cole and Lady Deathstrike then joined forces with the remaining cyborg thugs known as the Reavers. Back then, the Reavers just lost their headquarters in the Australian outback to the X-Men. The Reavers’ current leader was the old member of the Hellfire Club’s Inner Circle and an old enemy of Wolverine, Donald Pierce. The alliance formed was thus a logical choice.

The gang, now consisting of eight members (Reese, Macon, Cole, Lady Deathstrike, Bonebreaker, Skullbuster, Pretty Boy and Donald Pierce), managed to kidnap Wolverine from their HQ. After torturing him (they even crucified him), they planned to kill him.

Fortunately for the X-Man, the mutant Jubilee freed Wolverine from the cross. The raging Pierce sent all his men on a hunt to bring Wolverine back, but they failed to do so. Pierce reasoned that Wolverine probably had returned to Muir Island, Scotland. Thus, he sent the entire team there to kill Wolverine, level the place and kill any other mutant they might find.

In a surprise attack, they managed to nearly kill Banshee by shooting him with a sniper rifle. The Reavers then fought Polaris, Amanda Sefton, Forge, Moira MacTaggert, Sunder, Legion and others present on the island, when Freedom Force suddenly arrived. The battle quickly turned bad for the Reavers. Skullbuster was killed and they had to abandon their mission.

Later the Reavers were attacked by Sentinels sent by futuristic mutant Lord Fitzroy. Quite possibly Reese was among those killed in that attack, but that remains to be seen.

Reese is a man of above average muscular built with crew-cut blond hair and blue eyes. He appears to wear a helmet and other technical equipment, but, in fact, all of it is built into his cyborg body. On his bare skin are easily visible circuits and connections. Immediately beneath the skin is a tough metallic alloy, which becomes visible when he’s damaged.

Covering his body is a military camouflage uniform or commando trousers and a vest along heavy boots. While at work, he moves in confident military manners while securing the area from any enemies.

Reese is a professional, no-nonsense, ex-military man who takes his mercenary job very seriously. Having an extensive background as a Hellfire Commando, and thus accustomed to desperate fights, he’s a pretty hard-boiled individual. He orders his men around a lot, being an old sergeant, (to the point of nagging) and is careful for their safety.

In the field he has a very tactical mind and is, on occasion, asked by his pals for advice. Usually no witnesses are left behind. Like all other ex-Hellfire Club cyborgs he bears a great hatred towards Wolverine. In his spare time he enjoys watching and discussing movies, as well as playing cards.

He, of all the Reavers, probably has the most respect for their ruthless leader Donald Pierce.

“Team one has arrived at destination point. Heavy counter-fire, so stay cool !”

Cole: “We’re soldiers, Reese — the best — not cleaners.”
Reese: “Ok, then *you* go talking to the boss. Mr. Pierce will like your proposition. Exactly like he likes you running away from work. On the other hand, boys, we’d be lying alongside with the three first Reavers on Pierce’s working desk.” (Intimidating his nagging buddies into starting boring work)

Reese is a cyborg mercenary and thus not big deal in the DC Universe. He’d easily be inserted as is, but his origin has to be connected to some other villainous group, and to some other vigilante. For example, Reese could have been working for Cobra’s Cult when he was mauled by some ruthless vigilante. 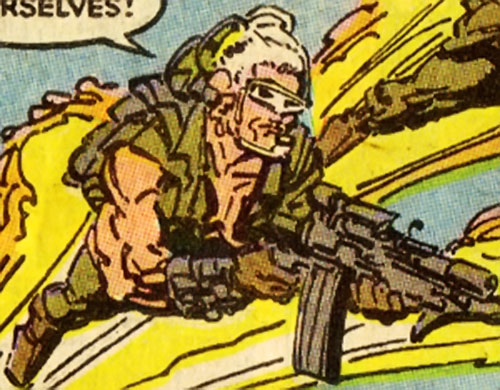