Sovereign Seven was a rare creator-owned series set within the DC Universe.

It was written by Chris Claremont (who back then was still seen as the focused totality of the X-Men’s psychic narrative), and lasted from 1995 to 1998.

Reflex has superhumanly fast reflexes, and can move extremely fast. He has proven to be faster than Impulse (Bart Allen), although he was straining himself when he did so.

The natives of Reflex’s world are larger than on Earth. And so his physique gives him an advantage in strength.

He also has superhuman sight, able to view nuclear structures.

Reflex is a prince from a Norse society. But his world fell prey to the Rapture – an invading hive mind from another dimension. His people were strongly religious, worshipping a Nordic version of Jesus, and Walter had hopes of becoming a Preacher. Walter was rescued from the encroaching Rapture by Cascade, and joined the Sovereigns.

Fleeing the Rapture, they arrived on Earth, near the Crossroads Coffee Bar. The bar is run by the sisters Pansy Smith and Violet Jones. It is larger on the inside than it appears from outside. Some doors within the building sometimes opening into other places, even other dimensions.

The refugees came into conflict with the Female Furies of Apokolips, causing damage to the bar as they fought. Afterwards they helped repair the damage and took jobs there.

Their first encounter with the strange properties of the bar came when Cascade disappeared, through one of the doors. When they found her, the other Sovereigns discovered she had been brainwashed and transformed into Nike by an unidentified opponent. As such she joined Zelus, Bia and Kratos. They used her to try to open an enormous set of doors.

They settled into their new home. They protected it from extraordinary threats, such as Dystopia, Deadline, and the super-powered serial killer Skin Dance. The latter an old enemy of Crossroads’ sheriff, Molly Savoy, who had befriended the Sovereigns.

The Sovereigns went searching for a couple of teenagers (Casey Rassendyll and Daisy Miller). These had gotten lost in the Bar when the Sovereigns had a battle there.

They travelled to their homeworlds. This is how they first came into conflict with Triage, a creation of Maîtresse, sent to retrieve Cascade and fight the Rapture. Triage had empowered a couple of other individuals it had freed from the Rapture, but brainwashed to obey it.

Sovereigns member Network received a psychic distress call from a captive telepath, a slave of a company called allied with the Shogun crime cartel. Network allowed herself to be captured by Chimera, an android serving Shogun, although she was actually in control. She kidnapped Cascade and Conal Savoy, Network’s boyfriend, as presents for Dana Efemilia Hanro, the head of Shogun.

The other Sovereigns, and Conal’s mother sheriff Molly Savoy, tracked them to the island of Meridian. They came just as Network was carrying out her plan to free an infant telepath held captive by Shogun.

Following their safe return, Cascade, feeling Network’s betrayal the keenest, left the team. She tried to start her own life in Manhattan. She returned to the team after a while.

They again came into conflict with Zelus, Bia and Kratos who had gained a new Nike, the transformed Power Girl. Yet Sovereign Seven managed to defeat them and free her from the enchantment. Soon afterwards they were asked for help when power-seekers released the Gatekeepers of the Abyss. In fighting them, Rampart was killed. Power Girl took his place on the team.

They became involved a civil war in the country of Kuristan, a neighbour of Russia. This ended when the Rapture arrived on Earth. Despite having their powers suppressed, they managed to repel the invasion.

Calm and even-tempered, Reflex is deeply spiritual, and fond of children, even teaching the local Sunday school class in Crossroads. On his home world Walter was training to be a preacher.

He developed a crush on Power Girl when she joined the team.

“Each day, young comrade, in its turn. Each moment as it comes.”

“Ymir’s breath, do y’think I’m making things up, then ? What about all this blood ? Blast your eyes, Indigo, I saw demons there.”

(Praying) “Thou didst make thy son a Viking, o Lord of hosts. That he may know defeat – but never surrender. Grant me a portion of that courage !”

“By the book of blessed Ygvald !”

“I was born a prince. ’Preacher‘ is a title I must earn.”

Bonuses and Limitations:
Density Increase and Growth are always on and is already factored in (-1).

Bonuses and Limitations:
Vehicles (Water) is for Viking era sail boats only (-1).

Drawback:
MIF of Heights, MPR (Reflex is too large to easily use a lot of equipment on Earth, i.e. Pencils, computers). 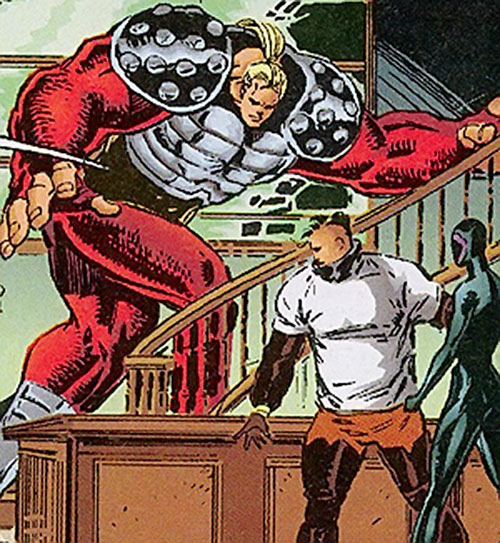