Remnant knows the secret of a strange fabric that can defy ordinary physics. A typical use is to make flying carpets out of it.

Remnant also made various projectiles out of his fabric. These produce diverse effects when they hit something.

He’ll also commonly wield bands of his fabric as whips of a sort. Remnant is precise with weapons made out of his fabric whether in melee or at a range. This may be due to a sort of telekinetic control.

One gets the impression that this fabric is magical, but this is never specified. The name “Remnant” might be an allusion to the origin of the fabric.

Remnant keeps vast amounts of items made out of his fabric in the “bottomless pocket” in his trousers. This also seems to be a magical artefact, and may be a hint that Remnant is some sort of enchanter specialising in fabric and clothing.

There are multiple flying carpets in there, for instance. Remnant prefers to pick carpets with a surface area and maximum load adapted to what he needs to carry.

One gets the impression that Remnant’s costume had some protective properties. For instance, a heat beam right in the chest knocked him down and stunned him but didn’t seem to actually burn him.

Remnant seems to be a competent tailor and likes to sew. This is apparently how he creates new items from his special fabric to replace expended projectiles, lost carpets, etc.. No other skills were demonstrated.

Remnant lives on a parallel Earth often called “Earth-S”. The “S” is for the Squadron Supreme – super-heroes native of that Earth, and who are generally reminiscent of the pre-Crisis heroes of the DC Universe. The proper designation for “Earth-S” is Earth-712.

Remnant cares very little for the law. He is an eccentric who prefers to live unfettered by social conventions. His crimes appear to be very mild, though, and he doesn’t kill. He clashed several times with Nighthawk, Earth-712’s equivalent of the Silver Age  Batman.

Remnant was a minor member of the Institute of Evil. This was a group of super-villains organised by the time-travelling Scarlet Centurion of Earth-712. He wasn’t part of the original roster. He joined later – perhaps at the request of Institute member Mink, who seems to be a friend of his.

The Institute was later joined by Pinball, who counts Remnant as one of his few friends.

During the 1980s, the super-heroes of Earth-S changed the rules. They took over the world to turn it into an utopia. Part of their techniques involved brainwashing super-criminals to turn them into allies. 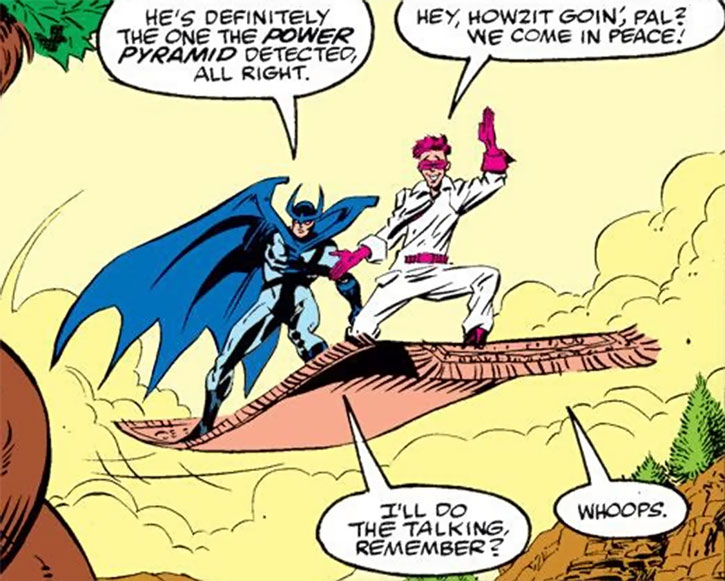 This horrified some of the campier, Silver Age-ish criminals Nighthawk fought – particularly Remnant, who valued his integrity. He, Mink and Pinball contacted the genius Master Menace for a way out. Menace agreed to transport them to Earth-616 .

The trio coincidentally ran into Nighthawk, who had come to Earth-616 for help as he rebelled against the Squadron’s new policies. Remnant was defeated in short order when Captain America (Steve Rogers) joined the fight.

The three criminals, Nighthawk and Captain America negotiated and reached an agreement. Mink and the other two would join Nighthawk to struggle against the Squadron, and return to Earth-712.

Over the following days Nighthawk and his recruits assembled a force of super-villains. They were helped the Sorcerer Supreme of Earth-712, Professor Imam. The team was called the Redeemers. Five members whom the Squadron didn’t know about were successfully sent to infiltrate the opposition.

The original three Redeemers were kept in reserve. They were joined by another renegade Squadron member, the Black Archer.

During this time Remnant mostly helped by providing flying carpets. He also crafted specialised costumes, such as the one worn by new recruit Redstone.

He fights for freedom

During the showdown between the Redeemers and the Squadron Supreme, Remnant was nearly taken out when his colleague Thermite accidentally hit him. He recovered in time to engage the Blue Eagle, but the Eagle soon flew away to help his colleagues. Remnant gave chase on a flying carpet.

To his horror, he saw Lamprey neutralise Blue Eagle’s wings and Blue Eagle fall on Pinball. The crash killed both men before Remnant could reach them.

Remnant stopped fighting to stay with Pinball, though Lamprey refused to call an ambulance. He was still by his dead friend’s side when the fight was over.

He keeps his hair in a hot pink mohawk.

Remnant apparently just wants to be free, and isn’t interested in killing people. He disliked orders and hierarchies, but seems to be otherwise friendly. Especially with people outside of social norms like Mink and Pinball.

He occasionally flirted a bit with Mink, but that seemed to be a joke between friends.

Remnant often comes across as being a bit flaky, 1980s space cadet style.

Writeup completed on the 1st of September, 2012. 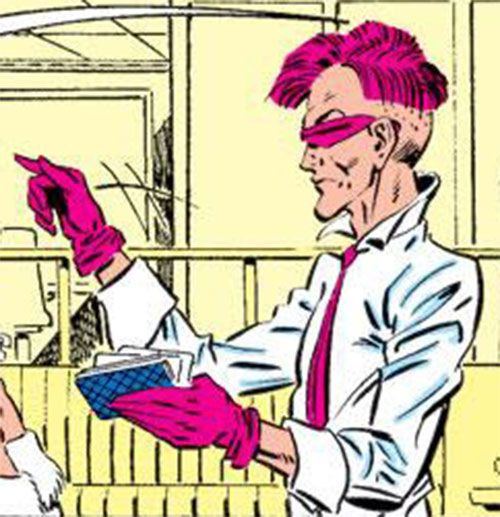 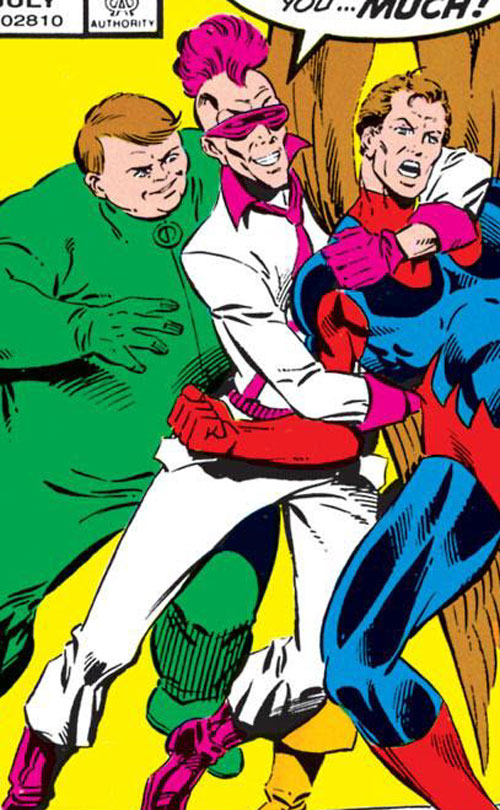