Rex has had extensive genetic and cybernetic alterations to his body. These allow him to cause any inorganic object he holds in his hands to become volatile and explosive.

The charged particles create visible fields of plasma that envelop the affected items. The combustive object can then be thrown at a target where upon striking it will cause the item to explode. The generation of heat in large quantities accompanies the explosive chemical reaction.

The detonation is initiated by the application of shock or impact to a small portion of the mass of the explosive material. The blast is equal in damage and effect to the relative to the size of the hurled object.

He was also extensively trained in close combat “hand to hand” stand-up, clinch and ground fighting styles, as well as various forms of martial arts, boxing, and wrestling. He can press 1,000 pounds over his head without assistance.

Finally, after his hand was bitten off by a member of the Lizard League, Rex received an artificial hand. It uses his charging ability to fire small round explosive projectiles.

The brash superhuman crime fighter Rex-Splode came from humble origins. Born into a desperately poor family, young Rex lived a life of hunger and want. That lasted until a nameless government agent made his family an offer they could not refuse. In exchange for their son, Rex’s parents were offered enough money to escape from abject poverty.

They signed over custody of Rex to the government and never saw their child again. The nameless agent represented a secret government bio-engineering program that had identified some potential or unique quality in Rex. Over the next decade they forged Rex into a human weapon.

He received training in espionage, gymnastics, and all manner of martial arts. Chemicals and hormones altered Rex’s muscle tissue, making it denser and stronger. Cybernetic devices were surgically implanted in his arms, enabling Rex to make inorganic objects explode.

The true purpose of the secret government program is as yet unrevealed. But they sent Rex on dangerous covert missions across the globe. Initially loyal, Rex began to question the morality of some of his assignments. He ultimately escaped from the program in a spectacular and destructive fashion.

Curious as to the fate of his family, Rex used his espionage skills to track them down. He found his family living a life of comfort and happiness that had been purchased by selling their son to the government. Rex was heartbroken.

Rex-Splode vowed to use his skills and powers to battle evil. He began a career as a costumed hero. He was a founding member of the Teen Team where he distinguished himself on missions but behaved rather poorly otherwise. He dated his teammate Atom Eve for a period but their relationship ended when she caught him cheating on her with another teammate Dupli-Kate.

Ironically, after both Rex and Kate joined Robot’s new incarnation of the Guardians of the Globe, history repeated itself. This time Rex was on the receiving end. He caught Kate sleeping with the Immortal.

With the assistance of the Maulers, Robot recently utilized a sample of Rex’s DNA to create an adolescent clone of Rex. The clone possessed the personality and memories of the deformed human that was secretly Robot. Rex was stunned to learn of the cloning, and it is yet unclear how well he is handling this revelation.

A near death experience

During his last mission as a member of the Guardians of the Globe, Rex was dispatched to Montana. The mission was to prevent a nuclear war brought about by the Lizard League. In the ensuing battle, all of his teammates were seemingly murdered by the savage villain Komodo.

Rex battled valiantly, murdering Komodo and incapacitating King Lizard with a single blow. But in the fray he had his right hand bitten off, and was then shot directly through his head. Collapsing, Rex fully expected to die. He was pleasantly surprised to find out he survived.

After his slow yet miraculous recovery, he was given an artificial hand. It worked in concert with his charging power, allowing him to fire explosive projectiles.

A deal with Stedman

Outside of an attempt on his life by Dupli-Kate’s insane brother, Multi-Paul, Rex’s life returned to normal with the Guardians of the Globe. This all changed when Invincible came under attack by the Guardians’ government handler, Cecil and his Reanimen.

When Rex realized that Invincible was truly in danger, he immediately joined his friend’s side. Thus, he helped him defeat the Reanimen. Rex and the other former Team Teen members then quit the Guardians of the Globe in retaliation for Cecil’s questionable actions.

Rex and the other departing members of the Guardians returned to their Teen Team HQ to form a new independent team. Yet, they never settled on a name. When the Invincible War began, they were attacked by one of the Invincible counterparts, who badly mauled the team.

Making the ultimate sacrifice, Rex distracted the alter-Invincible long enough for his teammates to get clear. He then charged the only thing he had left to attack with — his own skeleton. The resulting explosion killed both Rex and the Invincible counterpart.

Many heroes attended Rex’s funeral in the aftermath of the Invincible War. His teammate Robot, who had replaced his original disfigured organic body with a clone of Rex’s body and who had only gone by his superheroic nom de guerre because of his discomfort with that previous existence, announced that he was taking the name Rex as a way of honoring his fallen friend.

Rex is a slim yet muscular attractive young man, with near shoulder length brown hair. He normally wears a yellow and orange costume with a Batman-like cowl with goggles that obscure his eye colour. He also generally carries a pouch containing all manner of objects that he can charge as weapons.

Rex-Splode has been described as brash, shallow, and pathologically self-centered. Yet he dedicates his life to protecting innocents and crushing evil. Considering his traumatic childhood and harsh upbringing, this really shouldn’t come as a surprise.

Despite his background, Rex has been learning from his recent mistakes and trials. Even people such as his former girlfriend Eve who suffered considerable grief over his previous inconsiderate behavior have remarked on his growing maturity.

“That was a BB, you don’t want to see what I can do with a golf ball.”

(At the Guardians of the the Globe tryout)
Rex: “Well, I just wanted to let you fellas know that I really razzled and dazzled them in there. So there’s at least one less spot left for you guys. Sorry.”
Another applicant: “Yeah, whatever… asshole.”
Rex: “Sore loser.”

Bonuses and Limitations:
Energy Blast has the Charge Object Bonus.

This is presumed not to require a Bonus as it is a natural extension of the two Powers. However, GMs who are concerned about game balance can require characters to purchase a +1FC Bonus to Projectile Weapons before allowing this option to be used. 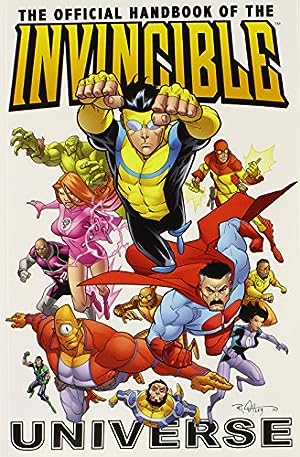 The Official Handbook Of The Invincible Universe 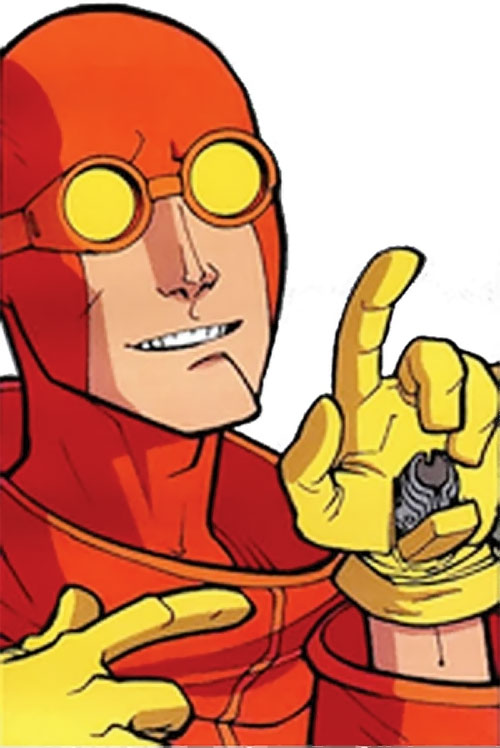 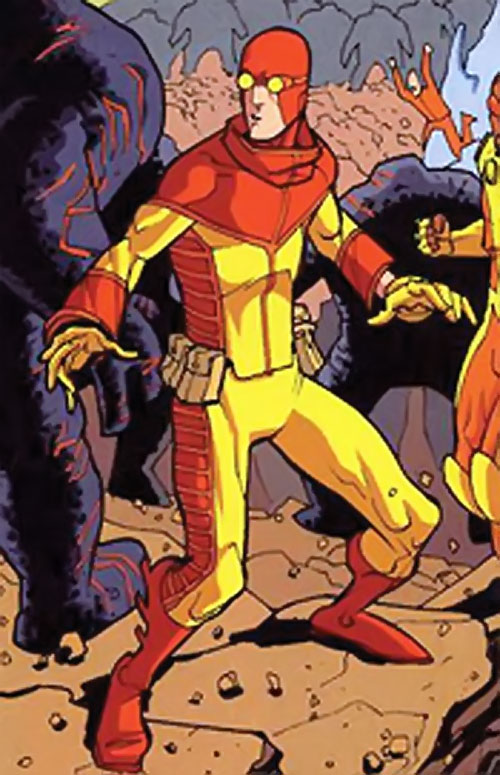 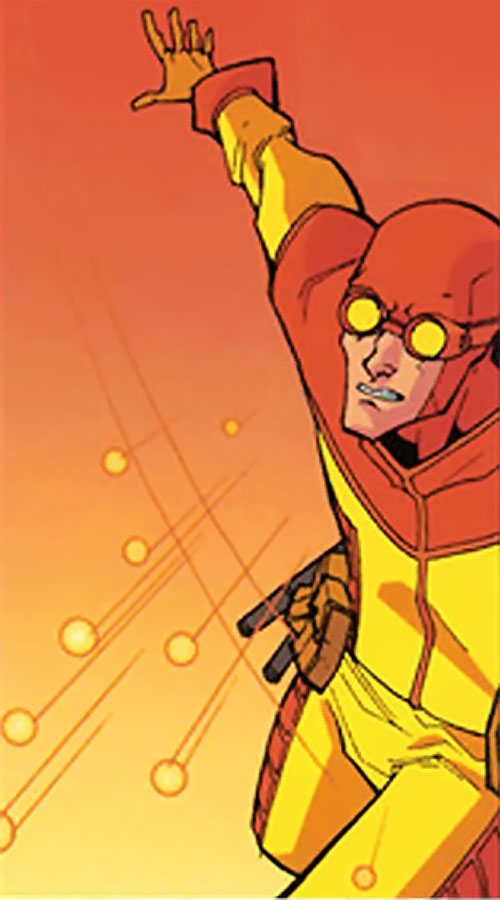