Due to reasons, we have two different takes on King Mystery. The other Rey Mysterio character profile is there.

Rey Mysterio is a gifted acrobat and martial artist. His mystically-constructed mask used to increase his already extraordinary agility and acrobatic skills to superhuman levels.

The odd Nahua-style tattoo upon his right forearm now provides him with powers similar to those his mask possessed originally. Though not providing quite as much dexterity as the mask once did, it gave Oscar the spiritual resolve to return to his masked identity after originally losing his mask’s supernatural powers and getting severely injured.

If you like, you can make his back tattoo the source of his re-found powers. The creepy spinal tattoo is physical evidence of a cerebral demon that has possessed Rey and is using him toward his own ends. See the Brock Lesnar write-up for more.

Óscar Gutiérrez, the man who would become Rey Mysterio Jr., was born in San Diego, California in 1974. His uncle was a local masked hero known as Rey Mysterio. Mysterio was known for his great acrobatic skills as well as his proclivity for changing costumes and masks to keep everyone guessing. This is what earned him the “King Mystery” moniker.

On his nephew’s 15th birthday, Mysterio took Óscar to the gym to train him in using his natural athletic ability. Óscar began wrestling and performing in local Lucha Libre (“free fighting”) competitions throughout Southern California and Mexico under the name “Colibri” (Cricket).

He quickly took to the sport and, before he was 16, was astonishing audiences and fellow competitors with his acrobatic martial arts skills.

Putting on the mask

When Óscar turned 17, his uncle took him into Tijuana. They bought a new mask from the same man who made his own wide range of costumes. The elderly man crafted the mask with special, quasi-mystical properties that would only become apparent later.

That night, Rey Mysterio invited his nephew to join him in his patrol of their town, wearing his new mask. When Óscar put on the mask for the first time, his uncle dubbed him “Rey Mysterio Jr.”. In so doing he activated the powers of the mask, changing Rey’s costume and granting him increased agility and acrobatic skill.

Rey Jr. became a popular and loved hero of his community. He worked both alone, and in partnership with his uncle.

Rey Jr. had many adventures, facing off against opponents such as his arch nemesis Psicosis along with another common rival Juventud Guerrera. He would also turn down offers to join Eddie Guerrero’s Latino World Order.

Having befriended the criminal-turned-vigilante Konnan, Rey Jr. crossed paths with one of Konnan’s former criminal cohorts, the overbearing NWO enforcer Kevin Nash. Nash was embarrassed by having been defeated by the much smaller Mysterio. Thus, he devised a plan to steal what he knew to be sacred to Rey, his mask and legacy.

By their next meeting, Nash had unmasked Rey on national television. As a result, Gutiérrez lost his impressive powers and his body was broken. But Óscar would surprise everyone by continuing to battle against injustice, even without his mask.

Óscar used his newfound fame and notoriety to speak out. He also dispensed a little gangland justice of his own. Both alone and along with some of his friends in a misfit group called the Filthy Animals, he fought fire with fire, matching criminals with their own tactics. But eventually, his injuries and the threats to his family forced him to stop.

Return of the King

Over a year passed, and no-one knew where Óscar disappeared to. But once again, the masked hero was seen battling in all his mystifying acrobatic glory.

Rey Mysterio is short, muscular, and graceful. Without his mask, he possesses a babyface look offset only by his tattoos, earrings, and occasionally whiskered chin.

His mask is a full-head cowl with phoenix-like designs on the side and either a stylized cross or crown insignia on the forehead.

Rey is cocky, and confidant. No risk is too great. He thrives on challenges provided by much bigger, stronger opponents.

Raised Catholic, he sees himself as a modern David facing the many Goliaths this world can prop up before him.

“If I have to earn your respect by beating you, I will take you down.”

If used during his original masked period, his mask imparted the following abilities: MASK [/DEX/ 12 BODY: 04, Acrobatics: 12, Color: 12. Bonus & Limitations: The Dex of the mask is factored into his Initiative when he is wearing it. Color can only affect Rey’s costume and mask. If Rey is unmasked publicly, the mask loses both DEX and Acrobatics permanently].

By REZcat and Andrew Lee, based directly on Andrew’s original. 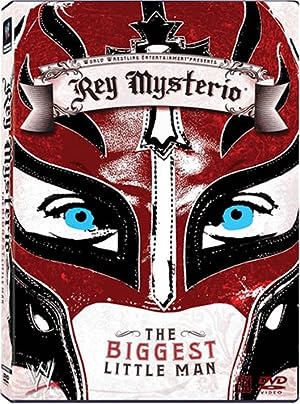 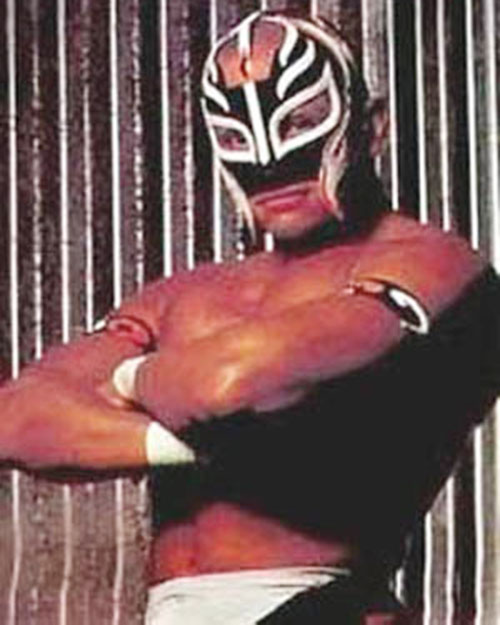