Reynard is one of Black mask’s best wiseguys. He takes initiatives and get results.

Which is a good thing, since False Face Society wiseguys who don’t get results end up dead.

Reynard is on the crazy side. He favours explosions of high-speed violence. His style includes :

Reynard was a False Face Society wiseguy. He was sent from Gotham to establish a solid foothold in the neighbouring Blüdhaven.

He aimed to take down Blüdhaven mob boss Angel Marin. What he didn’t know is that Marin had been quietly replaced by the ruthless Blockbuster (Roland Desmond) a few weeks before.

Reynard worked with an apparently crooked cop, Dudley “Deadly” Soames, to locate opportunities to turn a profit and hurt local criminal interests. However, Soames was playing a complicated game and tipped the newly-arrived Nightwing (Richard Grayson) about Reynard’s operations. 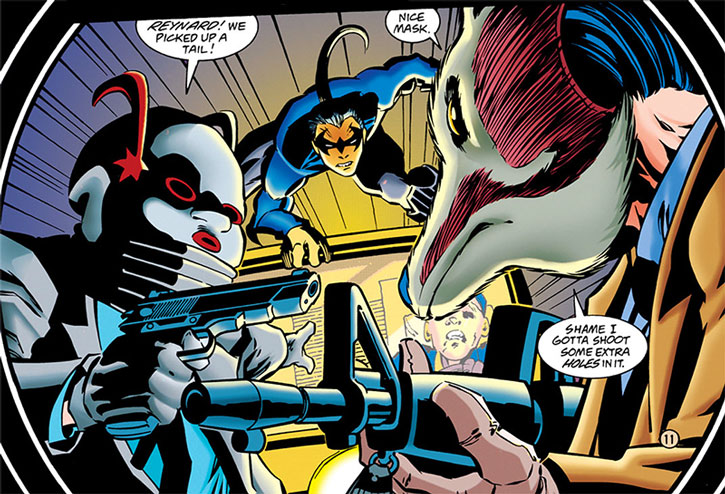 Nightwing twice tangled with Reynard’s men, stopping them but failing to apprehend Reynard.

A killer from the False Face Society was then dispatched to murder Reynard for his failures. But the mad dog killer terminated his assassin, and launched another operation to get back in Black Mask’s good graces. Soames betrayed him once more, and this time Reynard was captured by Nightwing. This attempt by Black Mask to set foot in Blüdhaven was over.

Reynard easily got out of jail thanks to the massive corruption in Blüdhaven police department, and confronted Soames. Blockbuster came in as he did, and apparently killed Reynard and his men by twisting their necks.

As his name indicates, Reynard wears a fox mask.

Reynard is a Tarantinesque mad-dog killer.

He’s pumped full of homicidal hatred, and always go for the most violent and most kinetic operations. Anyone who thwarts him will trigger his maniacal hatred.

He enjoys killing, and will do it in a cruel way if at all possible. When he captured Nightwing the first time, he preferred to tie him to a heavy fridge and tossing him in the river to die. Instead of just shooting him while he was unconscious.

Reynard employs about 12 goons from the Black Mask mob, replacing losses as he goes. All wear masks, of course.

As with many members of the False Face Society, they are more dedicated and ferocious than the run-of-the-mill thug. 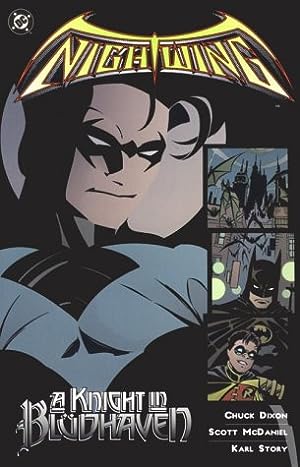 Nightwing Vol. 1: A Knight in Bludhaven