Rhino in your typical brick . He is extremely strong and tough. He’s quite famous for his charge attack, which is almost impossible to counter unless his opponent is extremely adept at dodging. 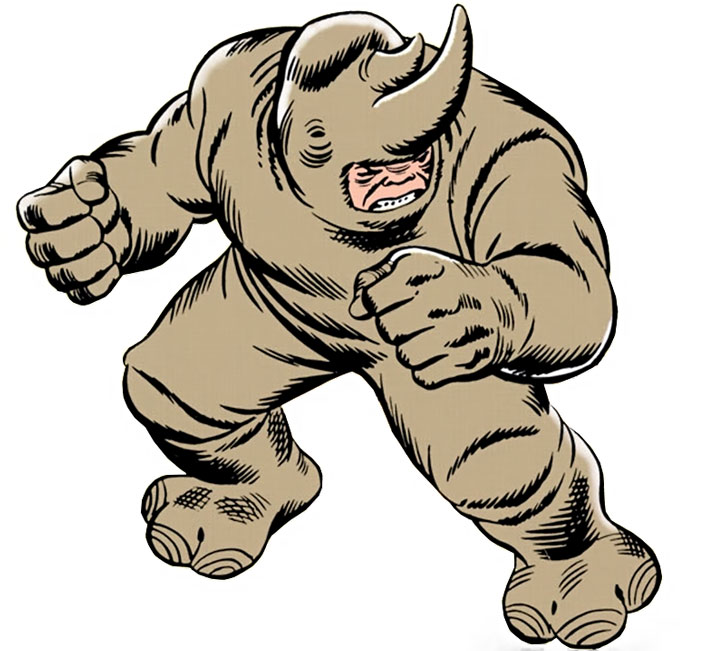 Lured by delusions of grandeur, small-time enforcer Alex O’Hirn (not his real name, as was learned many years later) accepted a lucrative offer extended by a pair of foreign operatives. Believing the brute’s muscular physique and low intelligence would ensure his loyalty, the spies hired him as the subject of an experiment they hoped would produce a superhumanly powerful assassin.

O’Hirn submitted to several months of chemical and radiation treatments that ultimately granted him extraordinary strength. Specialists also developed a material of incredible toughness and coarseness, akin to the hide of a rhinoceros. Using this they fabricated a skin-tight suit of armour for their new agent. 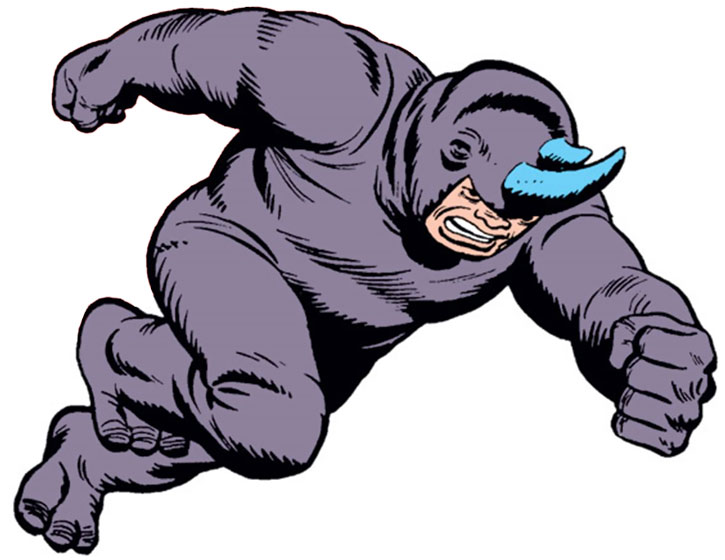 The Rhino was ordered to abduct John Jameson, son of Daily Bugle publisher J. Jonah Jameson and an astronaut in the U.S. space program. The spies sought to hold the younger Jameson for ransom to the highest-bidding nation. However, the Rhino’s new sense of self-assuredness prompted him to turn on his employers and destroy their headquarters.

He then attempted to kidnap Jameson on his own. The wall-crawling super hero known as Spider-Man intervened and defeated the Rhino, who was placed under heavy sedation in a special state corrections hospital.

The Rhino escaped custody after only a few weeks, during a period of clarity between doses of sedative. He sought out Spider-Man, intent on exacting revenge for his earlier incarceration.

The wall-crawler defeated the stampeding super-villain with a specially formulated version of his web-fluid. This variant contained encapsulated acid pellets designed to dissolve on contact with air. The altered webbing rendered the Rhino’s costume weak and brittle, depriving him of needed impact resistance. He was recaptured, tried and convicted. 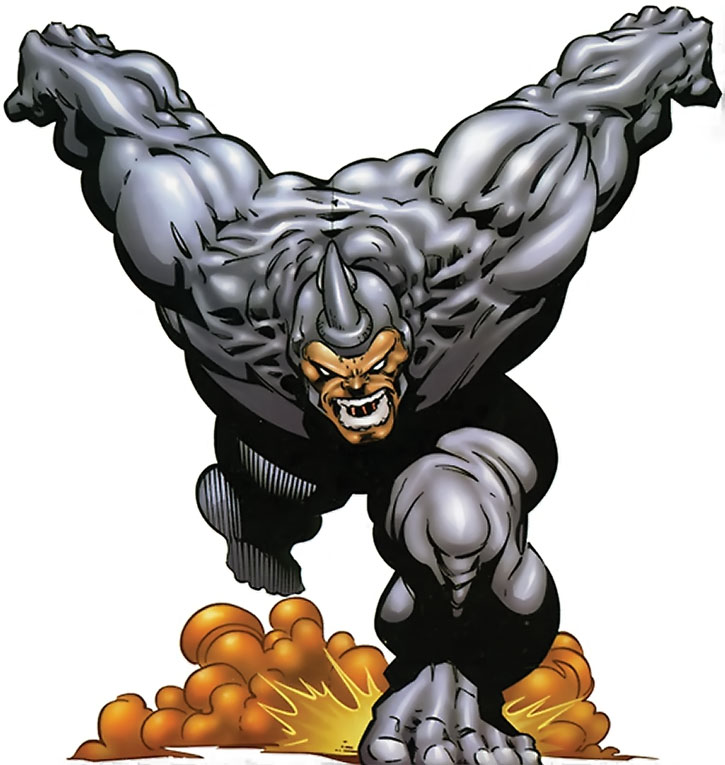 The Rhino was discharged after serving a commuted sentence. The spies who had created him, apparently bearing no malice over his previous betrayal, approached the man-mountain upon his release. They offered to augment offer to augment his strength through a process involving gamma radiation. Also, they had devised an improved, acid-resistant rhinoceros suit.

With no prospects of gainful employment, the Rhino accepted.

The new round of radiation treatments successfully boosted his previous strength level. The Rhino’s new mission: abduct Dr. Bruce Banner, an authority on biophysical gamma-ray experimentation…and the mean, green engine of destruction known as the Hulk. The spies planned to coerce Banner into developing an army of gamma-irradiated, superhuman assassins.

When the Rhino attempted to abduct Banner, the scientist transformed into the Hulk and overpowered the battling behemoth. Again, the Rhino was remanded to a high-security state facility, where he was kept under heavy sedation.

The Rhino’s battle with the Hulk piqued the interest of the gamma-irradiated super-genius known as the Leader, one of the green goliath’s foremost adversaries. The Leader determined that further gamma-ray treatments would grant the Rhino the power required to overcome the Hulk.

Freed from the state facility and newly empowered by the Leader, the Rhino was dispatched to crash the wedding of Banner and Betty Ross. An enraged Banner transformed into the Hulk, and the Rhino’s comatose form was found soon after. Later, the Leader used mental energies to take control of the Rhino’s body and pit him against the Hulk aboard a space shuttle. 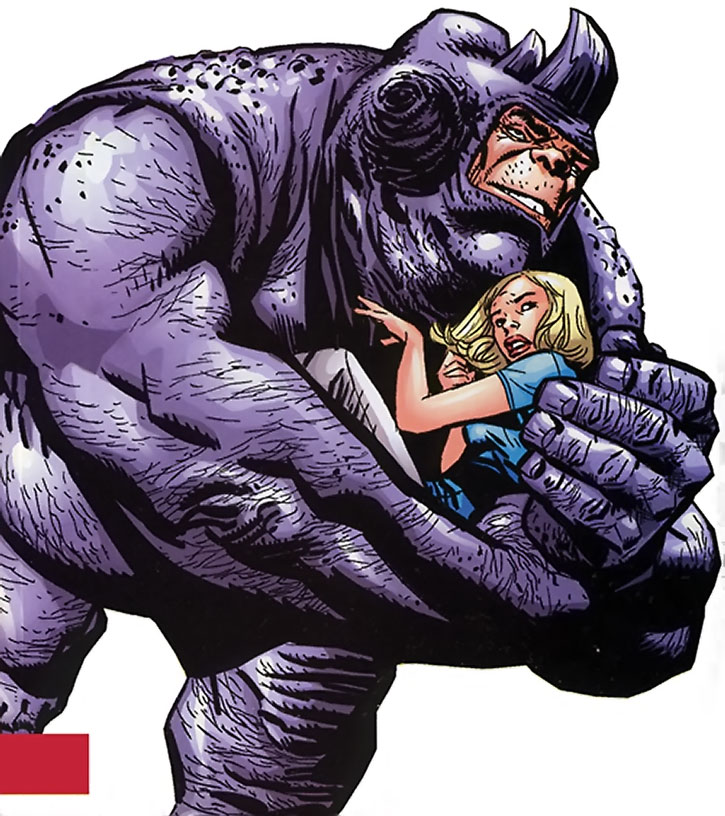 When the ship crashed to Earth, the Rhino lay buried for some time. Discovering his suit had been affixed to his skin during the fiery shuttle crash, he sought the assistance of the scientific organization called Project Pegasus. When the treatments failed, the Rhino resumed his criminal career to further finance his medical care.

A specialist finally removed his costume, after which the Rhino commissioned a new suit from the scientific team of criminal financier and industrialist Justin Hammer. Since then, the hard-charging brute has menaced society on several occasions. He was most often seen with the Sinister Syndicate, a group comprised of Beetle, Hydro-Man and Speed Demon.

The Rhino is, of course, huge. Several versions of the costume are illustrated on the right.

The Rhino is your basic not-too-bright muscle man. He’s not particularly evil, but he’s always been a criminal and he’s extremely gruff and stubborn.

The Rhino knows but a few trick, and if operating alone will stick with what he knows : kidnapping schemes for ransom.

The Rhino is a classic part of the MU, but had very little actual impact on it, aside from providing a big tough opponent to brawl with or outwit. He could thus be brought to the DCU, althought he’d probably not win any fight there too. 🙂

Bonuses and Limitations:
Growth and Density Increase are Always On (-1) and have been factored in his stats and powers.

Equipment:
COSTUME [/BODY/ 14, Invulnerability 12, Bonus : has a light protective facemask which can incinerate Spider-man’s webbing on contact (5). Note : while the first costume had an Attack Vulnerability toward acids, this weakness has been done away with.] 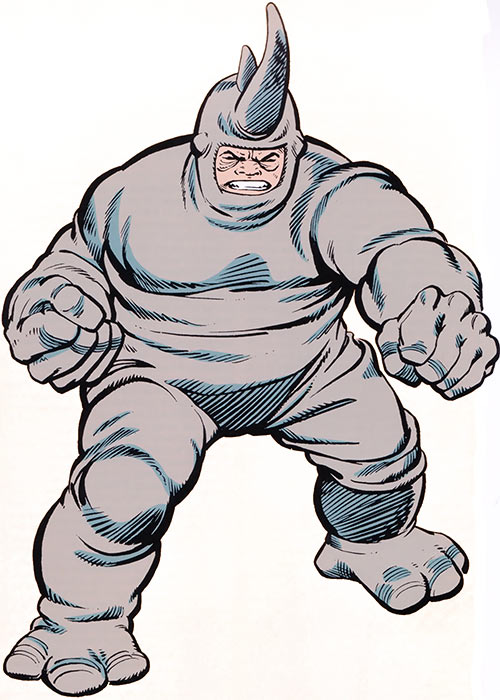 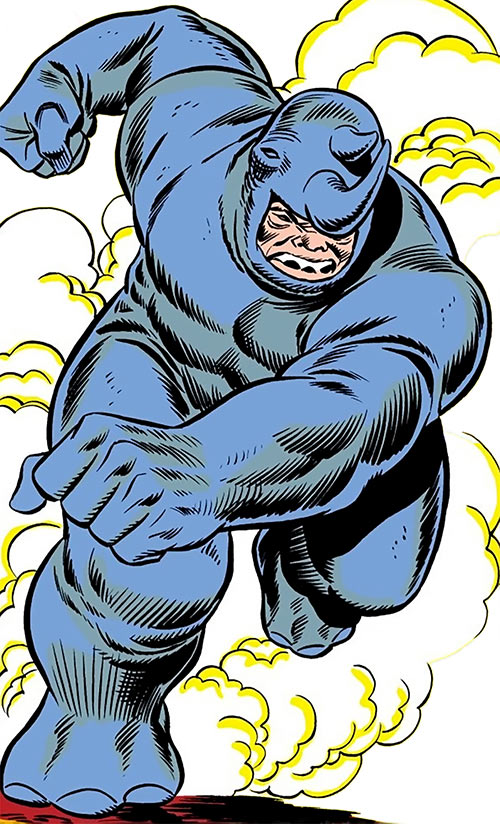 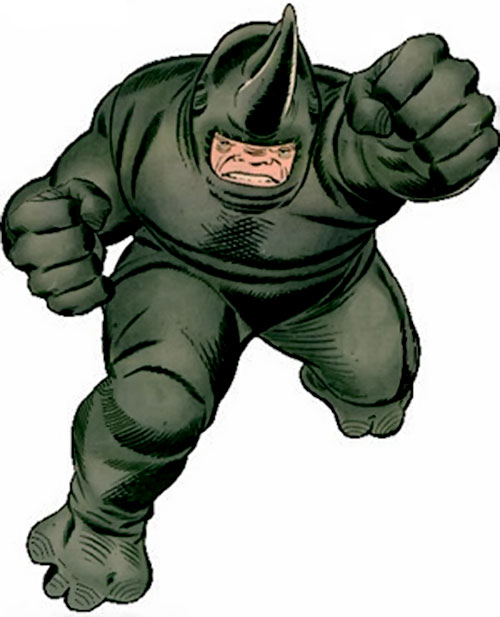 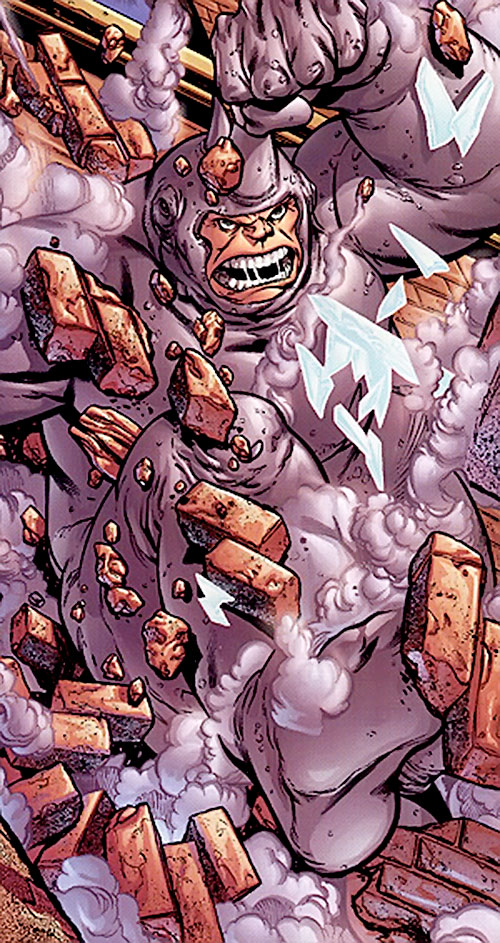 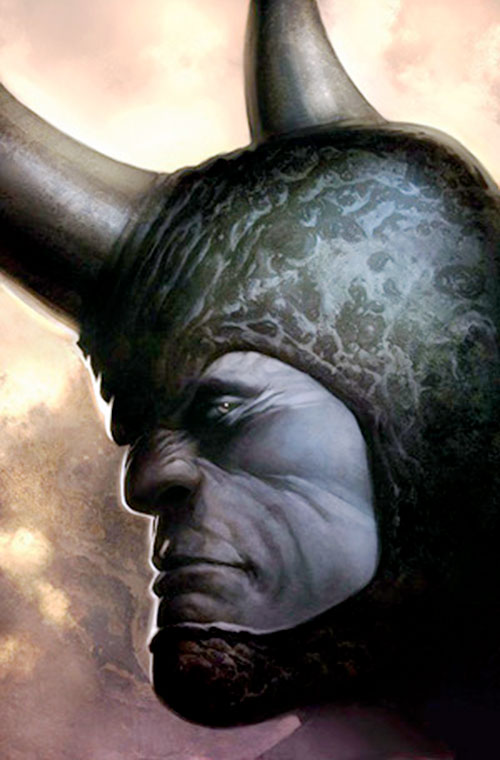