For context, you should first read the character profile for Rancor. And reading the Guardians of the Galaxy of the 30th century team profile wouldn’t hurt.

The exact nature of Rhodney’s mutant powers are uncertain. But his green skin clearly marks him as a mutant.

It’s likely they were either something of little use in combat, or that they somehow power his Kinetic Retro-Blaster. This is a flying harness which also fires a blast of force.

Over time the number of mutants dwindled as more and more of the births resulted in baseline humans. The mutants became an elite ruling over the humans with an iron hand, with Rancor the undisputed leader of the mutants.

They were soon contacted by the Guardians of the Galaxy. They had just located Haven, while searching for the long-lost mutants.

Rancor and her lieutenants were suspicious of the newcomers but met with a few of them. When they discovered that other Guardians were meeting with the underground resistance, Rancor attacked them, ordering the mutants to put down the revolting humans.

In the attempt to quash the rebellion, Rhodney was shot and killed by the Guardian of the Galaxy, Charlie-27.

A sadistic bully much like the rest of Rancor’s Lieutenants.

He was in a relationship with Bat-Wing, and the pair would often go looking for humans to pick on.

A number of the more powerful escaped, but the others were left. When events on Earth caused the influx of new immigrants, they were completely isolated. A society developed with the super-powered becoming the ruling class. This continued down the centuries, even as the numbers of the powered diminished. 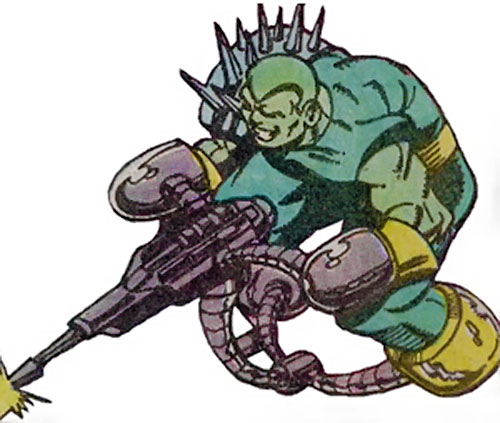