He’s a decent brawler. But most of his successes in this area rely on being more determined and ready for violence than the other guy. In DC Heroes RPG terms, he has more Hero Points  rather than good stats.

Fell’s genre is chiefly about investigation. Thus he mostly uses deductive and social skills to work. He’s good at conversation, relating, and inspiring trust. His key talent in this area is his mastery of neuro-linguistical programming.

Since this is a comic book, his NLP experience allows him to accurately read posture, preferred sensory approach, tone, attitude, other non-verbal communication cues, etc.. Then he can use this information to manipulate, destabilise or establish rapport.

He’s also good at using this information in his guessing games. Fell will use numerous small clues about somebody to guess a whole lot about them. Though these guesses sound startlingly accurate to the uninitiated, they are actually pretty simple when explained. The whole trick is to know what to look for and what to compare it to.

With comic book NLP, Fell could even draw numerous conclusions about a person he was talking with on the other side of a door. The detective appraised his emotional state, movement, distance from door, etc. This was coupled with what seems to be an excellent sense of hearing.

Fell always carries a digital camera and takes a lot of shots. He really likes having plain, objective, fixed pictures of things. He must have entire HDs filled with photos of everything and nothing. Having a number of photos about the case can also, of course, be quite useful for an investigator.

Snowtown is a fictional city next to what I assume is the Atlantic – though it could be the Great Lakes. It is on the other side of a bridge to a much better-known and prosperous city.

Snowtown is a failed city, in the sense of a failed state. It has become feral – police presence is below minimal, public utilities are not guaranteed by many means, health care is practically non-existent, there are very few jobs to be had, drug use is endemic, and the average mental health of the residents is mediocre at best.

Anything can and does happen. Nobody cares and there is little social order. The entire town is filthy, depressing, malodorous and deeply mired in poverty and despair. There are roving packs of once-domesticated dogs and most stores are closed.

Snowtown is largely ignored, and not evoked in polite company. There are tenuous links with the outside world, but the overwhelming majority of the population is caught in the poverty trap and could never hope to get out. Getting anything to eat beyond cheap frozen processed food is not a common experience. The other side of the bridge might as well be another planet.

Given the lack of recourses and hope, the residents of Snowtown have developed a ritual. They paint a red tag of a crossed-over S. This is protective magic. The town is seen as an evil god that strikes outsiders, and the tag is intended to make the town recognise the place or person as one of its own.

Most buildings and apartments bear the sigil, and many locals also bear it as a tattoo to ward off the spirit of Snowtown. This is a serious, widespread religious belief in the city.

Snowtown is also a place where all the really weird and atrocious crimes Warren Ellis comes across during his research can and do happen. They form the basis for most cases Fell investigates.

There is only one police precinct, covering the entire town from one precinct house. It is commanded by one Lt. Beard, an old and obviously insane and depressed man. As he often mentions, Beard has but three and a half detectives for the whole town (the fourth has crippled legs).

In the DCU Snowtown could be many places – Hub City, Hell’s Reach (in Washington DC), Vanity or even a corner of Suicide Slum in Metropolis. An area of Gotham that was never really rebuilt would also work fine.

In the Marvel Universe, its location would be the same as in the Fell series.

I know I already used this tune as the soundtrack for the Katharsis character profile. But look, it’s a classic.

Much of Fell’s background is a mystery. Back over the bridge, he was with the Major Crimes Unit, and apparently considered a solid detective. Then something undisclosed happened. It would seem that Fell closed a major case, but at the price of a grave fault.

This may be related to what happened to his partner. Said detective was seen in an hospital ward with a severe short-term-memory loss condition.

The situation was such that the PD would not fire him, but could not keep him either. He was transferred over the bridge. The idea was that he would lay low for a few years to let the heat pass. Whatever happened, Fell simply cannot set foot on the other side of the bridge anymore, possibly under threat of death.

There’s still crime in the city

However, Det. Fell negotiated special arrangements with the commissioner downtown. He has pretty much carte blanche  about what he does in Snowtown. One of Fell’s perks is that he’s free to work without a partner. This might be out of guilt about what happened to the man seen in the hospital.

These atypical arrangements imply that the commissioner felt that he owed Fell for whatever was happened, but that even his protection was insufficient for Fell to stick around.

Fell established himself in Snowtown, solving a weird and disgusting murder case before he even unpacked his furniture. As one of the three-and-a-half detectives in town, Fell is investigating a number of deranged criminal cases.

Fell usually operates in a middle-of-the-range suit, often of a deliberately dated cut.

He carries his pistol in the small of his back, and has the Snowtown tag branded on the right side of his neck.

Fell is a largely solitary man. He has stared into the abyss for far too long and seems well on his way to becoming a monster.

He reminds me of a frequent saying in the police when it comes to applicants. “Those who apply out of idealism will usually be the first to burn out and will become very, very bitter — perhaps crooked.” Fell was and may still be an idealist – he’s obviously after justice, not law.

He’s steadily sliding toward becoming a vigilante with a badge and a gun. Furthermore, he seems to be watching his own descent with detachment and perhaps some passive approval. How the way of a man who hates injustice and evil tangles with the way of a professional police detective is strange to witness.

Those are strange circumstances, after all. Fell is in a feral city where the law has little sway, he works without a partner, and is protected by a complicated and unusual arrangement. Nobody really cares about what he does in Snowtown, and what happens there almost certainly will stay there.

Fell seems to be angry about life’s injustices and the way life and the system routinely ruin lives and hopes. Increasingly, he simply cannot stand it, and has to bring back a degree of justice that keeps drifting further away from law.

He particularly hates exploiters of misery, such as pimps, whom he will often assault. He knows that no pimp ever pressed charges for getting beat up by a police detective.

Fell is very smart and analytical – a level of intelligence and a power of observation found in movies and novels more often than in reality. However, he has reached the point where this is becoming a problem for him, though.

He’s so used to being the smartest, shrewdest, most observant person in the room that he tends to routinely underestimate people who are not as smart as he is – but know their job.

The real Fell does not do well with people who dislike intellectuals. But most of the time Fell will be mirroring the attitude, tone, subjects, etc. of the person he’s discussing with, making his real self irrelevant.

Fell is curious and likes understanding things and putting stuff together, making him a natural sleuth.

He enjoys finding out about secrets and making sense of things, assembling a coherent story from disparate clues. His wish to have things make sense and use his intelligence to conquer them might be related to his desire for justice.

Though he’s quite driven and a bit of a workaholic, Fell has an easy-going, almost placid attitude when it comes to his personal life. He sort of drifts around, meeting people at random and having stuff happen.

As a private individual he just seems to be nice, open-minded, easy-going and a good conversationalist. This is in part because his NLP work has become second nature.

Fell is sort of, kind of dating Mayko, a strange and neurotic Vietnamese-American barmaid and bar owner. Mayko is very interested in Richard’s work and occasionally accompanies him on investigations.

“Your eyes are a little glassy. Diazepam ?”

“I know what you’re hiding. It took me a while, but I worked it out.”

“Three floaters a week, Lt.. That’s a hundred and fifty murders a year we just ignore ? One time. One time. Let’s catch one of the bastards.”

(Talking to the city after arresting a guy outside of any due process) “You hear that ? Every time you take one [victim]… I’m going to take one back.”

Bonuses and Limitations:
Direction Hearing is a Skilled Power. 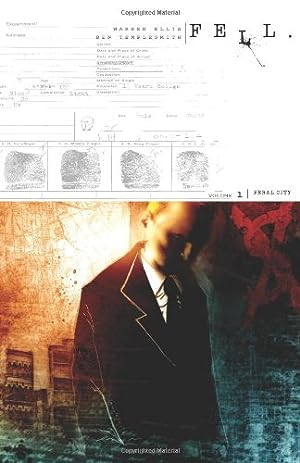 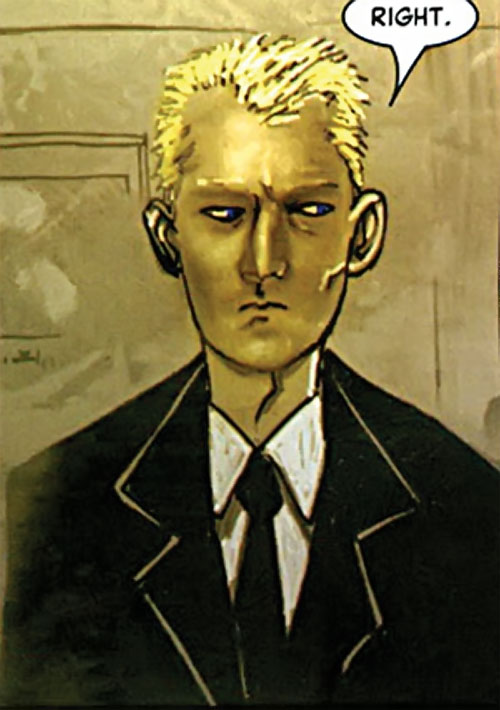 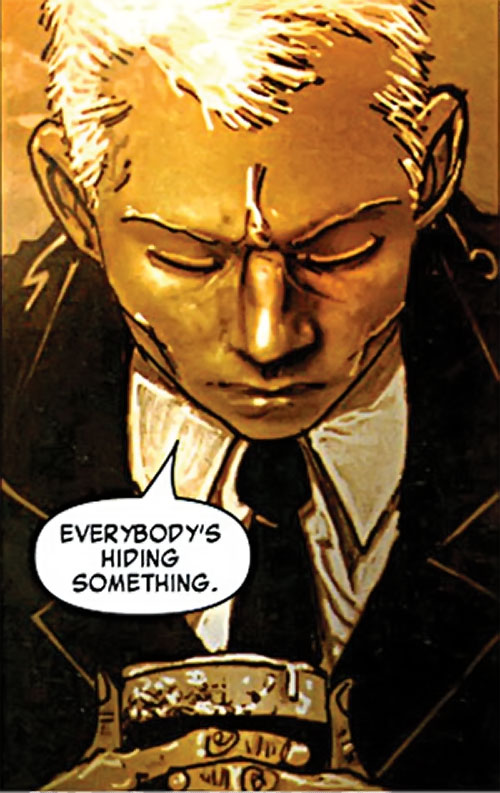 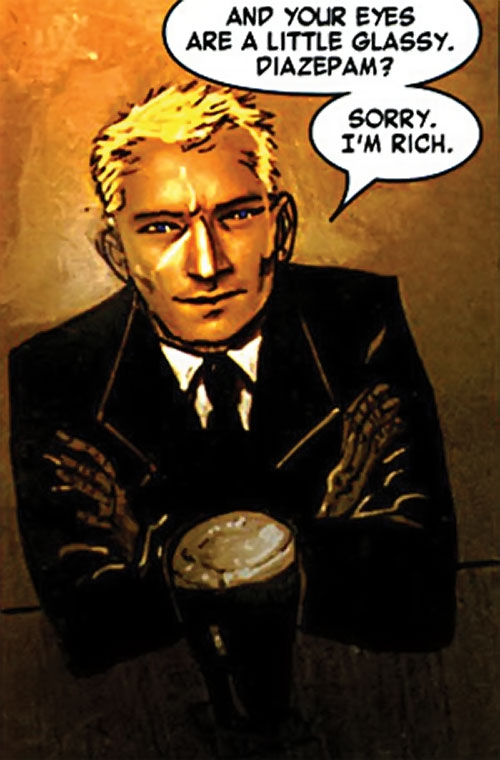 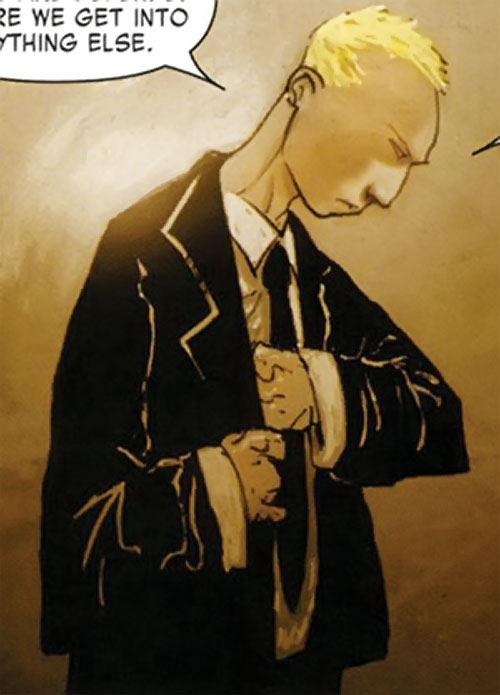 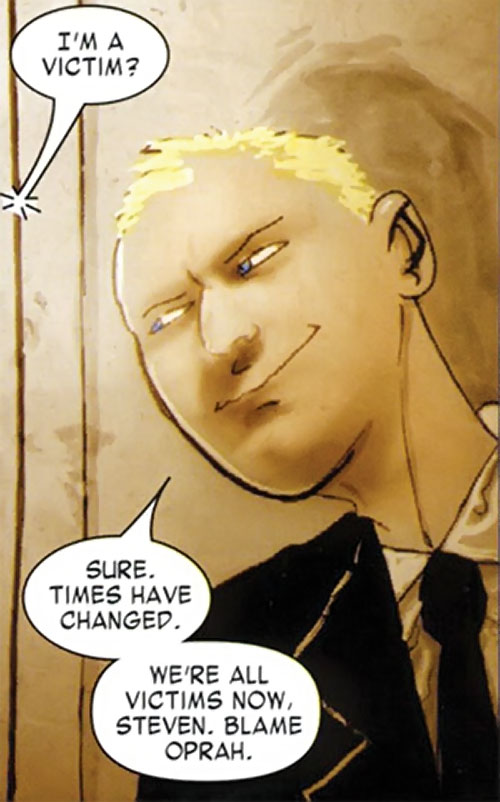 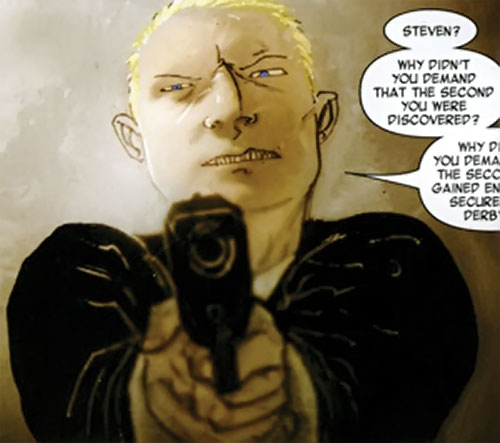