This profile only discusses the Silver AgeSuper-hero comics from the late 1950s to the early 1970s. version of DC Comics’ Rick Flag.

Our other articles about the Suicide Squadrons and the Suicide Squads mostly discuss a reconstructed version. This continuity was created by writer John Ostrander during the 1980s – just after the Crisis on Infinite Earths.

By contrast, this article is about the version of Rick Flag that existed before the Crisis. There’s just enough material for a writeup.

As such he’s not just an ace who can fly anything. He can be assumed to possess almost any military skill from any branch of service, or any action skill.

He’s also a well-educated officer, and can follow the science stuff without difficulties.

Flag is an extraordinarily courageous, determined and resourceful man. He embodies the defenders of the Free World™, the Greatest Generation that triumphed forever against tyranny, and all that. 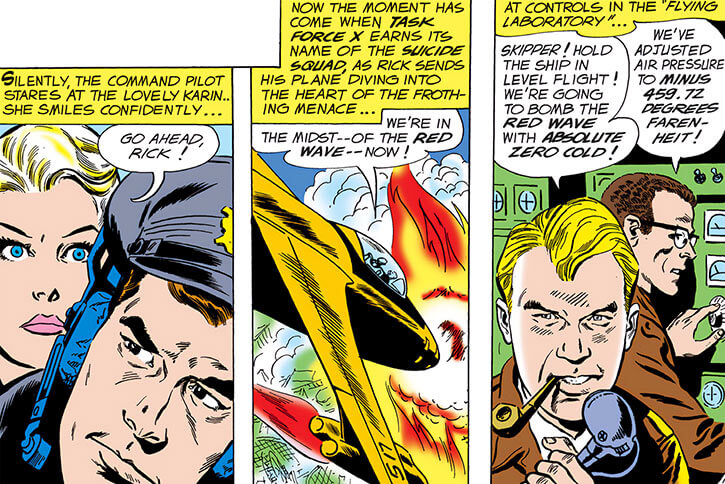 He was the sole survivor of his squadron after a spontaneous suicide run to sink an Imperial Japanese aircraft carrier. This experience shaped him into a unusually determined serviceman.

This Suicide Squad handled a number of strange menaces in 1959 and during the early 1960s, then vanished.

Flag presumably was born circa 1925, and was about 17 when he enlisted.

Howbeit, his aging seems to inexplicably stop circa age 30. He seemed to remain in his early 30s from the mid-1950s until the Crisis on Infinite Earths. At which point, this version of Rick Flag ceased to exist.

For the adventures of the 1960s Suicide Squad, you can refer to our Silver Age Suicide Squad article. It uses the Ostrander-revised continuity, but we worked to describe the missions themselves to be as close as possible to the published material. 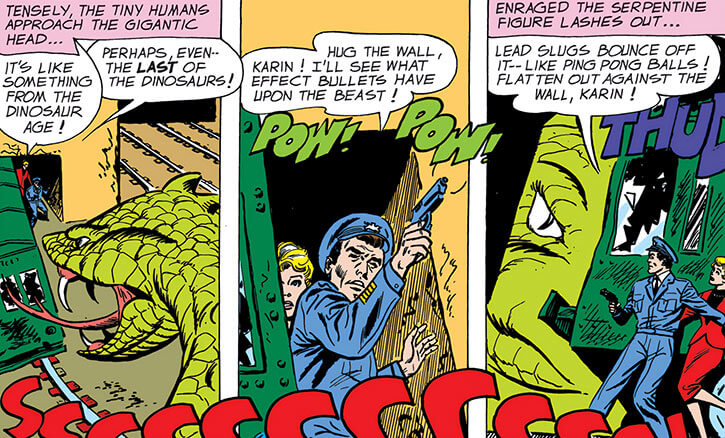 We learn that the Suicide Squad was disbanded after discovering a strange golden temple in Cambodia. They are apparently forbidden from talking with each other.

Rick Flagg joins a motley crew called the Forgotten Heroes to investigate the conspiracy that protects the secret of the golden temples.

(The Forgotten Heroes are mostly drawn from 1960s anthology DC Comics, such as Showcase or The Brave and the Bold. They featured in adventure stories, but these fell to the wayside as super-heroes proved to be more popular).

The Heroes investigate the golden temples, and foil a plot by Vandal Savage to kill Superman. However, the Crisis on Infinite Earths occurs.

The DC Multiverse is thus destroyed and recreated. In the new realities, things are different. In particular, “Rick Flag” becomes two different characters :

Flag is almost always clad in his military pilot uniform.

He’s a prim, proper officer – though his hat and hair are not always worn to proper regulations to mark his status as a pilot.

The other Squad members frequently address him as “Skipper”, as per tradition.

Flag is the brave military man, the fearless commander, the daring pilot, the intelligent and clear-eyed serviceman who saves the day.

Like all Suicide Squad members he’s brave and dedicated to the point of self-sacrifice. Rick is determined to serve even though that will eventually mean death.

Like all Squad members he’s a calm, competent thinker. He works well under pressure and faces enormous odds without flinching.

The circa-1960 Suicide Squad are very much the Lawful Good champions of the Free World™. They are not pointlessly violent, only kill monsters and people about to kill innocents, raise money for charities, fight for world peace, etc.. 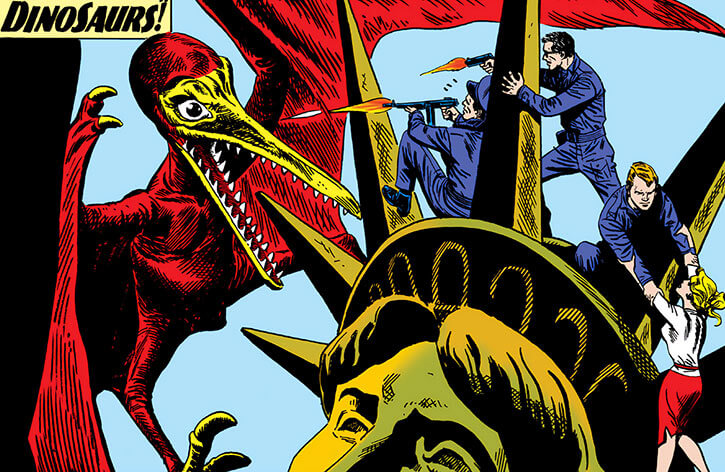 Squad members were driven by an unusual sense of Responsibility, though in practice their actions were of Upholding the Good sort. They felt personally, deeply responsible for carrying on in the name of their comrades after terrible tragedies.

No Squad member made attempts to rationalise away, forget or shirk what had happened. They all accepted a life-changing, 24/7, to-the-death duty ever since.

In the original Forgotten Heroes stories he was cast as something of an establishment man and conservative. But later flashbacks depicted him more as a burnout who no longer cared. He just did his job with something of a death wish.

“I can’t get altitude ! We’re still heading down ! We’ve one chance in a thousand ! We have to bomb off the turbulence around us ! Release the first stick !”

“Go on and ready the ship for an immediate take-off ! You’ve got to figure out how we can combat this new threat ! I’ll try to hold it back !”

“We can’t [attack] — until we have positive proof that the Wolf country is going to attack first ! That’s always been the American way !”

“With a weapon like that at our disposal — no one would dare to start a war ! It could be the best argument for peace !”

“Never thought we’d be trying to save a whale from a flying dinosaur ! Ready on fire lever one, Karin ?”