The Riddler’s henchmen are all tall and muscular – they are serious bodybuilders.

All wear black coveralls with chrome buckles over boxer shorts, leaving their arms and part of their torso bare. Their hair are almost entirely shaved, saves for a sort of spitcurl on the front styled like a question mark.

They have a small version of the trademark green question mark of the Riddler tattooed on their biceps.

Usually they are the strong, silent type, standing there looking all tall and scary with crossed arms.

Your standard gang dude at the gym in a bad part of Gotham. They tend to be actually loyal toward the Riddler. He’s not a great leader, but he’s not a henchmen-murdering psycho either and he apparently pays okay.

The brawny henchmen are pretty disciplined and experienced for goons.

“Awwww c’mon, sir… This is our video break ! Y‘gotta let us watch something !”

Connections:
Underworld (Low), Riddler (Low). Some may have Echo and/or Query as Low Connections.

Equipment:
On some operations, the henchmen are armed with common firearms – usually revolvers and pump-action shotguns, sometimes a few submachineguns. 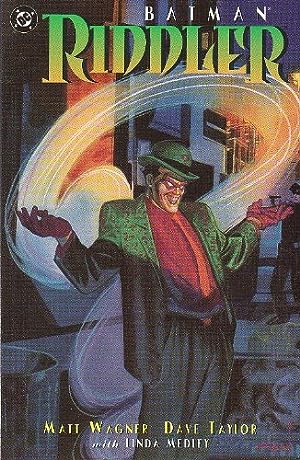 Batman: Riddler and the Riddle Factory by Matt Wagner