This obscure character was only seen in one issue of Night Man, in late 1994. This book was taking place in the Ultraverse’s Malibu’s since-defunct then-new super-heroes setting.

Rigoletto patterns himself after the opera character. Rigoletto is a major Verdi opera, which premiered in 1851. It is also the name of the hunchbacked court jester, who has the central role in the story.

Edward Robinson was a young and successful mining engineer. However, he got caught in a mining accident. He survived, but with a few fused vertebrae, making him a hunchback.

His wife left him, but his little girl remained with him, unfazed by his deformity. Ginger was his pride and joy, but then became a young woman and left the small town to move to Francisco.

While working as a waitress in San Francisco, Ginger was killed by Deathmask. He cut her face off to wear it as a mask. That also was the Night Man’s first case. His failure to save Ginger Robinson kept haunting him and spurring him into becoming a better crimefighter.

Edward saw his daughter come back from Frisco in a box. Despite his friend’s attempts to stop him saw the corpse. He then became quite mad.

He came back as Rigoletto, as he felt that his plight mirrored the tragedy of the well-known jester. His goal was to make the city of San Francisco, which had killed Ginger, pay.

He assembled a small band of goons. Using his knowledge of explosives, he struck at city monuments, municipal government buildings, and the wealthiest parts of the town.

The Night Man ultimately stopped him, by talking about the guilt and pain they shared over Ginger Robinson’s death. But one of Rigoletto’s bombs killed city supervisor Gonzales, clearing the path for corrupt city supervisor Arlington.

Rigoletto is mad with pain and grief, and considers San Francisco to be his personal enemy.

He sometimes quotes the opera.

Equipment:
Wand with a jester’s head [BODY 02, EV 07, Grenade drawback, can only be thrown].

Rigoletto surrounds himself with about a half-dozen muscular thugs during his raids. They all wear a distinctive costume with gray pants, boots, gloves, a grey wool cap, and a yellow spandex T-shirt with a grey lightning bolt across it.

Equipment:
None, they fight hand-to-hand. 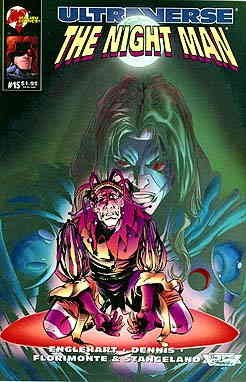