The Skritt are a species of rat people in the Guild Wars 2 video game. This profile is about a specific Skritt (who may be my favourite GW2 Non-Player Character ) but really it’s an excuse to profile this interesting species.

Though this profile refers specific Guild Wars places and events, these specifics aren’t important in following the explanations. It’s mostly there for those familiar with the setting.

This is 1080p, SweetFX-enhanced footage of the Rikkiti escort quest. It lasts for about 8½ minutes to have most of her funny dialogue and exclamations.

I hadn’t played in a long while — which is quite visible in the footage, so don’t laugh.

Rikkiti is an unusually sharp and serious Skritt. Admittedly, that’s not saying much. But even alone she’s about as smart as a 11-year old Human, and she can more or less do a job without wandering off. She’s also an excellent runner – an important quality for a Skritt.

Rikkiti is the sort of Skritt fighter that Asura call a “lobber”. That means that she throws glass bottles filled with a variety of junk and unstable chemicals. Explosions, acid, shrapnel, sticky substances and other unpleasant effects follow. These are not tremendous, but it’s about as bad as being knifed.

Skritts are very strong for their size, and Rikkiti can thus throw her stuff at distances that would warrant a baseball contract with a minor league.

Skritts are one of the minor subterranean races that lived under Tyria, and seldom had contacts with surface species.

They are small humanoids (maybe 4’5”) and reminiscent of bats, though they do not have wings or even the suggestion thereof. Those not familiar with bats are more likely to call them “rat people”.

No Skritt history is known, but they used to clash with Asura all the time (see our Zojja profile for a primer about the Asura). Asura were determined to exterminate Skritts, which they saw as a subsapient pest. But the Skritts breed rapidly, and invading large Skritt colonies is a very dangerous proposition.

When the Elder Dragon Primordus awoke (see our Eir Stegalkin profile for a primer about Elder Dragons), the Skritts were assumed to be among the underground civilisations that were eradicated.

However, years later, small nests of Skritts started popping up in the surface world. Soon they were found in areas relatively close to Rata Sum (the new Asura capital), the Black Citadel (the Charr citadel) or even Divinity’s Reach.

Skritts are generally lazy ne’er-do-wells, and on average are careful not to put too much effort into what they do. They run only the most basic activities, such as sloppy mushroom farming. They pick places to settle that require the least amount of work – almost always caves.

However they are greedy and have a hoarding instinct. This means that they’ll pilfer everything that’s not riveted to the floor, and will steal and beg from neighbouring settlements.

Skritts particularly want food and “shinies”. “Shinies” doesn’t mean baubles, though. Skritts are pragmatic and good “shinies” will be weapons, tools, technological items and coins with which to barter. They seem particularly fascinated by golems, though you can’t usually steal a golem.

Skritts do not appear to have formed religions, but they occasionally build small idols which may indicate animist beliefs. Or perhaps they are emulating something they saw another civilisation do. They also don’t have social organisations, such as leaders or classes.

Most Skritts can speak the common tongue, albeit with a small vocabulary and mangled grammar. It can on occasion be difficult to follow what they say… but it’s not because they’re stupid. It’s because their own language is *far* superior.

Skritt communication sounds like random rat noises. But it is actually the most efficient and sophisticated language of Tyria. Skritts can hear a much broader range of frequencies than Humans do, and their tongue uses this entire bandwidth.

Skritt squeaks, most of which are inaudible to other species, can thus convey an incredible amount of information within seconds. Furthermore, it would seem that numerous Skritts can all speak and listen at the same time, perhaps by using different ranges of frequencies.

Individually, Skritts are stupid and easily confused. However, they are really good at putting their small minds together. And their language allows them to do that with a hivemind-like efficiency as they all suggest ideas and debate at a superhuman speed.

The more Skritts are pitching in, the smarter the deliberation gets. And a large colony can have genius-level IQ when taking collective decisions (though the noise will be unbearable).

This is particularly effective when a Skritt has “found” an unusual shiny. The other Skritts will naturally be interested and discuss it, and if the colony is large enough that means a lot of brainpower thrown at understanding what it does. In DC Heroes terms, a particularly large colony might reach 7 APs of Gadgetry (Identify Gadget) and Occultist (Identify Artefact).

To their dismay, the Asura have long since learned that weapons stolen or captured by the Skritts will be efficiently analysed and understood. Once the congress has broken up, individual Skritts will retain a hazy memory of the discussion since they are back to their small-scale intelligence. But decisions have been taken and will be carried out.

Rikkiti (presumably a Kipling reference ) is a Skritt in the Metrica Province, the territory to the immediate North of Rata Sum. Though the Asura mostly apply their zero-tolerance policy toward Skritts found there, there are research teams in the Metrica Province — chiefly the Brill Alliance krewe — who do not kill Skritts on sight. Instead, they are engaged in a large project to study Skritt intelligence.

In recent years the Lionguard — the military of the city of Lion’s Gate — has been building additional small forts to secure the trading route to Rata Sum. One such stronghold, the Arterium Haven, is in the Metrica Province.

At the trading fort

Perhaps inspired by the Brill Alliance the fort’s commander, Sheriff Kol, has recruited Skritt auxiliaries to free up her guards for patrols.

These Skritts are mostly issued blunderbusses and kept as static guards at the fort. There are too few for them to have much intelligence, but their hoarding instinct keeps them on the job and it doesn’t involve much effort. So far the Skritt have been fairly helpful in repelling raids on the supplies at the fort, chiefly from the neighbouring Cuatl tribe.

Rikkiti is apparently the brightest such auxiliary. Kol employs her as a runner to communicate with her guards in the field. This is not always working out, though, since a lone Skritt runner runs significant risks of being attacked (including by Asura locals)… or distracted by “shinies”.

Rikkiti is very enthusiastic – even hyper. She is eager to help the Lionguard. Presumably she is looking forward to her next pay, since very few Skritts earn a salary.

She certainly doesn’t shy away from violence, and seems to consider that the best defence is a good offence.

Some of her remarks imply that she shares the Lionguard’s ethos of protecting commerce and providing safety to travellers. Presumably the Lionguard explained the job to assembled Skritts who thus understood it fine. If so Rikkiti remembers liking the concept from this discussion though she cannot process the subtleties when she’s by herself.

(Excitedly rummaging through a raptor nest for some unlikely loot) “Stuff stuff stuff !”

Asura Deputy: “And did our esteemed sheriff suggest a specific course of action to reclaim said purloined goods ?”
Rikkiti: “Yes ! No. What ?”
Asura Deputy (sighs): “Sheriff says how we get shinies back ?”
Rikkiti: “Deputy talk like Rikkiti stupid ! Rikkiti not stupid !”

Drawbacks:
Misc: as a Skritt, Rikkiti often faces hostile reactions from Asura and others.

Equipment:
Rikkiti carries a bandoleer of bottles filled with… stuff, which she uses as grenades. Charges include : 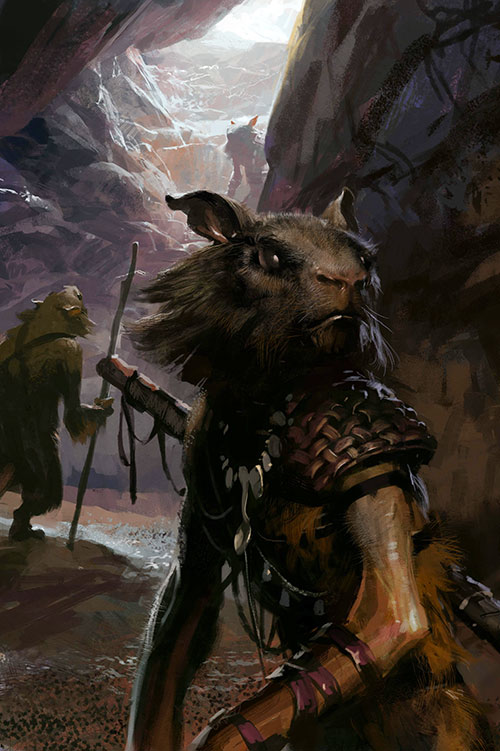 A key for the GW2 Heart Of Thorns expansion
Advertisement