Rikku is an Al Bhed. These are people who are considered heretics in their world because they use forbidden machines.

She is highly proficient with machinery of all sorts in a world that is generally ignorant of its use. Rikku typically works as with a group of treasure hunters who scour the ocean for lost technology.

She is highly effective in the water and has also acquired several skills useful in her treasure hunting profession (namely thief skills).

15 years old in Final Fantasy X, Rikku is the daughter of Cid, the younger sister of Brother, and a cousin of Yuna. However, her mother never appears in the game. She was killed by a rampaging machina some time after Rikku’s birth.

Rikku wanted more siblings, which was made impossible by her mother’s death. Thus, she plans to have lots of children when she marries so that her children will never have to feel alone.

Rikku also suffered from severe astraphobia . This is a result of her brother accidentally hitting her with a thunder spell when they were younger. He was trying to target a fiend that was attacking her. This fear became apparent in her apprehension about traveling onto the Thunder Plains. She remained stricken with panic-induced agitation during the journey across those lands.

Rikku first appears in Final Fantasy X as an aid to Tidus shortly after he first arrives in the vicinity of Spira’s mainland. Their meeting takes place at an ancient Yevon temple known as “Baaj Temple.” After helping Tidus defeat a fiend, she prevents her brother and their Al Bhed comrades – who thought he too was a fiend – from killing him.

Later, Yuna and her guardians cross the Moonflow along the path of Yuna’s pilgrimage. Rikku is part of an Al Bhed team who tries to abduct Yuna in a machina, so as to prevent her from completing her pilgrimage – which would cost Yuna her life. But they are stopped by Tidus and Wakka.

Tidus finds Rikku when she regains consciousness after washing ashore. He recognizes her and learns of her role in the kidnapping attempt, but does not disclose the latter fact. After explaining herself to Yuna and Lulu, and gaining Auron’s approval, Rikku became the last member to join Yuna’s entourage of guardians.

Wakka – who was deeply prejudiced toward the Al Bhed at that time – was clueless that Rikku was an Al Bhed. This lasted until her brother tried to abduct Yuna once again, this time near Macalania Temple.

Wakka is angry about this. But other party members, such as Lulu and Kimahri, offer support for Rikku if Tidus rides with them on the snowmobiles.

A difficult-to-trigger dialogue scene between Rikku and Tidus in the HD remaster of the game.

Rikku has two outfits in FFX. When she makes her first appearance she is wearing a yellow and brown form-fitting body suit which covers most of her body except for the lower part of her face. Goggles cover her eyes. The suit seams to be armored in certain places as well and has a lot of complex buckles and the like.

Later she sheds this. She wears an orange tank top, very short green shorts with black and yellow boots. She also wears gloves and several bracelets as well as well as a leather strap for keeping her weapon (a spiked glove) on her left leg.

On the back of her tank top at the shoulders there are two large streamers hanging from it that nearly touch the floor. Her hair style is bound up into a frizzy teased top with several barrets to hold it in place. This sort of hairstyle is very fashionable in Japan as of this writing. She still wears the goggles around her neck.

Rikku’s appearance and manner are one of the three images of an ideal woman in Japan. Rikku is cute, outgoing, and fairly positive. This is the type of girl that most Japanese people (both male and female) desire to have as a sort of “little sister” either in the literal or figurative sense.

It is thought that someone cute with her attitude will attract others and that people will generally view this girl and the company that she keeps in a positive light. Thus she’s the “little sister” that everyone wants.

Her personality is perky and optimistic, although her positive nature hides her being concerned and worried. As an Al Bhed, she has suffered discrimination from the Yevonite majority. Despite this, she managed to keep a positive outlook and wanted to save Yuna from vainly giving her life with the Final Summoning.

Rikku also has something of a sibling-like friendship with Tidus, supported by their similar personalities and their deep devotion to Yuna. She actively encouraged the relationship between Tidus and Yuna, despite occasionally having flirted with Tidus.

If the player talks with her in Guadosalam, she will suggest that people their age get married because of how dangerous Spira is, implying that she and Tidus could get married. Tidus can choose to tell her that he would rather have her than Yuna. She is surprised, but says “maybe someday” in Al Bhed.

Rikku: “I wish I had some younger brothers and sisters, though…”
Tidus: “So ask your parents. ”
Rikku: “Mom died… A machina went on a rampage…”

Rikku: “When I get married, I’m gonna have lots of kids ! That way they’ll all have brothers and sisters !”

Given her diverse skills and background she could really be encountered in all sorts of roles and campaigns. I’d like to say more, but unfortunately I’m drawing a blank here at the moment.

Advantages:
Languages (Al Bhed), Popularity, Rich Friend (Cid), Shtick (mug – allows Rikku to melee attack and perform a pick pocket move on an opponent in the same round without any penalties).

Rituals:
Luck
Effect: Enchantment: 02, Power Reserve: 01.
Necessary Components: None.
Casting Time: 0APs.
Bonuses & Limitations: Adds +1 to a randomly selected Attribute/Power/Skill to Rikku and any 2 teammates within 0APs of her. 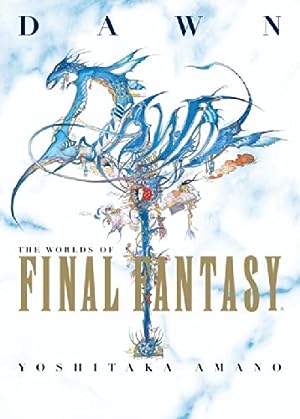 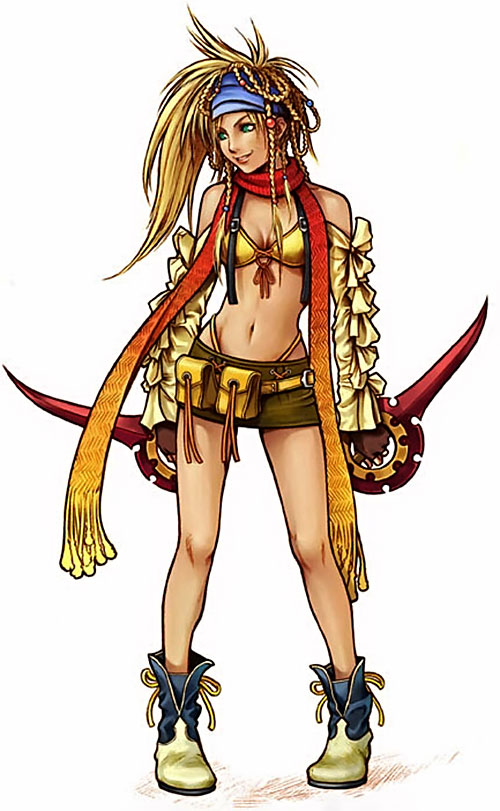 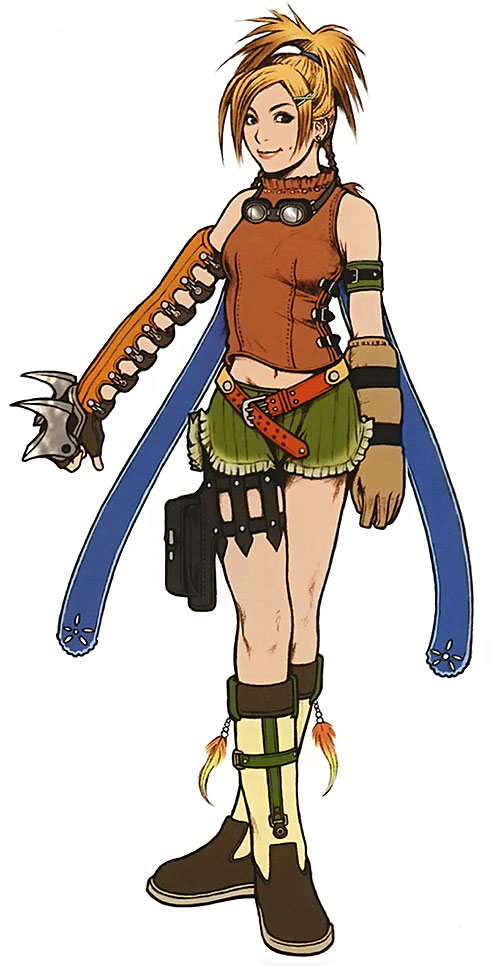