Ringleader is a good athlete, a superlative juggler and thrown weapons specialist. He’s also a solid tactician and criminal leader. Ha’s smart, well-prepared, organised and with an above-average charisma.

He prefers to juggle very sharp throwing rings. These are similar to traditional chakrams, or perhaps those used by Xena. Last once noted that at least some of these weapons could penetrate a common police ballistic vest. He also seems to carry some blunt, weighted rings for less-than-lethal shots.

See the main article about the Death-Throws.

The Death-Throws juggle almost all the time, even when discussing with somebody else.

Ringleader is a take-charge, serious professional with a keen focus on tactics and profit. His crew follows his orders unquestioningly. He’s very big on preparing every fight. This means rehearsed tactics, means of communication, alternative plans, pre-placed traps, etc.

When springing Crossfire, Ringleader relied on :

When ambushing Cap and Hawkeye, they relied on :

Catching isolated targets in a crossfire seems to be his preferred tactic.

“Twenty feet away. Everyone’s in position. I’ll give the signal.”

“As you may recall, you have yet to pay Oddball and Bombshell for their assistance during your ill-fated with Hawkeye. At a thousand dollars a day for five days each, that comes to ten thousand.”

“Objects in motion, everyone ? Switch !”

“You are surrounded and outnumbered. Each of us is highly proficient at a different deadly projectile. Throw down your weapons at once or you won’t know what hit you !” 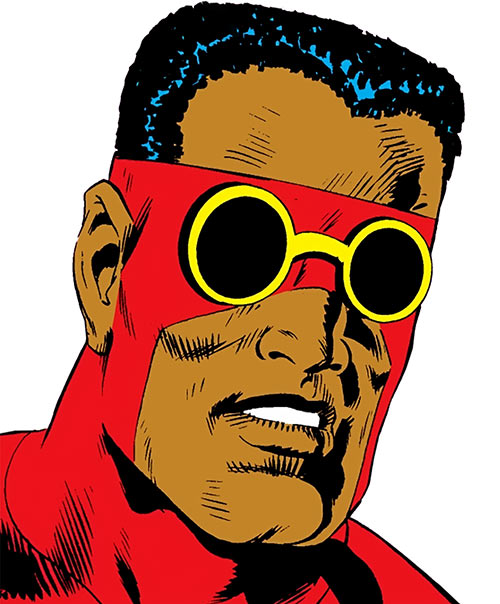