He’s no major comics villain. But the intent was more to touch on real-world abuse. And designing scenarios around his M.O. can make for plenty of good stories.

Riot Black is a large and muscular young man.

He seems to have significant brawling experience. Though he’s clearly not on Batgirl (Barbara Gordon)’s martial level, his fitness and greater mass mean that she has to work to take him down.

He has a brain implant that is essentially a high-volume hard drive. It comes with a cybernetic OS that allows him to search and organise the content uploaded in his head.

His left eye is also cybernetic. It includes a digital camera that can upload directly to his head drive, and perhaps other systems.

Riot Black also has at least basic DJ-ing skills, knows how to ride a motorcycle, and has solid online promotion skills.

On one panel in particular, Riot Black seems to have peak human or low superhuman strength. He’s presumably in the low-enhanced range.

It may be that he has cybernetic enhancements. Or perhaps he’s a minor superhuman whose constitution makes cybernetic implants much easier to install.

(I’d favour Riot Black being superhuman. If only to work around the perennial problem of “wait, but if such cybernetics implants exist in the world, it logically means that…” in superhero comics.)

In a brawl, Riot Black is held back by his preference for toying with and humiliating his opponents, particularly women. He’s also overconfident since he’s so much stronger than normal people.

Riot Black came to prominence during the early 2010s, along with many other toxic online personalities. He developed a large following on the DC Universe equivalents of Twitter, Instagram and Snapchat.

Part of it was monetised by throwing parties where he was DJ-ing. This part was lucrative enough that Riot Black apparently had his own club in Burnside, the Genuflex.

His main angle became The Black Book, an online blackmail site. Riot Black paid lowlives to dig up kompromat  , then took donations to have it published on his site. The point was to see random people exposed, humiliated and ruined. This ranged from naked pictures, to photos of badly sick people, to embarrassing secrets.

A chunk of the data came from stolen cellphones and laptops. A common scheme by Riot’s providers was to meet people on Tinder-like apps, do a single date, and abscond with their smartphone. Or just swiping laptops from people working in cafés.

As she moved to Burnside, Batgirl (Barbara Gordon) had her laptop stolen during a house party. She quickly tracked down the thief.

During her investigation, she gained a stronger sense of the impact of the Black Book on people. Thus, she decided to shut it down for good.

Batgirl confronted Riot Black at his club during a party. Then she tricked him into uploading a snapshot to his cranial drive.

Though it was supposed to be a photo of Batgirl’s unmasked face, it featured a big cardboard card with a QR code  . Scanning the code activated a custom virus which deleted the data securely held in Riot Black’s head.

(Incidentally, the QR code in the comics actually scans. But not as a virus activator.)

Ghost in the shell

Not long after that, Riot Black was enslaved by the Barbara Gordon A.I.. The program used him as a meat puppet through his cybernetic implant.

Riot Black took down Batgirl by surprise. But when she revived, she mauled him.

This and her other efforts allowed Frankie Charles to neutralise the Barbara Gordon A.I..

In 2017, Riot Black was ready to make his comeback. Presumably, not posting new #content for several days had demolished his #brand and following.

Black attempted to procure a new generation of wireless implant. This would allow him to access nearby devices, overhear radio-based communications, and rapidly break encryptions. However, there were but three people in Gotham who could implant this tech.

Batgirl prevented his first attempt, but not his second. By the time she could come in, the implantations had already been done. However, she used a taser to fry the implant in Riot Black’s head.

Dazed, Riot Black was arrested by the GCPD.

About every square inch of Riot Black is covered with random tats, piercings, street-style jewellery, etc..

In his first appearance, his dialog was full of #hashtags. This little joke wouldn’t work in a TTRPG, though. Well, you could mime hashtags before #keywords with your #fingers, but I don’t think it’ll work.

Your typical malignant narcissist edgelord. He revels in attention, fame and making others suffer.

Riot Black is also overconfident, and convinced that he’s so kewl he can’t possibly be stopped.

This is of course reinforced by being cheered on by thousands of arseholes who want to watch him humiliate random nobodies, and wreck their life.

His life is meant to be a never-ending touchdown dance, boasting of his ability to harm others and turn them into a lurid, flash-in-the-pan merchandise. Hey, at least he’s more honest about it than Facebook.

“YEEEAAAAH ! Take it off and get grabby, #angels ! Do it ! Do it, and DM me the pics ! Send me enough and I’ll Black Book a dork named Arty L. Gibbons laid up in St. Mark’s Hospital. I got me some nas-tay pictures of his condition from an orderly and I guarantee you will laugh your collective asses off !”

“’sup, ladies ? Come on babes, show us the goods ! The camera loves boobs as much as blood !” 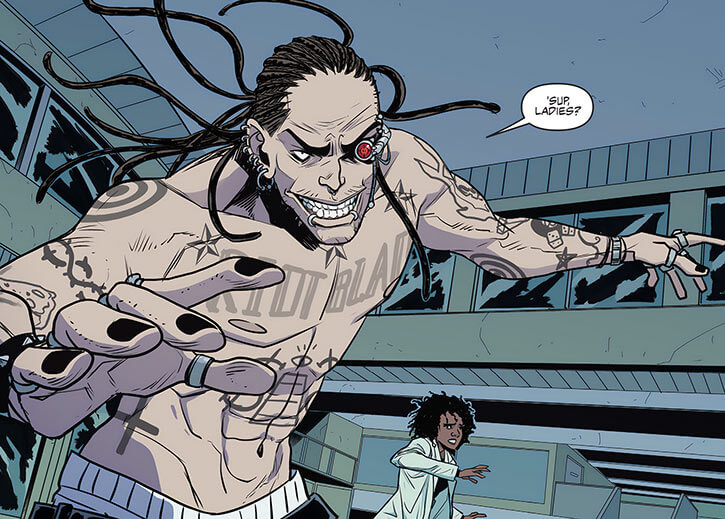 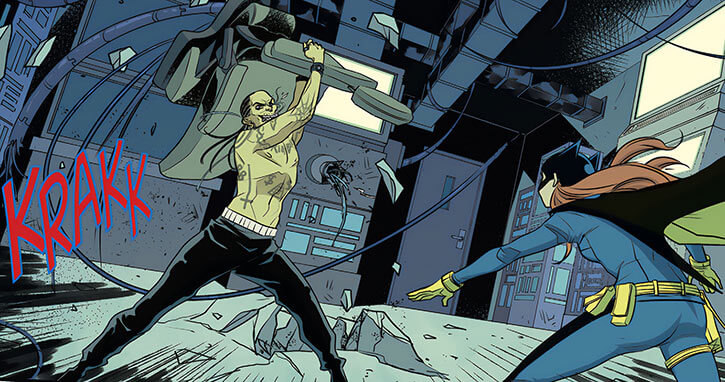 The experimental implant likely had Super-hearing (only to listen to radio signals): 06, Interface (only for data transfers): 06 and Scientist (Computers): 06 with Expertise (Hacking) and Scholar (Decryption).

It also likely upped his Security Systems to 06.

As often, STR 06 offers a convenient space where the character has manifestly superhuman strength, yet doesn’t hit harder than an elite hand-to-hand fighter. Which does model his performance against Batgirl.

Uncertainty will manifest as such things as overconfidence, toying with his target or attempting to look cool and powerful rather than acting.

His Wealth presumably went down (003 ?) after Babs destroyed his data.

He also may have had Local Hero with his #fans at the peak of his celebrity.