Because it was the 80’s, and some of us fondly remember the music, over the top hair styles and clothes from that time period.

Jem and the Holograms was an American animated television series that ran from 1985 to 1988. The series was a joint collaboration by Hasbro, Marvel Productions and Sunbow Productions, the same team responsible for G.I. Joe and Transformers.

The creator of the series, Christy Marx , had also been a staff writer for the aforementioned programs. The animation was provided by the Japanese animation studio Toei Doga (now Toei Animation).

Although this animated series could easily be dismissed as just a soap opera for little girls, it had well written characters. The antagonists of the series (mainly the Misfits, and later the Stingers) were enjoyable to watch as scene stealers. And the music wasn’t all that bad either.

A highly talented vocal artist, Riot has been known to either cause mob frenzies or quell them equally fast. This is done with the power of his musical abilities and incredible charisma, and was demonstrated when he was first introduced in the series.

He was able to immediately charm both Jem (the star of the show) and Pizzazz (her antagonist) upon their first encounter. Of course, Jem was able to do likewise to Riot with her own musical talent and attractiveness.

Riot was born Rory Llewelyn to a stern military father and protective mother. The family moved around a lot due to his father’s military career. Rory didn’t have many friends growing up. Rory did have a natural talent for music which his mother nurtured, but his father attempted to discourage.

Rory’s father considered musical abilities unmanly for his son. Therefore, he would beat and/or punish Rory whenever he caught the child practicing his musical talents.

To appease his father, Rory enlisted in the military when he was old enough. But he hated it as soon as he entered the service. It was during a tour of duty in Europe that US Army service member Rory happened upon a local night club. Therein, Minx was performing with her band. The band was struggling until Rory offered to lend his talents.

Rory began to spend so much time with the band he neglected to return or even inform his military command. Rory was soon arrested by the Military Police for being away without leave. He was later discharged from the service. A situation that brought even more intense friction between Rory and his father.

Renaming himself Riot, Rory was now free to pursue his musical career. Which he did with a passion. He returned to Minx and her band in order to go on tour with them. After a few gigs the band began to gain popularity thanks to Riot’s talent. This caused animosity and resentment with the original band leader and lead singer.

A heated argument ensued. Riot stated that the band would be nothing if not for his vocal talents. The band leader angrily ordered Riot to leave just as Riot told him he had decided to quit and strike out on his own.

Minx, knowing she stood a much better chance with the more talented Riot, also left. She formed a new band with Riot as leader. The two were joined by Rapture later on and the three formed the Stingers.

Watch out for the Stingers

Gaining popularity throughout Europe, the Stingers made their way to the US to expand their fan base. The Stingers were an instant smash hit there. Riot also managed to capture the immediate attentions of competing female band leaders Jem of Jem and the Holograms, and Pizzazz of the Misfits.

Eric Raymond of Misfit Music decided to capitalize on the Stingers growing fame and made an offer. Jem, not wanting to lose out on an opportunity to expand her own music label, also made an offer to Riot and the Stingers.

At first, Riot courted Jem, as he was fascinated by her beauty and charm. He later revealed that his goal was to have his band become the top performing artists in the world. Joining a powerful record company would help him achieve his goals.

He was divided between the more financially successful and flamboyant Misfit Music record company owned by Eric Raymond, or the more beautiful Jem and her modest Starlight Music company.

The deal is sealed

In the end, Riot decided to go with Eric Raymond who made him an offer he couldn’t refuse. Eric made Riot a full fledged partner of his record company. He even changed the name of the company from Misfit Music to Stinger Sound.

With a new company and a rising music group, Riot had achieved his goals. He was now set to conquer the musical world.

Charming and suave when he wants to be, Riot has displayed an almost Machiavellian level of ruthlessness when it comes to business. His major priority is making sure he and his band the Stingers are the top leading musical artists in the field.

Aja (confronting Riot, Minx and Rapture about their attitude and behavior): “You’re nothing but a bunch of egotistical snobs !”
Riot: “We are what we are.”

Although Riot and the Stingers are best suited in the Jem and the Holograms animated universe, they could possibly make an appearance as musical celebrities (albeit 80’s celebs) in the DCU.

Drawbacks:
MIA to achieving success for himself and his band the Stingers, MIA to Jem, Public Identity, Misc.: Riot was dishonorably discharged from the military (0 pts).

Source of Character: Jem and the Holograms. 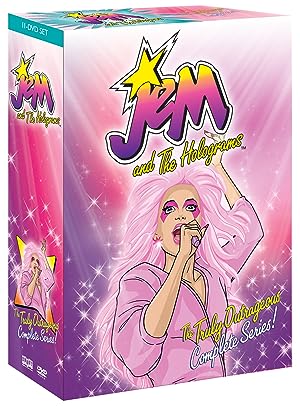 Jem and the Holograms: The Truly Outrageous Complete Series